Brené Brown:- Brené Brown (born November 18, 1965) is a research professor at the University of Houston where she holds the Huffington Foundation – Brené Brown Endowed Chair at The Graduate College of Social Work.

Brown was baptized in the Episcopal church and then later brought up Catholic. She left the church for two decades and later returned to it with her husband and children. 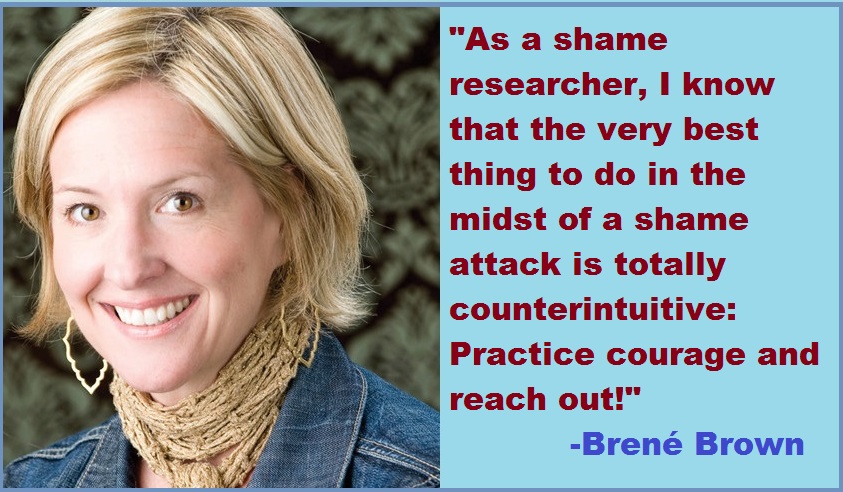 “As a shame researcher, I know that the very best thing to do in the midst of a shame attack is totally counterintuitive: Practice courage and reach out!”-Brené Brown

“Anonymous comments? You’re not in the arena, man. If you can’t say it to me in person in front of my kids, don’t say it.”-Brené Brown

“As a vulnerability researcher, the greatest barrier I see is our low tolerance for vulnerability. We’re almost afraid to be happy. We feel like it’s inviting disaster.”-Brené Brown

“As unique as we all are, an awful lot of us want the same things. We want to shake up our current less-than-fulfilling lives. We want to be happier, more loving, forgiving and connected with the people around us.”-Brené Brown

“Crazy-busy’ is a great armor, it’s a great way for numbing. What a lot of us do is that we stay so busy, and so out in front of our life, that the truth of how we’re feeling and what we really need can’t catch up with us.”-Brené Brown

“Daring to set boundaries is about having the courage to love ourselves, even when we risk disappointing others.”-Brené Brown

“Faith minus vulnerability and mystery equal extremism. If you’ve got all the answers, then don’t call what you do ‘faith.”-Brené Brown

“For me, the opposite of scarcity is not abundance. It’s enough. I’m enough. My kids are enough.”-Brené Brown

“First and foremost, we need to be the adults we want our children to be. We should watch our own gossiping and anger. We should model the kindness we want to see.”-Brené Brown 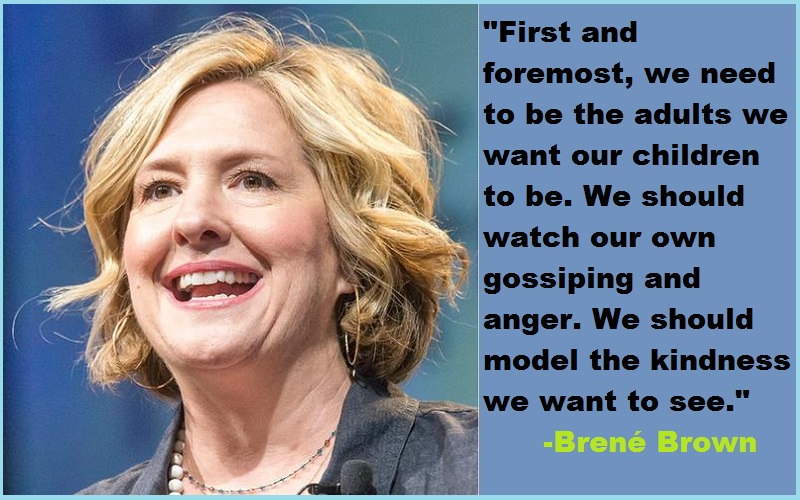 “Guilt is just as powerful, but its influence is positive, while shame’s is destructive. Shame erodes our courage and fuels disengagement.”-Brené Brown

“I can encourage my daughter to love her body, but what really matters are the observations she makes about my relationship with my own body.”-Brené Brown

“I carry a small sheet of paper in my wallet that has written on it the names of people whose opinions of me matter. To be on that list, you have to love me for my strengths and struggles.”-Brené Brown

“I don’t have to chase extraordinary moments to find happiness – it’s right in front of me if I’m paying attention and practicing gratitude.”-Brené Brown

“I hesitate to use a pathologizing label, but underneath the so-called narcissistic personality is definitely a shame and the paralyzing fear of being ordinary.”-Brené Brown

“I love to take, process and share photos – it fills me up.”-Brené Brown

“I think our capacity for wholeheartedness can never be greater than our willingness to be broken-hearted. It means engaging with the world from a place of vulnerability and worthiness.”-Brené Brown

“If you think to deal with issues like worthiness and authenticity and vulnerability are not worthwhile because there are more pressing issues, like the bottom line or attendance or standardized test scores, you are sad, sadly mistaken. It underpins everything.”-Brené Brown

“I’m just going to say it: I’m pro-guilt. Guilt is good. Guilt helps us stay on track because it’s about our behavior. It occurs when we compare something we’ve done – or failed to do – with our personal values.”-Brené Brown

“I’m like a recovering perfectionist. For me, it’s one day at a time.”-Brené Brown

“In many ways, September feels like the busiest time of the year: The kids go back to school, work piles up after the summer’s dog days, and Thanksgiving is suddenly upon us.”-Brené Brown

“In my research, I’ve interviewed a lot of people who never fit in, who are what you might call ‘different’: scientists, artists, thinkers. And if you drop down deep into their work and who they are, there is a tremendous amount of self-acceptance.”-Brené Brown

“Ironically, parenting is a shame and judgment minefield precisely because most of us are wading through uncertainty and self-doubt when it comes to raising our children.”-Brené Brown

“It’s hard to practice compassion when we’re struggling with our authenticity or when our own worthiness is off-balance.”-Brené Brown

“I’ve learned a lot since I was a new mother. My approach to struggle and shame now is to talk to yourself like you’d talk to someone you love and reach out to tell your story.”-Brené Brown

“Kids who have an understanding of how and why their feelings are what they are much more likely to talk to us about what’s happening, and they have better skills to work it out.”-Brené Brown

“Live-tweeting your bikini wax is not a vulnerability. Nor is posting a blow-by-blow of your divorce. That’s an attempt to hot-wire connection. But you can’t cheat real connection. It’s built up slowly. It’s about trust and time.”-Brené Brown

“Many people think of perfectionism as striving to be your best, but it is not about self-improvement; it’s about earning approval and acceptance.”-Brené Brown

“Maybe stories are just data with a soul.”-Brené Brown

“Men walk this tightrope where any sign of weakness elicits shame, and so they’re afraid to make themselves vulnerable for fear of looking weak.”-Brené Brown

“My husband’s a pediatrician, so he and I talk about parenting all the time. You can’t raise children who have more shame resilience than you do.”-Brené Brown

“One thing that I tell people all the time is, ‘I’m not going to answer a call from you after nine o’clock at night or before nine o’clock in the morning unless it’s an emergency.”-Brené Brown

“Our need for certainty in an endeavor as uncertain as raising children makes explicit ‘how-to-parent’ strategies both seductive and dangerous.”-Brené Brown

“Shame is the most powerful, master emotion. It’s the fear that we’re not good enough.”-Brené Brown

“Social media has given us this idea that we should all have a posse of friends when in reality, if we have one or two really good friends, we are lucky.”-Brené Brown

“The difficult thing is that vulnerability is the first thing I look for in you and the last thing I’m willing to show you. In you, it’s courage and daring. In me, it’s a weakness.”-Brené Brown

“The intention and outcome of vulnerability is trust, intimacy, and connection. The outcome of oversharing is distrust, disconnection – and usually a little judgment.”-Brené Brown

“The moment someone asks you to do something you don’t have the time or inclination to do is fraught with vulnerability.”-Brené Brown

“The truth is: Belonging starts with self-acceptance. Your level of belonging, in fact, can never be greater than your level of self-acceptance, because believing that you’re enough is what gives you the courage to be authentic, vulnerable and imperfect.”-Brené Brown

“The uncertainty of parenting can bring up feelings in us that range from frustration to terror.”-Brené Brown

“There is no innovation and creativity without failure. Period.”-Brené Brown

“Through my research, I found that vulnerability is the glue that holds relationships together. It’s the magic sauce.”-Brené Brown

“To me, a leader is someone who holds her- or himself accountable for finding potential in people and processes. And so what I think is really important is sustainability.”-Brené Brown

“The vulnerability is about showing up and being seen. It’s tough to do that when we’re terrified about what people might see or think.”-Brené Brown

“The vulnerability is basically uncertainty, risk, and emotional exposure.”-Brené Brown

“The vulnerability is not weakness. And that myth is profoundly dangerous.”-Brené Brown

“The vulnerability is the birthplace of connection and the path to the feeling of worthiness. If it doesn’t feel vulnerable, the sharing is probably not constructive.”-Brené Brown

“We judge people in areas where we’re vulnerable to shame, especially picking folks who are doing worse than we’re doing.”-Brené Brown

“We use work to numb out. We can’t turn off our machines because we’re afraid we’re going to miss something.”-Brené Brown

“We’re hardwired for connection. There’s no arguing with the bioscience. But we can want it so badly we’re trying to hot-wire it.”-Brené Brown

“What’s the greater risk? Letting go of what people think – or letting go of how I feel, what I believe, and who I am?”-Brené Brown

“When the people we love stop paying attention, trust begins to slip away and hurt starts seeping in.”-Brené Brown

“When we’re looking for compassion, we need someone who is deeply rooted, is able to bend and, most of all, embrace us for our strengths and struggles.”-Brené Brown

“When you get to a place where you understand that love and belonging, your worthiness is a birthright and not something you have to earn, anything is possible.”-Brené Brown

“You’re imperfect, and you’re wired for struggle, but you are worthy of love and belonging.”-Brené Brown