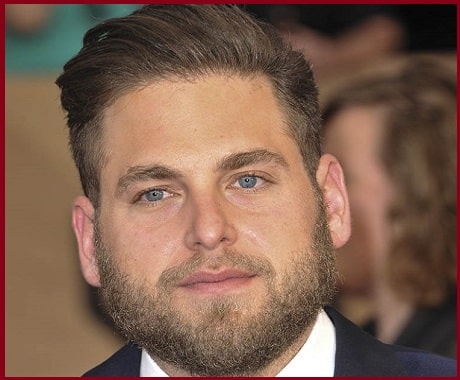 Jonah Hill Quotes:- Jonah Hill (born December 20, 1983) is an American actor, director, producer, screenwriter, and comedian. Hill is known for his comedic roles in films including Superbad, Knocked Up, Forgetting Sarah Marshall, Get Him to the Greek, 21 Jump Street, This Is the End, and 22 Jump Street as well as his performances in Moneyball and The Wolf of Wall Street, for which he received Academy Award nominations for Best Supporting Actor.

“I play a lot of games on my iPhone. There is a game called Rat on a Scooter that I will promote as much as possible because it has brought me so much joy.”-Jonah Hill 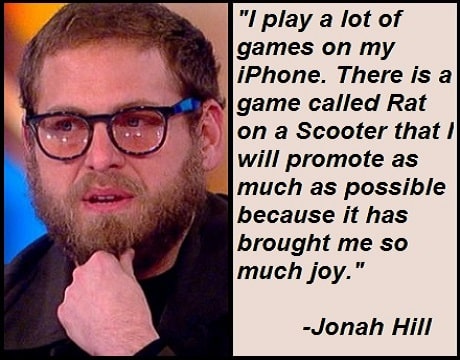 “Stanley Kubrick made Shelly Duvall go crazy during ‘The Shining.’ It’s like one of the best performances ever. Maybe he shouldn’t have gone that far, but I love that movie.”-Jonah Hill

“I always wanted to be a film-maker when I was younger, not an actor. I was an eight-year-old who dreamed of being a writer on ‘The Simpsons,’ which was a weird dream to have. But I started taking acting classes as a way to learn how to direct actors and I sort of fell in love with it.”-Jonah Hill

“I’m really proud of ‘Moneyball.’ To me, it’s about feeling pride in a movie I made. I think when I’m an old man I’ll be able to show it to my grandkids with pride. That’s all I can really go for: making movies to please me.”-Jonah Hill

“Professionally, I feel like I won the lottery and I am the luckiest person in the entire world.”-Jonah Hill

“I’ve never had issues with popularity. I was always a popular guy… I’ve always had friends and loved ones and everything, so it wasn’t like, ‘Oh man, I gotta fill some void that was left by high school.’ I had a great high-school experience.”-Jonah Hill

“Besides the fact that I make movies, there’s nothing interesting about my life at all, unfortunately.”-Jonah Hill

“I believe in collaboration. I think that is the most entertaining and effective way to write for me, personally.”-Jonah Hill

“I love my parents. But I’m almost 28 and it’s not fun to be asked, ‘What are you doing today? What do you want for dinner? When are you going to be home?’ It just makes you feel like a kid. It’s this juxtaposition of feeling annoyed and really lucky to have people who love you so much.”-Jonah Hill

“21 Jump Street’ is great. I just made that, and produced it and was a writer on it. It’s starring myself and Channing Tatum, and maybe some surprise guests.”-Jonah Hill

“I just like to act and write and produce. To me, making movies is the ultimate goal.”-Jonah Hill

“I started writing and acting in these little plays and then I was discovered by Dustin Hoffman. He got me my first audition for a film he was in, called ‘I Heart Huckabees.”-Jonah Hill

“I run and do a lot of push-ups and eat healthily.”-Jonah Hill

“I’ve learned through the experience of playing different characters, some of whom were jerks, that when you play a character who is pretentious or obnoxious, in any way, it’s important to knock them down a peg.”-Jonah Hill

“I assume everything I do in life is gonna be a failure, and then if it turns up roses, then I’m psyched.”-Jonah Hill

“The fact that the Kardashians could be more popular than a show like ‘Mad Men’ is disgusting. It’s a super disgusting part of our culture, but I still find it funny to make a joke about it.”-Jonah Hill

“I mean, I find things that happened in real life to be the funniest – things that you observe instead of crazy abstract things, you know.”-Jonah Hill

“Funny People’ is my favorite performance of myself to date. Even though it’s a comedy and there are serious moments, I really felt like Leo felt like a real person. It didn’t feel like I was playing myself. Whether it’s a comedy or drama, I just try to make it as realistic as possible.”-Jonah Hill

“Germany’s amongst my top three places in the world I’d like to live in.”-Jonah Hill

“I really care about this stuff, I care about movies, and you just have to be strong and don’t be stupid; freedom of choice is a big responsibility, and I’m lucky enough not to have to just take any movie to pay the rent, so there’s no need to be greedy.”-Jonah Hill

“One of the greatest moments of my career was on the road promoting ‘Superbad’ with Michael Cera and Chris Mintz-Plasse. We were showing the movie at colleges.”-Jonah Hill

“New Orleans is like the bad-kid island in ‘Pinocchio.”-Jonah Hill

“When I first met the world, basically, or introduced myself to people, I was in ‘Superbad,’ and I feel the same way I felt promoting ‘Superbad’ in an underdog style that I feel promoting ‘Moneyball.'”-Jonah Hill

“Once you make a movie like ‘Superbad,’ when it’s popular and you’re the lead, you get offered all kinds of things and there’s a temptation to make bad movies either for the money or to maintain your relevance in pop culture.”-Jonah Hill

“A whole generation was raised to learn about comedy from ‘The Simpsons.’ To get to be in a booth with Homer and Marge and be in Springfield – it was unimaginable the emotions that I felt.”-Jonah Hill

“I think a lot of actors, sometimes what happens I think is that actors finish a movie and they go, ‘Oh my god, I’m never going to work again,’ even big huge actors, and so they’ll take something thinking that something else will never come along.”-Jonah Hill

“I think our culture has gotten so skewed. People assume that because you’re an actor you want to write a book to exploit your celebrity, but my celebrity is only a byproduct of me making movies. I have no intention of being a celebrity.”-Jonah Hill

“Look, at the same time that I don’t want to be a celebrity, I understand that when you make movies you put yourself out in the public eye. I’d be a baby and a fool to be like, ‘Why are their cameras taking pictures of me?’ when I’m on a billboard for a movie. I think that’s a very absurd concept.”-Jonah Hill

“Writing is as big a part of my career as acting is, financially and time-wise. So, yeah, I love it. That’s all I wanted to do since I was young was to be a writer. So that and acting are the two most important aspects of my career.”-Jonah Hill

“Allen Gregory’ came about because we wanted an animated show and we were just tossing around some ideas about me playing a 7-year-old. We thought that would be cool because we couldn’t do that in real life.”-Jonah Hill

“The great thing about ‘Allen Gregory’ is that we try to make it really questionable that the things he says have happened, have really happened. We like that ambiguity.”-Jonah Hill

“I learn a lot from every director that I work with. I sit on set and watch them, everyone.”-Jonah Hill

“Albert Brooks is definitely one of my biggest influences, for sure.”-Jonah Hill

“I am a filmmaker fanatic. I have never been star-struck by an actor once in my entire life.”-Jonah Hill

“I’m an actor, I’m not a comedian, I never was a comedian.”-Jonah Hill

“It’s almost like when someone plays poker for the first time, they might be a professional poker player out of ignorance, just accidentally winning. That was how it felt in my first stand-up appearance.”-Jonah Hill

“Yeah, I grew up in the public eye. I became a man in the public eye, which is kind of a bizarre thing to come to terms with. Now I’m in my late 20s and I was in my early 20s when I became recognizable. But I think ‘Moneyball’ represents a very strong shift in my career and becoming an adult and a man.”-Jonah Hill

“It’s always better to shock people and change people’s expectations than to give them exactly what they think you can do. It’s not unexpected for me to be in a comedy film anymore; I’m no longer the underdog in that world. Not that I’m great or good at it or anything, it’s just that I’ve done a bunch of them, so you’re not shocked.”-Jonah Hill

“All my friends were in college when I was making ‘Superbad.’ We were drinking beer and watching movies and eating pizza. It wasn’t like I was going to nice restaurants or anything like that, and I lived like a frat guy. Eventually, it was time to grow up, be healthy and be responsible. You can’t live like a kid forever, you know?”-Jonah Hill