Failure Quotes:- Failure is the state or condition of not meeting a desirable or intended objective and may be viewed as the opposite of success.

Product failure ranges from failure to sell the product to fracture of the product, in the worst cases leading to personal injury, the province of forensic engineering.

Below you will find our collection of inspirational, wise, and humorous old failure quotes, failure sayings, and failure proverbs, collected over the years from a variety of sources. 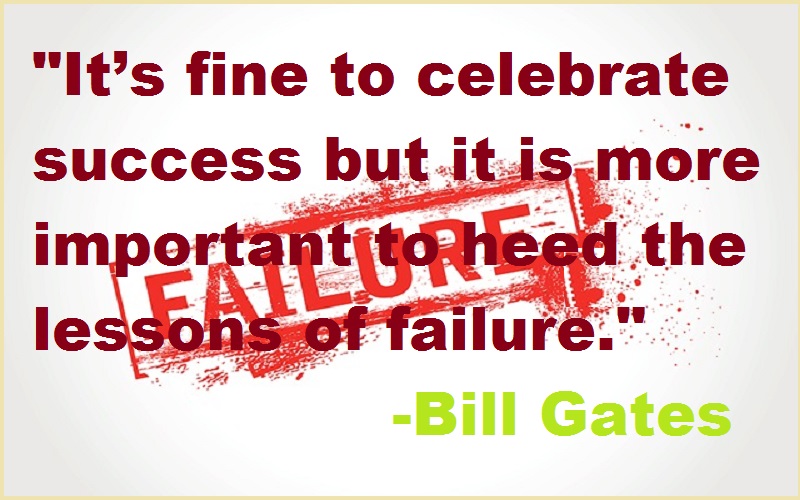 “It’s fine to celebrate success but it is more important to heed the lessons of failure.”-Bill Gates

“Failure is enriching. It’s also important to accept that you’ll make mistakes—it’s how you build your expertise. The trick is to learn a positive lesson from all of life’s negative moments.”-Alain Ducasse

“We need to accept that we won’t always make the right decisions, that we’ll screw up royally sometimes—understanding that failure is not the opposite of success, it’s part of success.”-Arianna Huffington

“Just because you fail once doesn’t mean you’re gonna fail at everything.”-Marilyn Monroe

“I’ve come to believe that all my past failure and frustrations were actually laying the foundation for the understandings that have created the new level of living I now enjoy.”-Tony Robbins

“You have to be able to accept failure to get better.”-LeBron James

“Think like a queen. A queen is not afraid to fail. Failure is another steppingstone to greatness.”-Oprah Winfrey

“It is hard to fail, but it is worse never to have tried to succeed.”-Theodore Roosevelt

“Failure is the foundation of success and the means by which it is achieved.”-Lao Tzu

“Mistakes are the portals of discovery.”-James Joyce

“If you fell down yesterday, stand up today.”-H.G. Wells

“Failure is a success if we learn from it.”-Malcolm Forbes

“Our greatest glory is not in never failing, but in rising every time we fail.”-Confucious

‘Negative results are just what I want. They’re just as valuable to me as positive results. I can never find the thing that does the job best until I find the ones that don’t.”-Thomas A. Edison

“Success is not a good teacher, failure makes you humble.”-Shah Rukh Khan

“The only real failure in life is not to be true to the best one knows.”-Buddha

“Sometimes by losing a battle, you find a new way to win the war.

“I can accept failure, everyone fails at something. But I can’t accept not trying.”-Michael Jordan

“Failure is the condiment that gives success its flavor.”-Truman Capote

“Like success, failure is many things to many people. With a positive mental attitude, failure is a learning experience, a rung on the ladder, a plateau at which to get your thoughts in order and prepare to try again.”-W. Clement Stone

“If you try to be anyone but yourself, you will fail; if you are not true to your own heart, you will fail. Then again, there’s no success like failure.”-Bob Dylan

“I think you have to try and fail because failure gets you closer to what you’re good at.”-Louis C.K.

“Any man can make mistakes, but only an idiot persists in his error.”-Cicero

“Success is not final, failure is not fatal: it is the courage to continue that counts.”-Winston Churchill

“Failure after long perseverance is much grander than never to have a striving good enough to be called a failure.”-George Eliot

“There is only one thing that makes a dream impossible to achieve: the fear of failure.”-Paulo Coelho

“Failure is unimportant. It takes courage to make a fool of yourself.”-Charlie Chaplin