Track And Field Quotes:- Track and field is a sport which includes athletic contests established on the skills of running, jumping, and throwing.

The name is derived from the sport’s typical venue: a stadium with an oval running track enclosing a grass field where the throwing and some of the jumping events take place.

“Track and field is the best way to reach out for kids. It doesn’t matter how fast you are. You always want to beat someone.”-Carl Lewis 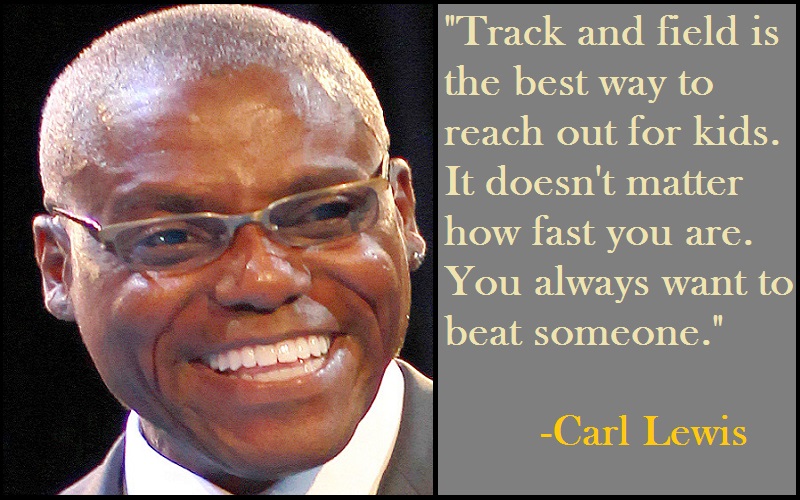 “Running is a thing worth doing not because of the future rewards it bestows, but because of how it feeds our bodies and minds and souls in the present.”-Kevin Nelson

“The true measure of a runner isn’t in time, but rather in the effort it took along the way.”-Jenny Hadfield

“Life is often compared to a marathon, but I think it is more like being a sprinter; long stretches of hard work punctuated by brief moments in which we are given the opportunity to perform at our best.”-Michael Johnson

“It’s very hard, in the beginning, to understand that the whole idea is not to beat the other runners. Eventually, you learn that the competition is against the little voice inside you that wants you to quit.”-George Sheehan

“The gun goes off and everything changes the world changes and nothing else really matters.”-Patti Sue Plummer

“Track is such a great metaphor for life…You try to jump as from where you started as you can, you throw all the heavy stuff away from you, and when life’s hurdles knock you down, you get right back up.”-unknown

“I let my feet spend as little time on the ground as possible. From the air, fast down, and from the ground, fast up.”-Jesse Owens

“Scientists have proven that it’s impossible to long-jump 30 feet, but I don’t listen to that kind of talk. Thoughts like that have a way of sinking into your feet.”-Carl Lewis

“The art form is to become one with the hurdle, to make it your friend, and I embraced that process.”-Renaldo Nehemiah

“I never really worried about those hurdles. They were just standing there, and I was always zooming past them just to get back on the ground again.”-Rod Milburn

“The hurdles have taught me that if you work really, really hard at perfecting the little things in your life, the big picture will come together.”-John Shaffer

“A good hurdler has to be completely familiar with everything that goes on so if something happens he can automatically make an adjustment.”-Rodney Milburn

“I’m going to go and leave my blood all over the track.”-Nick Rogers

“The longer the race, the shorter the champ.”-Manciata

“Somewhere in the world, someone is training when you are not. When you race him, he will win.”-Tom Fleming

“While a man is racing he must hate himself and his competitors.”-Percy Cerutty

“There is no time to think about how much I hurt; there is only time to run.”-Ben Logsdon

“Running is like mouthwash; if you can feel the burn, it’s working.”-Brian Tackett

“If I am still standing at the end of the race, hit me with a board and knock me down, because that means I didn’t run hard enough.”-Steve Jones

“You must see yourself run the race over and over, time and time again. You must put yourself in critical positions and see how you would react in those positions before the race so when and if they do happen, the feedback is automatic.”-Rodney Milburn