Tv Quotes:- Television (TV), sometimes shortened to tele or telly, is a telecommunication medium used for transmitting moving images in monochrome (black and white), or in color, and in two or three dimensions and sound. The term can refer to a television set, a television program (“TV show”), or the medium of television transmission. Television is a mass medium for advertising, entertainment, and news.

Below you will find our collection of inspirational, wise, and humorous old tv quotes, tv sayings, and tv proverbs, collected over the years from a variety of sources. 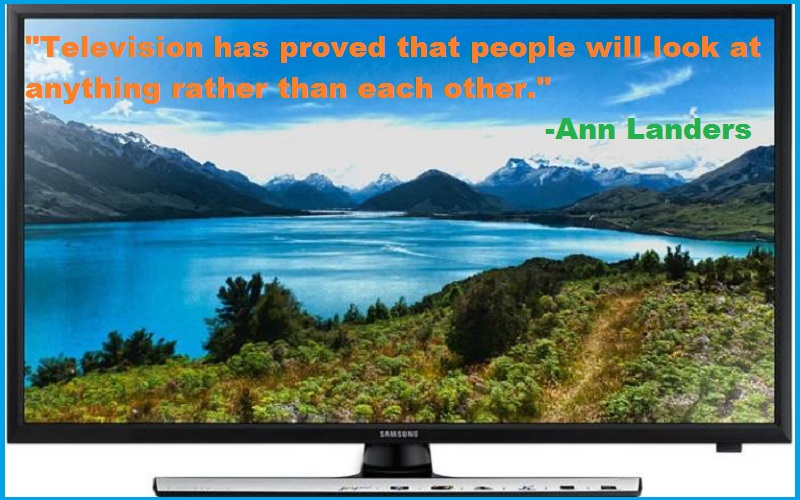 “Television has proved that people will look at anything rather than each other.”-Ann Landers

“TV is bigger than any story it reports. It’s the greatest teaching tool since the printing press.”-Fred Friendly

“Watching television is like taking black spray paint to your third eye.”-Bill Hicks

“Television is the menace that everyone loves to hate but can’t seem to live without.”-Paddy Chayefsky

“We’re all watching each other, so there’s no chance for censorship. The main problem is the idiot TV. If you watch local news, your head will turn to mush.”-Ray Bradbury

“Television is a triumph of equipment over people, and the minds that control it are so small that you could put them in a gnat’s navel with room left over for two caraway seeds and an agent’s heart.”-Fred Allen

“And I believe that good journalism, good television, can make our world a better place.”-Christiane Amanpour

“Television makes so much at its worst that it can’t afford to do its best.”-Fred W. Friendly

“Television was not intended to make human beings vacuous, but it is an emanation of their vacuity.”-Malcolm Muggeridge

“Being on TV is similar to being an athlete. You get no second chances.”-Lara Spencer

“Television is now so desperately hungry for material that they’re scraping the top of the barrel.”-Gore Vidal

“You see reality TV and it’s not reality TV. It’s contrived and everything is plotted and scripted nearly. Documentaries are the same and just as bad.”-Ricky Gervais

“Television has raised writing to a new low.”-Samuel Goldwyn

“Television is basically teaching whether you want it to or not.”-Jim Henson

“The role of television is the illusion of company, noise. I call it the fifth wall and the second window: the window of illusion.”-Mumia Abu-Jamal

“Television is like the invention of indoor plumbing. It didn’t change people’s habits. It just kept them inside the house.”-Alfred Hitchcock

“Television is chewing gum for the eyes.”-Frank Lloyd Wright

“Television is becoming a college there are so many channels that you move through them making a collage yourself. In that sense, everyone sees something a bit different.”-David Hockney

“TV is a language all its own, a land of one-dimensional stereotypes that destroys culture does not add to it. The TV is anti-art, a reflection of consumerism that serves the power structure. The TV is about demographics.”-Roseanne Barr

“TV is like theater. You can’t enjoy it without a program.”-Walter Annenberg

“Television is just one more facet of that considerable segment of our society that never had any standard but the soft buck.”-Raymond Chandler

“Television is more interesting than people. If it were not, we would have people standing in the corners of our rooms.”-ALAN COREN

“Television is an invention that permits you to be entertained in your living room by people you wouldn’t have in your home.”-David Frost

“Without TV, it’s hard to know when one day ends and another begins.”-Homer

“Television should be the last mass communication medium to be naively designed and put into the world without a surgeon-general’s warning.”-Alan Kay

“Television is by nature the dominator drug par excellence. Control of content, uniformity of content, repeatability of content make it inevitably a tool of coercion, brainwashing, and manipulation.”-Terence McKenna

“Nothing is really real unless it happens on television.”-Daniel J. Boorstin

“Watching TV is companionable: you share an experience, you can comment on the action here and there for a bit of conversation it’s a way of showing someone that you want his or her company and engaging in a low-key, pleasant, undemanding way.”-Gretchen Rubin