Vodka Quotes:- Vodka is a clear distilled alcoholic beverage originating from Poland and Russia, composed primarily of water and ethanol, but sometimes with traces of impurities and flavorings.

You will find our collection of inspirational, wise, and humorous old vodka quotes, vodka sayings, and vodka proverbs, collected over the years from a variety of sources.

“There are no absolutes in life, only vodka.”-Mick Jagger 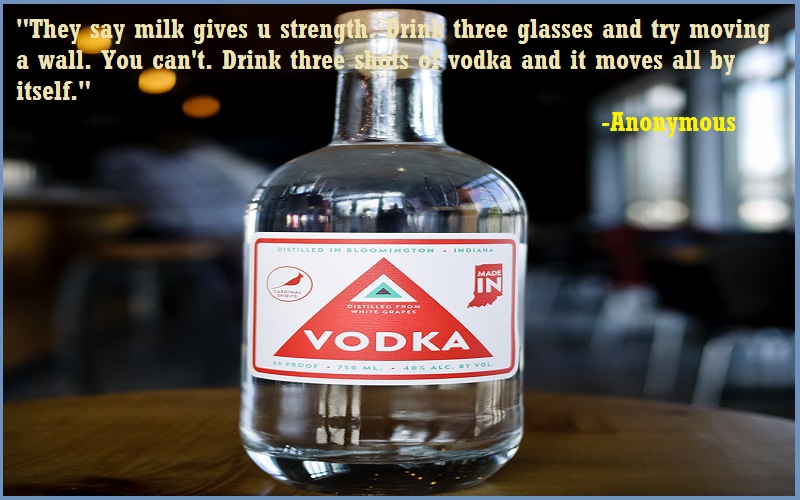 “They say milk gives u strength. Drink three glasses and try moving a wall. You can’t. Drink three shots of vodka and it moves all by itself.”-Anonymous

“Vodka is a very deceptive drink. You can’t taste it, you can’t smell it.”-Dylan Moran

“Once we hit forty, women only have about four taste buds left: one for vodka, one for wine, one for cheese, and one for chocolate.”-Gina Barreca

“Vodka is tasteless going down, but it is memorable coming up.”-Garrison Keillor

“If wine is fruit, then vodka must be a vegetable.”-Jann Arden

“We drank our coffee the Russian way. That is to say, we had vodka before it and vodka afterward.”-Philip Sington

“The key factor in the vodka category is smoothness, and smoothness is what our vodka has.”-Fuzzy Zoeller

“Vodka does not ease back pain. But it does get your mind off it.”-Fuzzy Zoeller

“Vodka is a wonderful drink. You can drink so much of it without being as hungover as you would if you were drinking one of the brown liquors the whiskeys and such. It’s a great drink to go with appetizers.”-Gary Shteyngart

“Vodka eyeballing sounds great, but it’s a slippery slope. Next, you’ll be scotch nostrils, tequila and, before you know it, Jager tainting.”-Stephen Colbert

“The relationship between a Russian and a bottle of vodka is almost mystical.”-Richard Owen

“Alcohol is the anesthesia by which we endure the operation of life.”-Samuel Johnson