Wanderlust:-The first documented use of the term in English occurred in 1902 as a reflection of what was then seen as a characteristically German predilection for wandering that may be traced back to German Romanticism and the German system of apprenticeship (the journeyman), as well as the adolescent custom of the ‘Wanderbird’ seeking unity with Nature.

Below you will find our collection of inspirational, wise, and humorous old wanderlust quotes, wanderlust sayings, and wanderlust proverbs, collected over the years from a variety of sources.

“He who would travel happily must travel light.”-Antoine de St. Exupery

“Though we travel the world over to find the beautiful, we must carry it with us or we find it not.”-Ralph Waldo Emerson 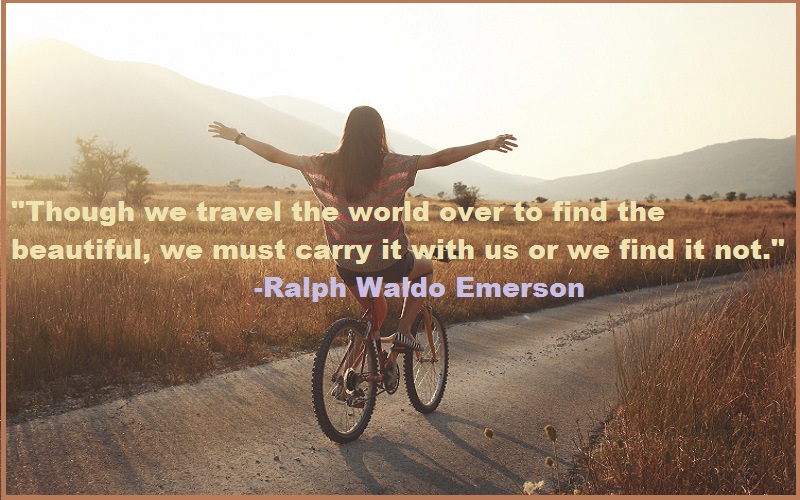 “The more I traveled the more I realized that fear makes strangers of people who should be friends.”-Shirley MacLaine

“Because he had no place he could stay in without getting tired of it and because there was nowhere to go but everywhere, keep rolling under the stars”-Jack Kerouac

“Travel makes one modest. You see what a tiny place you occupy in the world.”-Gustave Flaubert

“We live in a wonderful world that is full of beauty, charm, and adventure. There is no end to the adventures we can have if only we seek them with our eyes open.”-Jawaharlal Nehru

“Once a year, go someplace you’ve never been before.”-Dalai Lama

“The real voyage of discovery consists not in seeking new landscapes, but in having new eyes.”-Marcel Proust

“To travel is to discover that everyone is wrong about other countries.”-Aldous Huxley

“Travel is glamorous only in retrospect.”-Paul Theroux

“Certainly, travel is more than the seeing of sights; it is a change that goes on, deep and permanent, in the ideas of living.”-Miriam Beard

20 Inspirational Travel Quotes to Your Wanderlust

“Two roads diverged in a wood and me – I took the one less traveled by.”-Robert Frost

“All that is gold does not glitter, not all those who wander are lost.”-J.R.R. Tolkien

“Once you have traveled, the voyage never ends but is played out over and over again in the quietest chambers. The mind can never break off from the journey.”-Pat Conroy

“Travel is like an endless university. You never stop learning.”-Harvey Lloyd

“Traveling – it leaves you speechless, then turns you into a storyteller.”-Ibn Battuta

“We wander for distraction, but we travel for fulfillment.”-Hilaire Belloc

“The World is a book and those who do not travel read only a page.”-St. Augustine

“You don’t even know where I’m going. I don’t care. I’d like to go anywhere.”-John Steinbeck

“Wandering re-establishes the original harmony which once existed between man and the universe.”-Anatole France

“I was an adventurer, but she was not an adventuress. She was a ‘wanderers.’ Thus, she didn’t care about money, only experiences – whether they came from wealth or from poverty, it was all the same to her.”-Roman Payne

“We travel, some of us forever, to seek other places, other lives, other souls.”-Anais Nin

“Travelers never think that they are the foreigners.”-Mason Cooley

“The impulse to travel is one of the hopeful symptoms of life.”-Agnes Repplier

“Travel and change of place impart new vigor to the mind.”-Seneca

“She is free in her wildness, she is a wanderer, a drop of free water. She knows nothing of borders and cares nothing for rules or customs. ‘Time’ for her isn’t something to fight against. Her life flows clean, with passion, like fresh water.”-Roman Payne

“All journeys have secret destinations of which the traveler is unaware.”-Martin Buber

“The key to a wonderful life is to never stop wandering into wonder.”-Suzy Kassem