Wedding Advice Quotes:- When planning your wedding, there are things that are nice to know, and there are things you need to know—advice so essential any bride who’s lucky enough to hear it thinks, “I’m so glad someone told me that!” If you’re wondering whether there’s something you may have missed. 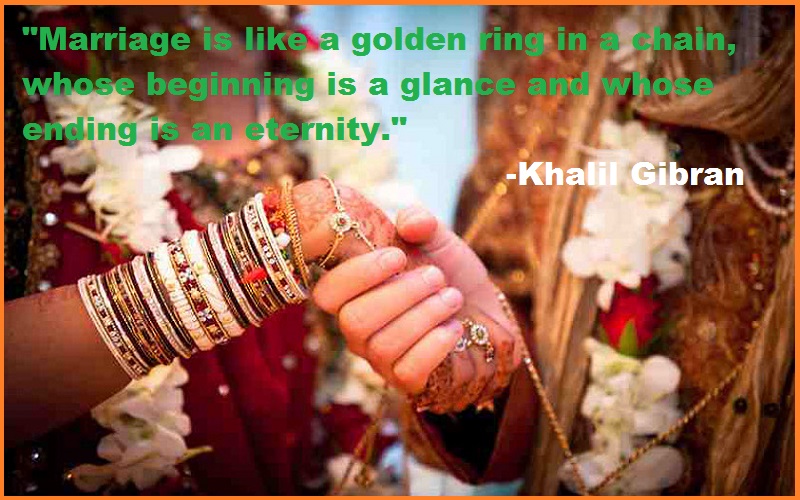 “Marriage is like a golden ring in a chain, whose beginning is a glance and whose ending is an eternity.”-Khalil Gibran

“Love is a vessel that contains both security and adventure, and commitment offers one of the great luxuries of life: time. Marriage is not the end of romance, it is the beginning.”-Esther Perel

“In every marriage more than a week old, there are grounds for divorce. The trick is to find, and continue to find, grounds for marriage.”-Robert Anderson

Ultimately the bond of all companionship, whether in marriage or in friendship, is the conversation.”-Oscar Wilde

“Every marriage tends to consist of an aristocrat and a peasant. Of a teacher and a learner.”-John Updike 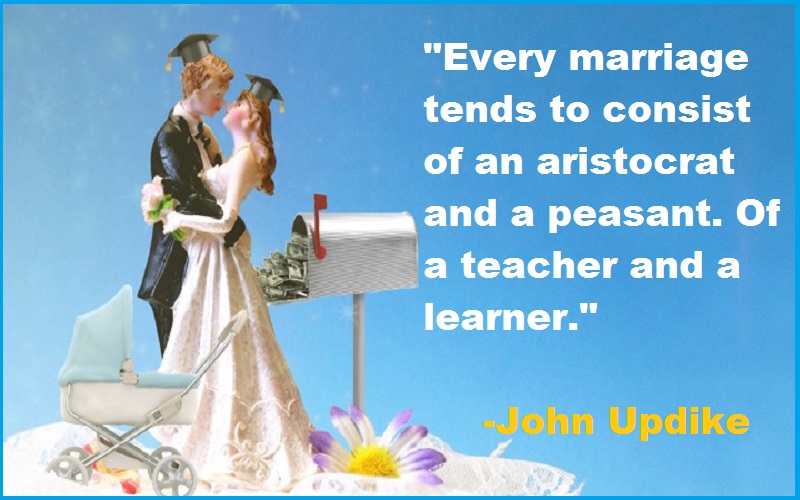 “Do everything you can to support your partner’s well-being, and respect your partner as you would your best friend.”-John Gerson

“When you give each other everything, it becomes an even trade. Each wins all.”-Lois McMaster Bujold

“Marriage is like putting your hand into a bag of snakes in the hope of pulling out an eel.”-Leonardo da Vinci

“Marriage is not about age; it’s about finding the right person.”-Sophia Bush

“Marriage is the highest state of friendship. If happy, it lessens our cares by dividing them, at the same time that it doubles our pleasures by mutual participation.”-Samuel Richardson

“Marriage is for the mature, not the infantile. The fusion of two different personalities requires emotional balance and control on the part of each person.”-Archie Lee

A successful marriage requires falling in love many times, always with the same person.”-Mignon McLaughlin

“Compatibility doesn’t determine the fate of a marriage, how you deal with the incompatibilities, does.”-Abhijit Naskar

More marriages might survive if the partners realized that sometimes the better comes after the worse.”-Doug Larson

“Happily ever after is not a fairy tale. It’s a choice.”-Fawn Weaver

“There is no greater happiness for a man than approaching a door at the end of a day knowing someone on the other side of that door is waiting for the sound of his footsteps.”-Ronald Reagan

“Marriage: a ceremony in which rings are put on the finger of the lady and through the nose of the gentleman.

“A happy marriage is the union of two good forgivers.”-Ruth Graham

“Marriage is neither heaven nor hell, it is simply purgatory.”-Abraham Lincoln

“When you make the sacrifice in marriage, you’re sacrificing not to each other but to unity in a relationship.”-Joseph Campbell

“Treat marriage like a diamond necklace; if broken, fix it, but do not throw it away.”-Matshona Dhliwayo

“It is better to get married with the mindset that you are going to give rather than get.”-Paul Silway

“We come to love not by finding a perfect person, but by learning to see an imperfect person perfectly.”-Sam Keen

“A wedding is a party, not a performance. If at the end of the day, you are married to the one you love, then everything went perfectly.”-David Tutera

“Marriage is a lot like a roller coaster. You have extreme highs and you can have some pretty extreme lows, but the ride is worth it.”-Teresa Collins