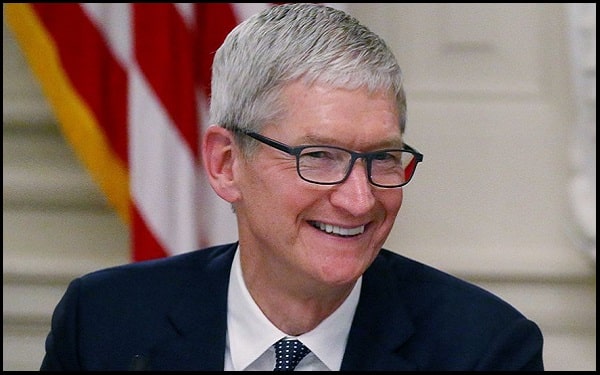 “Apple has a culture of excellence that is, I think, so unique and so special. I’m not going to witness or permit the change of it.”-Tim Cook 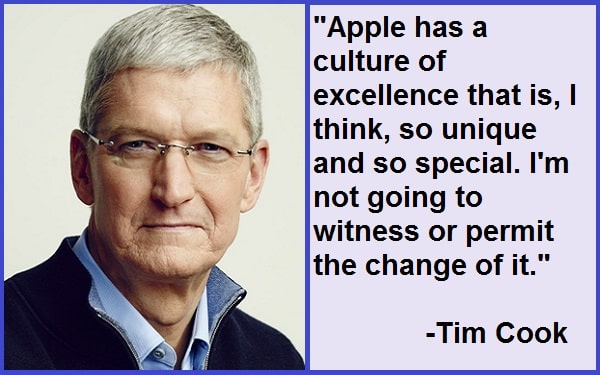 “Life is fragile. We’re not guaranteed a tomorrow so give it everything you’ve got.”-Tim Cook

“I don’t think Apple has to own a content business.”-Tim Cook

“You can converge a toaster and a refrigerator, but those things are probably not going to be pleasing to the user.”-Tim Cook

“You can only do so many things great, and you should cast aside everything else.”-Tim Cook

“Anything can change because the smartphone revolution is still in the early stages.”-Tim Cook

“I don’t really think anything Microsoft does puts pressure on Apple.”-Tim Cook

“I think two people with strong points of view can appreciate each other even more.”-Tim Coo

“From an app point of view, if you looked at innovation on the PC, you’d be hard-pressed to find companies innovating. The list is small.”-Tim Cook

“Our whole role in life is to give you something you didn’t know you wanted. And then once you get it, you can’t imagine your life without it. And you can count on Apple doing that.”-Tim Cook

“The reality is, is that we love competition, at Apple. We think it makes us all better. But we want people to invent their own stuff.”-Tim Cook

“Let your joy be in your journey – not in some distant goal.”-Tim Cook

“I hope people remember me as a good and decent man. And if they do, then that’s a success.”-Tim Cook

“At one point in time, you had to choose, ‘Do you want to do consumer or enterprise?’ But the reality today is a bit different: Enterprises are a collection of consumers.”-Tim Cook

“I think it’s smart for the United States to have some kind of tax revenue for international earnings – if that tax were reasonable.”-Tim Cook

“When technological advancement can go up so exponentially, I do think there’s a risk of losing sight of the fact that tech should serve humanity, not the other way around.”-Tim Cook

“Everybody in technology seems to want big numbers. Steve never got carried away with that. He focused on making the best.”-Tim Cook

“We have never said that we’re perfect. We’ve said that we seek that. But we sometimes fall short.”-Tim Cook

“I’ve been thinking about ‘The Jetsons’ since I was a kid. But occasionally, you want ‘The Jetsons’ to come to reality. That’s what Apple is so great at Productizing things and bringing them to you so you can be a part of it.”-Tim Cook

“People like things they can do now, not just think about it.”-Tim Cook

“We try to continually push ourselves to do more and more, not just on the hardware side but also in terms of developers’ tools so they can take advantage of the hardware that’s there, in the best way.”-Tim Cook

“I’m excited about Augmented Reality because unlike Virtual Reality, which closes the world out, AR allows individuals to be present in the world but hopefully allows an improvement on what’s happening presently.”-Tim Cook

“To me, this is the perfect marriage. There’s no friction. There’s just, we have what they need, they have what we need. And so IBM is in the process, with our help, of designing many different apps for many different verticals.”-Tim Cook

“I am very bullish on India because of its people, its culture, and the leadership. I love the culture and warmth of people.”-Tim Cook

“Every time I meet Prime Minister Modi and listen to him and then see his actions, including GST, I see bold things that I don’t see in any other place. I am super impressed and optimistic.”-Tim Cook

“The market in India is big enough for several brands. For us, it’s about innovation, making the best product, and making the ecosystem better and better. If we do that well, then more people will switch from Android to iOS.”-Tim Cook

“While infusing technology with humanity, we are trying to make sure it’s used for good and also trying to foresee some of the ways it can be used in a bad way and eliminate those.”-Tim Cook

“We shouldn’t all be fixated just on what’s not available. We should take a step back and look at the total that’s available because there’s a mountain of information about us.”-Tim Cook

“National security always matters, obviously. But the reality is that if you have an open door in your software for the good guys, the bad guys get in there, too.”-Tim Cook

“If you look at the automobile in many countries, there is a certified pre-owned market for Lexus, BMW, and many other brands. When you buy a high-end smartphone, you can expect the same kind of situation there.”-Tim Cook

“The pre-owned market allows us to reach customers who really want an Apple device but can’t really reach that point. I think it is great for people, or otherwise, we wouldn’t we do it. If we were not proud of the product, we wouldn’t be doing it.”-Tim Cook

“I don’t subscribe to the view some people have in the industry that you should purposefully design products that do not last that long. I don’t think it is good for anyone.”-Tim Cook

“When we launch a product, we’re already working on the next one. And possibly even the next, next one.”-Tim Cook

“There have been people that suggest that we should have a back door. But the reality is if you put a back door in, that back door’s for everybody – for good guys and bad guys.”-Tim Cook

“Hopefully, people will look at our stance on privacy in general and know that we’re not trying to operate outside of a fairly distinct line that we’re drawing. I hope that people trust us to do the right thing there.”-Tim Cook

“All of us technology companies need to create some tools that help diminish the volume of fake news. We must try to squeeze this without stepping on freedom of speech and of the press, but we must also help the reader.”-Tim Cook

“We think coding should be required in every school because it’s as important as any kind of the second language.”-Tim Cook

“Augmented reality will take some time to get right, but I do think that it’s profound.”-Tim Cook

“I have to feel myself doing what’s right. If I’m the arbiter of that instead of letting the guy on TV be that or someone who doesn’t know me at all, then I think that’s a much better way to live.”-Tim Cook

“The kind of investors we seek is long term because that’s how we make our decisions.”-Tim Cook

“Music’s always been at the heart of Apple. It’s deep in our DNA. We’ve sold Macs to musicians since the beginning of Macs.”-Tim Cook

“You don’t have to choose between doing good and doing well. It’s a false choice, today more than ever.”-Tim Cook

“Work takes on new meaning when you feel you are pointed in the right direction. Otherwise, it’s just a job, and life is too short for that.”-Tim Cook

“What all of us have to do is to make sure we are using AI in a way that is for the benefit of humanity, not to the detriment of humanity.”-Tim Cook

“You have to find the intersection of doing something you’re passionate about and that, at the same time, is in the service of other people. I would argue if you don’t find that intersection, you’re not going to be very happy.”-Tim Cook

“We see that in the top problems in the world between haves and have-nots, generally, we find that the root cause is education.”-Tim Cook