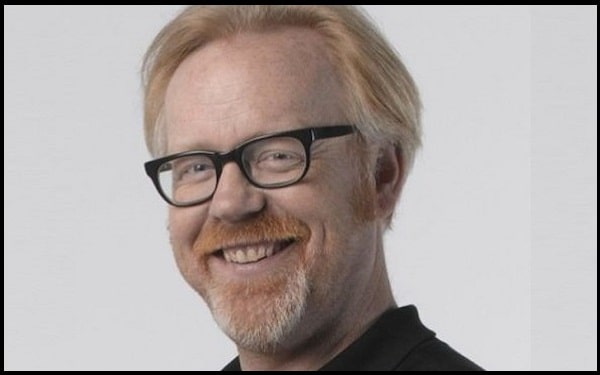 “When I finally got up to Industrial Light And Magic to work on the ‘Star Wars movies as a model-maker, it felt like dying and going to heaven.”-Adam Savage 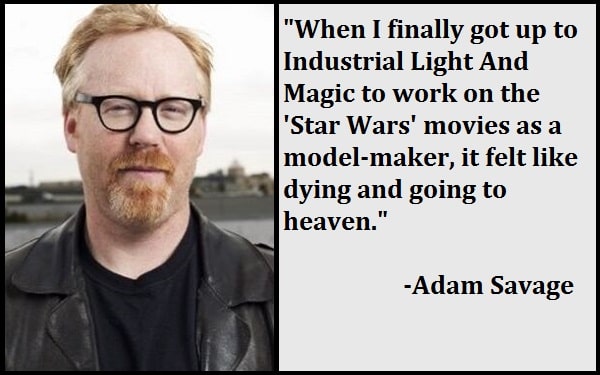 “Walking the floor at a con dressed as Chewbacca, you might as well be Bono. I mean it’s ridiculous. People just walk up and grab you and hold you, because they love Chewbacca so much.”-Adam Savage

“I have some ideas on how to fix that. They’re not very good ideas, but at least they’re ideas!”-Adam Savage

“I’m not gonna shoot anyone with the pellet gun… Not unless I have to!”-Adam Savage

“Jamie doesn’t like to do anything hastily, and I like to do everything incredibly hastily. So therein you have the dichotomy of our patterns.”-Adam Savage

“Let’s get on our knees and pray. I don’t know to whom. Is there a patron saint of ballistics gel?”-Adam Savage

“Stand back! I gotta get some rocket fuel out of the fridge!”-Adam Savage

“That aesthetic of the Star Wars universe: the do-it-yourself, hotrod ethic that George Lucas exported from his childhood, is exactly the same kind of soul behind what we do and build for the show. It may not look pretty, but it gets the job done.”-Adam Savage

“That’s the show. it’s like 5 minutes of science and then 10 minutes of me hurting myself.”-Adam Savage

“The best-case scenario is that the glass shatters in my face! How do you think that makes me feel?”-Adam Savage

“The only thing that differentiates you and me from a couple of fourteen-year-old pyromaniacs is ballistic glass!”-Adam Savage

“There is no dignity in television.”-Adam Savage

“I am now standing in a mixture of cooling fluid, gasoline, and cola.”-Adam Savage

“Again, as I said, my life has been about being fascinated by objects and the stories that they tell, and also making them for myself, obtaining them, appreciating them and diving into them.”-Adam Savage

“Being a geek is all about learning the inventories of things.”-Adam Savage

“I go home at the end of the day and I rarely talk about what I did that day. So my wife’s experience is just like that of anybody else whose husband goes away to a blue-collar job and comes home bruised and dirty and often proud of the work that they’re doing.”-Adam Savage

“We didn’t set out to be educators or even scientists, and we don’t purport that what we do is real science but we’re demonstrating a methodology by which one can engage and satisfy your curiosity.”-Adam Savage

“New York State is giant and has some of the most beautiful landscapes on the Eastern seaboard. There is so much history in New York State, from the Erie Canal to the Catskills, the birth of American stand-up comedy.”-Adam Savage

“I’ve learned over decades of building that a deadline is a potent tool for problem-solving.”-Adam Savage

“In theory, cars are fairly simple. If they don’t start, it’s either the fuel system or the electrical system. Teach yourself about the path of each in your engine and tracing it is fairly straightforward. But at the beginning, mastering each new system seems like an unreachable shore. The car is effectively a black box.”-Adam Savage

“Whether it’s the experiments on ‘MythBusters’ or my earlier work in special effects for movies, I’ve regularly had to do things that were never done before, from designing complex motion-control rigs to figuring out how to animate chocolate.”-Adam Savage

“Mostly I make lists for projects. This can be daunting. Breaking something big into its constituent parts will help you organize your thoughts, but it can also force you to confront the depth of your ignorance and the hugeness of the task. That’s OK. The project may be the lion, but the list is your whip.”-Adam Savage

“The coolest toys don’t have to be bought; they can be built. In fact, sometimes the only way they’ll ever exist is if you make them yourself.”-Adam Savage

“Technology is usually there to let some process go on hidden in the background. For us on ‘MythBusters,’ we’re always trying to make the process apparent. So, we have learned to try and never rely on a technological solution when an analog one is in front of us.”-Adam Savage

“I am incrementally a pessimist, but I see the international debate that Edward Snowden has engendered, and I think this is exactly where the discussion should be. So, I would say I’m more optimistic than pessimistic.”-Adam Savage

“The idea of an ordered and elegant universe is a lovely one. One worth clinging to. But you don’t need religion to appreciate the ordered existence. It’s not just an idea, it’s reality. We’re discovering the hidden orders of the universe every day.”-Adam Savage

“The Internet is probably the most important technological advancement of my lifetime. Its strength lies in its open architecture and its ability to allow a framework where all voices can be heard.”-Adam Savage

“I’m always going to be making costumes. It’s one of the ways I relax my brain. In addition to the pleasure of having the piece, there is a deep and abiding pleasure for me assembling something in my head – learning to know something in its totality in my head, and then putting together all the constituent parts into a cohesive whole.”-Adam Savage

“I think one of the defining moments of adulthood is the realization that nobody’s going to take care of you. That you have to do the heavy lifting while you’re here. And when you don’t, well, you suffer the consequences.”-Adam Savage