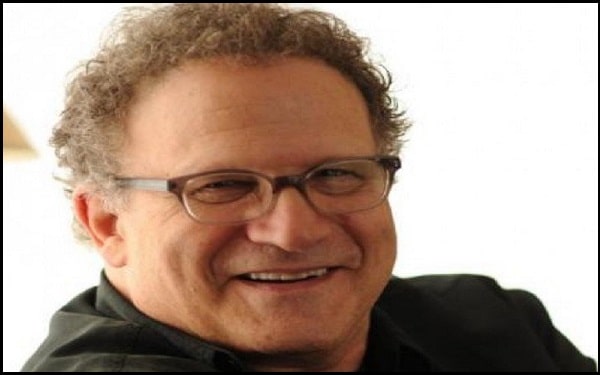 Albert Brooks Quotes:- Albert Brooks (born July 22, 1947) is an American actor, comedian, writer, and director. He received an Academy Award nomination for Best Supporting Actor for 1987’s Broadcast News and was widely praised for his performance in the 2011 film Drive.

“Even if you didn’t see the movie, you’d see two words you’d never seen put together before – comedy and Muslim. Comedy is friendly – it’s the least offensive word in our language.”-Albert Brooks 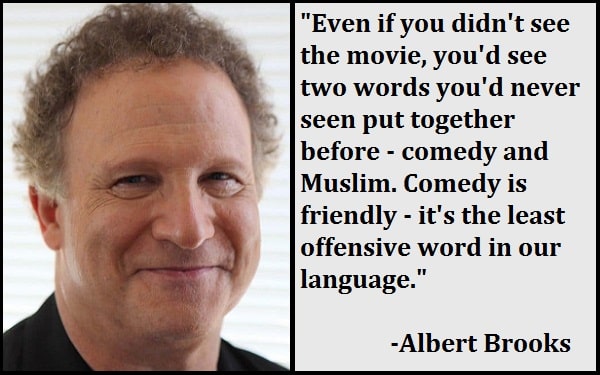 “I had a very wise person tell me that he thinks marriage when you’re younger, you keep thinking you can fix things. That’s what people do. And you can’t really fix anything. It shouldn’t be a massively difficult thing every day. Life’s difficult enough.”-Albert Brooks

“There’s always the standard six people you can hire that have played all these villains in Hollywood. Instinctively, when they come on screen, you know what’s going to happen. You don’t know the story, but you know what they do.”-Albert Brooks

“Twitter, to me, works if you’re funny. Twitter doesn’t work as a promotional tool unless you do it very, very, very occasionally.”-Albert Brooks

“I think anger and laughter are very close to each other when you think about it.”-Albert Brooks

“One of the things I like about a character: I always think it’s fascinating when a character can turn on a dime and go from one emotion to another. I like watching that.”-Albert Brooks

“I’m a member of the Academy, but I don’t know who all the other Academy members are. It’s not like a politician who knows who is in the Iowa caucus.”-Albert Brooks

“You know what it is, the reason so many 18-year-olds, 19-year-olds are saying ‘Drive’ is their favorite movie is that ‘Drive’ is a 90-minute trip into what a lot of seventies filmmaking was. It encapsulates the best of a certain kind of style, and a style that a lot of people haven’t seen before, with the music and the way it’s edited.”-Albert Brooks

“I just like making people laugh, and buried in that I like to bring up topics and start discussions.”-Albert Brooks

“What’s interesting about books that take place in the future, even twenty years in the future, is that many of them are black or white: It’s either a utopia or its misery. The real truth is that there’s going to be both things in any future, just like there is now.”-Albert Brooks

“In my screenplays – from the very beginning I’ve always used tape. I talk to my screenplays. And then have somebody transcribe them.”-Albert Brooks

“Well, you know, with every character, if you’re going to expose yourself, you’ve got to figure out every detail that you’re going to play. So there’s no character that you can just go put on his shirt and be fully prepared.”-Albert Brooks

“You know, I became a director out of necessity. I was writing comedies, and I couldn’t find anybody to deliver it correctly.”-Albert Brooks

“I cast unusual people in my movies.”-Albert Brooks

“If you want to be a writer, just write. There’s no magic to it.”-Albert Brooks

“I’m not a big fan of the post-Armageddon stories, where Denzel Washington is walking around in a torn coat.”-Albert Brooks

“Even though my father was a radio comedian, it wasn’t cool to say, at a young age, ‘I want to be a comedian.'”-Albert Brooks

“My mom was a professional. My dad and mom met each other in a movie called ‘New Faces of 1937.’ My mom went under the name Thelma Leeds, and she did a few movies, and she was really a great singer, and when she married my dad and started to have a family, she sang at parties.”-Albert Brooks

“Steven Spielberg seems to have wanted to be a director from 13. He put his dog in a certain position and made him eat at four o’clock. He liked to direct it. But, to me, directing is tedious. Especially if you’re acting in it. And I’m inherently lazy.”-Albert Brooks

“Normally movies have the same people they use over and over for everything. It’s called typecasting. They don’t like to take chances. They’ll go with the guy they had before.”-Albert Brooks

“I made my living in comedy, but I’m not a silly person. I’ve got all these sides to me. Even in my movies that I’ve written myself, the characters sometimes border on great anger or nutsiness or other kinds of behavior. I’m not just doing fart jokes for two hours.”-Albert Brooks

“This getting old is something. I think I envy my dog, because my dog is sixteen, and she’s limping, and she’s still living, but she doesn’t look at me like she knows. She’s not thinking what I’m thinking. It’s a cruel trick that we all know the ending.”-Albert Brooks

“‘2001’ is a really interesting movie because it came out in 1968, and everybody thought that that was possible, and look how ridiculous that was. We don’t have ships like that, and you know, nobody in 1968 was going, ‘Oh, that’ll never happen!’ But of course, it never happened. We’re not even close to it.”-Albert Brooks

“I wrote this book, ‘2030,’ and I was careful in the book not to overdo the future because I don’t think it comes that fast.”-Albert Brooks

“My audience has lots of people between 20 and 35, but there are always a few 60-year-olds, and it makes me happier than if everyone was 22.”-Albert Brooks

“I never liked going to the ocean.”-Albert Brooks

“If your last name is Christ, don’t name your son Jesus.”-Albert Brooks

“I like acting. It’s how I started, and I sort of feel that if I don’t give it a little shot now, and I go back, then I’m pretty much done with it. I mean, at what age am I going to do it? Although, when you see Christopher Plummer and Max von Sydow doing it, I guess the answer is 80.”-Albert Brooks

“The people on this planet that are trying to live their life, that isn’t trying to destroy things, are in the 99.9-percent majority.”-Albert Brooks

“When I started out, I tried out all my stuff on national television. There were no comedy clubs, but even if there were, I don’t think I would have gone to them. I used to do stuff in the bathroom, and then I’d drive down to NBC and do it on ‘The Golddiggers’ with Dean Martin.”-Albert Brooks

“Wouldn’t it be great if cars came equipped with screens like that thing they have in Times Square that spells out the news? You could punch out your own instant messages: ‘Will the small red car with the ugly driver please stay a little further behind?'”-Albert Brooks

“My father was very sick around the time I was born. The doctors thought he wouldn’t live. He did recover, but I don’t remember him as very active. I do remember lots of schtick around the dinner table. Generally, he and my brothers and I were all laughing at the same thing my mother did not find funny, whatever that was.”-Albert Brooks

“I guess I was the class clown – with a name like Albert Einstein, you don’t hide in the back. I’d read the school bulletin to the class, and I’d add activities and make stuff up. It was good, a good 10 minutes every morning.”-Albert Brooks

“I did years of summer stock. I sort of only wanted to be an actor. And then at 19, I was funny, and I had some of these bits that I did for friends, and I immediately could get on television.”-Albert Brooks

“One thing about Los Angeles is it feels like it’s not new. It feels like it’s already been built, and it’s deteriorating, except for the places they’re trying to make nicer. But in general, you drive all through the city, and the city feels like it was new a long time ago.”-Albert Brooks

“In the course of my movies, the financing and the releasing were always the tough part. Because I loved the creative; I loved the writing. I loved the making of it. Because, I guess, I never had the giant blockbuster, I never got that sort of ease for the next one.”-Albert Brooks

“‘ Finding Nemo’ has spawned so many sorts of emotions over the years. I don’t even know that you could really understand exactly what parents and kids are seeing in it, but they can see a lot of different stuff.”-Albert Brooks

“I’m really fond of ‘Real Life’ because I think it anticipated a whole movement. And people forget, they talk about ‘Spinal Tap,’ but that wasn’t… this was a mockumentary a long time before that. It was one of the early, early sorts of mockumentaries.”-Albert Brooks

“Basically, I still have the privacy that all celebrities crave, except for those celebrities who feel that privacy reflects some kind of failure on their part.”-Albert Brooks

“I think I present a different side of a male character: a side that is not John Wayne-like, a side that is, in fact, destructible. To some people, that is refreshing, and to other people, especially if they don’t know me, it may be disturbing.”-Albert Brooks

“If you don’t succeed on your own ground, then there’s no reason to succeed. Unless, of course, you really want a boat. If you’re a person who feels that with a yacht, everything will be all right, then you should do whatever you have to and get the yacht.”-Albert Brooks

“My humor is traced with dark – I’ve got dark patches all over the place.”-Albert Brooks

“If I start a film of my own, then what I eliminate is acting in other people’s movies. Because once I start, and I go raise the money, it’s about two and a half or three years, and I can’t stop. I have people hired. I can’t say, ‘Ooh there’s a good part called ‘Drive’; I’ll see you in three months.'”-Albert Brooks

“I probably learned, being in ‘Taxi Driver’ before I made my first film, I would come to the set every day just to watch how that film came about. It’s like a graduate course: it’s terrific. You talk to the cinematographer during the breaks. You ask the electrician why they are doing this.”-Albert Brooks

“Even in my comedies, I don’t take anger as a joke. I think anger and laughter are very close to each other when you think about it. One of the things I like about a character: I always think it’s fascinating when a character can turn on a dime and go from one emotion to another. I like watching that.”-Albert Brooks

“I had done about 60 television shows, from ‘Ed Sullivan’ to ‘The Hollywood Palace,’ before I ever went to ‘Johnny Carson.’ At the time, that was the showcase for comics. And I couldn’t believe it.”-Albert Brooks