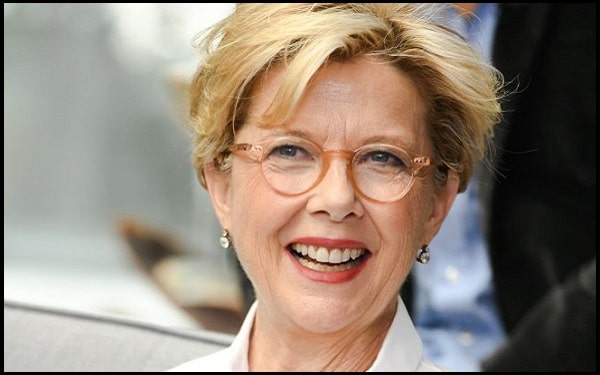 Annette Bening Quotes:- Annette Bening (born May 29, 1958) is an American actress. She began her career on stage with the Colorado Shakespeare Festival company in 1980 and played Lady Macbeth in 1984 at the American Conservatory Theater.

“I have perfected the art of putting my feet on my husband’s lap during awards ceremonies so he can rub them.”-Annette Bening 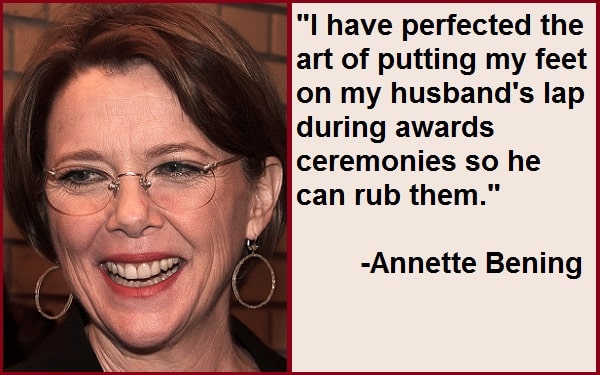 “Right now, I love the fact that I have so many opportunities, but I know this privileged position cannot last. That doesn’t mean that I’ll stop working. I picture myself as an old actress doing cameos in films with people saying: ‘Isn’t that that Bening woman?'”-Annette Bening

“Yes, I know I’ve played these women, but I’m not really conniving at all.”-Annette Bening

“My parents were very supportive. They went to every show. And they never told me not to do what I was doing.”-Annette Bening

“By the time I was in high school, Roe v. Wade had passed, so that was also happening; girls were getting pregnant and getting abortions – and that happened in my school too.”-Annette Bening

“If anything, I want to please people too much.”-Annette Bening

“The tension I feel is the moment they say, ‘Action!’ Movies are like lightning in a bottle, and you always want to find when you possibly can catch a surprising moment.”-Annette Bening

“I like things that I feel comfortable in.”-Annette Bening

“There’s no question that you can explore aspects of yourself through roles that you play, and you get a chance to investigate yourself; that’s healthy, and it’s therapeutic in a way. But if you’re indulging yourself, exploration at the cost of the story or the project, that’s not good.”-Annette Bening

“It’s hard to make a living in this business. Unions aren’t as strong as they used to be. For a journeyman actor – someone who doesn’t have a famous name but has consistent work in theater or film or TV – it has become harder to get through, harder to raise a family.”-Annette Bening

“Getting all dressed up and putting on fancy clothes – all of that’s a great thing, but oddly, it doesn’t really have a lot to do with acting most of the time.”-Annette Bening

“Anybody who has children and children who are well feeling a sense of responsibility towards parents and kids and families that are struggling and that aren’t well.”-Annette Bening

“Anyone who is drawn in broad strokes either negatively or positively is generally not very interesting to play.”-Annette Bening

“Critics have a responsibility to put things in a cultural and sociological or political context. That is important.”-Annette Bening

“Sometimes you’re reading something, and you don’t know it will be important in your life. You’re reading this script, and you start to get involved. It’s not an intellectual experience.”-Annette Bening

“Every person’s opinion, in a way, does matter.”-Annette Bening

“I feel very lucky I don’t have to be a critic.”-Annette Bening

“When I started, I was a theater actress, and there were roles that I couldn’t imagine not playing, like Rosalind in ‘As You Like It.’ I used to think I would die if I could play that. But then I started doing movies, and I had children, and I moved to Los Angeles. And now I kind of can’t remember what those roles would be.”-Annette Bening

“I have huge chunks of time when I’m not working.”-Annette Bening

“When I started in the theater, I’d do plays by Shakespeare or Ibsen or Chekhov, and they all created great women’s roles.”-Annette Bening

“I’ve made some movies that I really loved that nobody saw.”-Annette Bening

“I am in awe of Ruth Draper.”-Annette Bening

“I’m interested in writing that explores all sides of human beings.”-Annette Bening

“I find the reality of our emotional lives interesting.”-Annette Bening

“I like that I’ve been through things, that when something happens, it resonates with something that already happened. It’s not that things like loss are more or less painful. But they’re deeper. I find that fascinating.”-Annette Bening

“Our children see us a certain way, and we want to be seen by them in a certain way. I certainly want to be a strong, stable, loving, consistent presence in my children’s lives. But we are human beings, too.”-Annette Bening

“A lot of directors in my experience are very receptive. They see what you do first, and then they want to find a place to put the camera, and they tweak you here and there.”-Annette Bening

“Even with a stable character, you want something surprising to happen, hopefully, because that’s what the camera loves the most. That’s what is great about film.”-Annette Bening

“What really motivates you to try to work things out as an actor is in large part fear because you want to get into that narrative and bring the audience along.”-Annette Bening

“I’ve always been pretty levelheaded. In show business, you need to have a certain internal stability.”-Annette Bening

“My character in ‘Running With Scissors’ is manic-depressive. She starts out as a wonderfully eccentric person and then descends into a terrible illness.”-Annette Bening

“I think what’s interesting about the whole paparazzi thing is that unless you’re Brad Pitt or Madonna, you can pretty much avoid it. You know when you’re going to an opening that you will be photographed, so that’s fine. And you know the restaurants that have paparazzi, so you don’t go to them.”-Annette Bening

“If you’re an actor, you have to find a way to make peace with all the media attention.”-Annette Bening

“I’ve played parts that were just likable people, and there’s a certain pleasure in that. And that’s that.”-Annette Bening

“I don’t really have a choice. I’m getting older.”-Annette Bening

“To me, I didn’t think of acting as being a young thing only.”-Annette Bening

“Five billion people have played Hamlet. ‘To be or not to be.’ And how do you do that and find your way into your own journey, your own way of telling it?”-Annette Bening

“I love the luxury of the camera. The camera does so much for you. I like the secrets a camera can tell.”-Annette Bening

“I’m lucky: almost all my family has lived to be very old. I have one grandfather who lived to be 100.”-Annette Bening