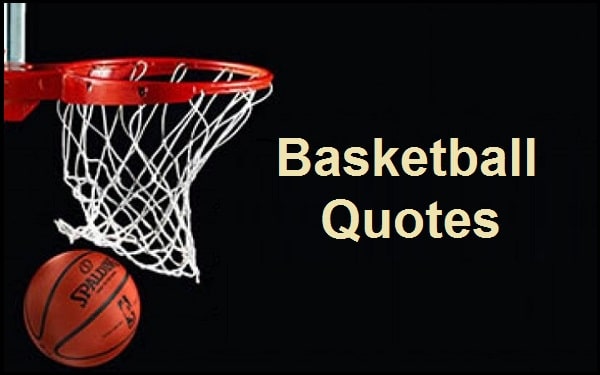 Basketball Quotes:- Basketball is a team sport in which two teams, most commonly of five players each, opposing one another on a rectangular court, compete with the primary objective of shooting a basketball (approximately 9.4 inches (24 cm) in diameter) through the defender’s hoop (a basket 18 inches (46 cm) in diameter mounted 10 feet (3.048 m) high to a backboard at each end of the court) while preventing the opposing team from shooting through their own hoop.

“There is no such thing as a perfect basketball player, and I don’t believe there is only one greatest player either.”-Michael Jordan 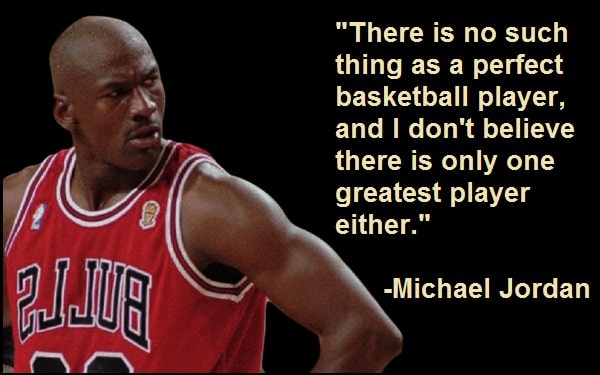 “I like low-maintenance girls, but at the same time, classy. She needs to take care of herself. But also be a girl who isn’t afraid to get sweaty and play basketball, so it’s cool if she’s a tomboy.”-Chris Brown

“I played college basketball. When I first decided I was going to play football, there were a lot of people telling me that I wasn’t going to make it.”-Jimmy Graham

“For a competitive junkie like me, golf is a great solution because it smacks you in the face every time you think you have accomplished something. That to me has taken over a lot of the energy and competitiveness for basketball.”-Michael Jordan

“When I was young, I had to learn the fundamentals of basketball. You can have all the physical ability in the world, but you still have to know the fundamentals.”-Michael Jordan

“I like sports, and I enjoy playing basketball and lifting weights.”-Joel Osteen

“We can have no progress without change, whether it be basketball or anything else.”-John Wooden

“So like any football or basketball coach, you always believe you’re going to win.”-Colin Powell

“February is always a bad month for TV sports. Football is gone, basketball is plodding along in the annual midseason doldrums, and baseball is not even mentioned.”-Hunter S. Thompson

“Everyone needs a coach. It doesn’t matter whether you’re a basketball player, a tennis player, a gymnast or a bridge player.”-Bill Gates

“I played a little basketball. Some football in junior high.”-Clint Eastwood

“You know, God gave me a gift to do other things besides play the game of basketball.”-LeBron James

“I don’t know how tall I am or how much I weigh. Because I don’t want anybody to know my identity. I’m like a superhero. Call me Basketball Man.”-LeBron James

“I treated it like every day was my last day with a basketball.”-LeBron James

“You know, I’m just 6’9″ and 260. And just so happen to be very good at playing the game of basketball.”-LeBron James

“Basketball is my passion, I love it. But my family and friends mean everything to me. That’s what’s important. I need my phone so I can keep in contact with them at all times.”-LeBron James

Great Basketball Quotes to Up Your Game

“I like playing basketball and going to the gym. I don’t box, but I’ll ride my bike and go jogging or running in the park. Sometimes my lady and I go hiking.”-Kevin Hart

“Trip Hawkins – and this was the early 1980s – was saying there’s going to be a day when everyone has a computer and they’re going to want to do more on it, including playing games. So he started up a company, EA Sports, and he was going to have three games, football, basketball, and baseball. So I was the football game.”-John Madden

“I’ve got five grandkids. They play baseball, they play football, they play basketball. I go to all the games. You always have that urge to say something when you’re watching them. But I’ve learned to keep it to myself. I’ve blurted out some things and embarrassed myself.”-John Madden

“If you’re a basketball player and you don’t stop and take pictures with your fans, you can have an amazing game and everyone still loves you.”-Kim Kardashian

“I want to say to you Indiana people that I owe you a big, big debt of gratitude because nowhere in the world is a sporting group followed more than this state follows basketball. And I just want to thank you for the opportunity that I had to coach in this state – it will always be something that I will cherish.”-Bobby Knight

“As I’ve said, basketball has been, I think, a real cooperative venture. There have been a lot of people that have been involved in it: coaches, administrators – not recently – fans and nobody, nobody any more so than students over the years.”-Bobby Knight

“Walking has been ridiculous in college basketball for the past 15 years.”-Bobby Knight

“I have always maintained that in basketball the importance of the mental to the physical is about four to one.”-Bobby Knight

“I’ve always felt that you know, the Almighty has a lot of things to do other than help my basketball team.”-Bobby Knight

“From my standpoint, I would make it very difficult for the NBA to even have any association with college basketball. I think it’s ludicrous the way they take kids away that are certainly not prepared to play.”-Bobby Knight

“I’ve got a basketball signed by all the greats from Julius Irving to Oscar Robinson. It was at an All-Star game I got them all to sign it. So that ain’t going nowhere. I’m going to die with that in my casket.”-Ice Cube

“I’m much more starstruck by athletes than I am by actors, and I think I saw Kobe Bryant at a basketball party, and I just kind of froze. He’s monstrous.”-Chris Evans

“A lot of times I blend in a little bit easier because I’m not like a basketball player who’s going to stand out because of his height.”-Tiger Woods

“To say someone is the greatest, I just don’t want championships to define that greatness. Because under that theory, Robert Horry is one of the five or six best basketball players ever – he has seven championship rings. We know that not to be true.”-Shannon Sharpe

“I’m just trying to be the best basketball player I can be, you know, move the ball.”-Giannis Antetokounmpo

“I want to be an all-around basketball player.”-Giannis Antetokounmpo

“That’s the style of basketball I love, playing on the open court.”-Giannis Antetokounmpo

“Leading your family is a lot tougher than basketball.”-Giannis Antetokounmpo

“I just stay home all the time. But the things I have learned outside of basketball is you got to take care of your body.”-Giannis Antetokounmpo

“I can’t take my mind off basketball.”-Giannis Antetokounmpo

“My dad was a soccer player. He didn’t know anything about basketball – nothing.”-Giannis Antetokounmpo

“The first time I played basketball was with my dad and my older brother Thanasis.”Giannis Antetokounmpo

“Basketball is one of those rare opportunities where you can make a difference, not only for yourself but for other people as well.”-Bill Walton

“Chick Hearn was my favorite broadcaster ever – he’s the one who taught me to think basketball, how to love basketball.”-Bill Walton

“My focus is basketball, and that’s it.”-Kyrie Irving

“Going in, you want to play a perfect season and play throughout the whole entire season, but injuries are a part of basketball.”-Kyrie Irving