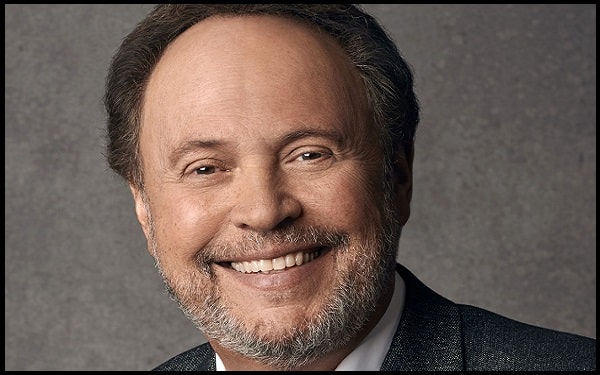 Billy Crystal Quotes:- Billy Crystal (born March 14, 1948) is an American actor, voice artist, comedian, singer, writer, producer, director, and television host. He gained prominence in the 1970s and 80s for television roles as Jodie Dallas on the ABC sitcom Soap and as a cast member and frequent host of Saturday Night Live.

“I was a film-directing major at NYU. I’m still not sure why I became a directing major when I was really an actor and a comedian, but there was something that drew me to do that.”-Billy Crystal 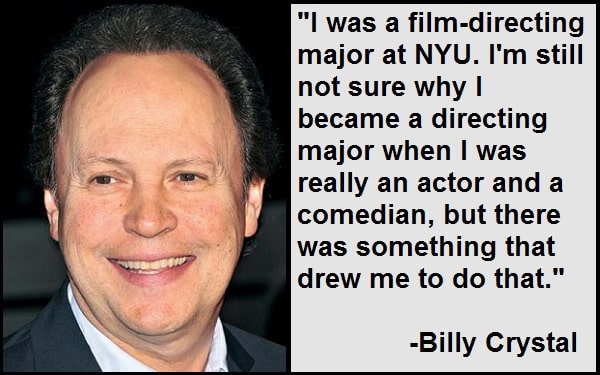 “What’s so fascinating and frustrating and great about life is that you’re constantly starting over, all the time, and I love that.”-Billy Crystal

“A laugh is a weird sound, and when you get a couple of thousand people making it at once, it’s really strange. But when I can feel proud of myself for causing it, it’s great.”-Billy Crystal

“I never worry that I’ll die in my sleep because I’m never asleep!”-Billy Crystal

“I’m a baby. I sleep like a baby – I’m up every two hours. And I think a lot. I worry a lot. I have great nights of no sleep where ideas come.”-Billy Crystal

“I’m going to go on just living and laughing and loving.”-Billy Crystal

“My mind is always going. I’m always thinking what I need to do, what I haven’t done, what I did do, what I didn’t do as well as I could – I’m relentless that way with myself.”-Billy Crystal

“In my standup work, I always do these characters, older people who are just off to the side. It’s easier to write a story about the guy who made it to the top, but the middle is so much more interesting, so much murkier.”-Billy Crystal

“My dad, Jack, had a great sense of humor and had a strong impact on me and my humor.”-Billy Crystal

“Muhammad Ali struck us in the middle of America’s darkest night, in the heart of its most threatening gathering storm. His power toppled the mightiest of foes, and his intense light shined on America, and we were able to see clearly an injustice, inequality, poverty, pride, self-realization, courage, laughter, love, joy and religious freedom for all.”-Billy Crystal

“Only once in a thousand years or so do we get to hear a Mozart or see a Picasso or read a Shakespeare. Ali was one of them, and yet at his heart, he was still a kid from Louisville who ran with the gods and walked with the crippled and smiled at the foolishness of it all.”-Billy Crystal

“Ali forced us to take a look at ourselves. This brash young man who thrilled us, angered us, confused and challenged us, ultimately became a silent messenger of peace who taught us that life is best when you build bridges between people, not walls.”-Billy Crystal

“Nothing takes the sting out of these tough economic times like watching a bunch of millionaires giving golden statues to each other.”-Billy Crystal

“My dad had two, sometimes three jobs. Besides running the Commodore Music Shop in Manhattan, he did jazz concerts, and he ran this great jazz label, Commodore.”-Billy Crystal

“I could always improvise. Some of my teachers remember me standing in front of the class with a flower on my head, talking about photosynthesis. I’d stop and say, ‘Is this working for any of you?’ The kids were like, ‘What is he doing?'”-Billy Crystal

“Your success is in your point of view. It’s your life that you’re talking about; it’s your observations. That’s the best lesson that I ever had.”-Billy Crystal

“Whatever it is that’s bothering me – interacting with an annoying guy at a restaurant, contemplating my age, or losing friends to illness – I’ll start to chip away at it. If you can poke holes in it, it’s not as formidable; it’s not as scary, and ultimately, it becomes another truth.”-Billy Crystal

“What life throws at you – you just have to learn how to hit it, which is a baseball metaphor. The ball’s outside, you hit to the right. You don’t let them go by.”-Billy Crystal

“I never stopped believing in us, and I never felt like I was wanting for anything, except for my father, and that was not going to be.”-Billy Crystal

“When I was growing up in the house, we’d watch the Oscars.”-Billy Crystal

“I think I’ve far exceeded what I ever thought I could possibly do.”-Billy Crystal

“I’m almost shocked that I’m still around after all of these years… and always grateful that I get another turn to do something.”-Billy Crystal

“I was always looking for something else to do most of the time until I got into the acting program. Then, I really found myself.”-Billy Crystal

“My Aunt Sheila was terrifying! She would put a napkin in her mouth and say, ‘You’ve got something on your face, dear. Let me just scratch that off your face. Let me sand your cheek.'”-Billy Crystal

“Our professor was Marty Scorsese. Marty was a graduate student, or Mr. Scorsese, which is what I had to call him, and still do when I see him ’cause he gave me a C.”-Billy Crystal

“I never missed a birthday. I never missed a school play. We carpooled. And the greatest compliment I can ever get is not about my career or performance or anything; it’s when people say, ‘You know, your girls are great.’ That’s the real thing for me.”-Billy Crystal

“To this day, with all of these muscle-bound guys, nobody hit the ball further than Mickey Mantle, with his natural strength.”-Billy Crystal

“My dad died when I was 15 and worked way too much.”-Billy Crystal

“I was raised mostly by my mom.”-Billy Crystal

“When I was about 21 and just about to get out of college at NYU, Vietnam was raging, and I was a frustrated musician for a little bit.”-Billy Crystal

“Since I got into the movies, ‘Running Scared,’ that did $40 million. ‘Princess Bride,’ I got good reviews for the character Miracle Max. ‘Memories of Me’ didn’t do well. ‘Throw Mama from the Train’ did $70 million. ‘Harry and Sally’ did 95 or 96. ‘City Slickers’ did $120 million.”-Billy Crystal

“Of course, my uncle was a giant, but my dad, in particular, had the house filled with these great Dixieland jazz stars, really the best of them: Henry Red Allen, Willie ‘The Lion’ Smith, Buster Bailey, Cutty Cutshall, Tyree Glenn, Zutty Singleton. These are all big names in the Dixieland world.”-Billy Crystal

“I’ve said, I never thought I rebelled. I never – I don’t think I’ve ever had that period. You know, I just had to do what I had to do. You know, I was a good kid.”-Billy Crystal

“Time scares me: having enough time to do all the things that I want to do in life, just even in terms of forgetting about the business I’m in.”-Billy Crystal

“There are all these things I want to accomplish. We never know how long we’re going to get.”-Billy Crystal

“There used to be that you only had four or five critics that you would look to for intelligent conversation, but now there are millions of people who can just press ‘send,’ and everyone’s got an opinion even if no one cares what they say. It makes things a little bit tougher.”-Billy Crystal

“I don’t go to any of the big Academy parties while the show is on because, invariably, it turns to people watching me watch the host, and it’s not comfortable. I watch at home and hope the show gets to be really good.”-Billy Crystal

“My parents always looked like they loved being together. That’s what I took from them, and that’s how my wife and I are. I still feel like we’re dating.”-Billy Crystal

“All that time, you go, ‘God, am I slipping away here?’ And then something great happens, you get a call, and work begets more work.”-Billy Crystal

“That’s the thing that I’m really most proud of: that I’m still… people still would like to see me. I love seeing them.”-Billy Crystal

“I’m proud that I have done so many different kinds of things and maintained an amazing family. And I think that’s the joy: that I’ve been able to have everything.”-Billy Crystal

“When you’re the host of the Academy Awards, and you grew up watching Bob Hope and Johnny Carson, and now it’s your turn, and you get a chance to run with the baton on the relay for a while, I really embraced it and just really loved being there.”-Billy Crystal

“I was a good baseball player. I still play a couple of times a week as part of my daily workout. Just throwing the ball, running around, fielding ground balls, you know. It’s better for me than being on a treadmill or some sort of Zumba class.”-Billy Crystal

“I have performed my one-man show ‘700 Sundays’ over 400 times now. There were only two times that I can honestly say I was nervous. The first was when I knew Mel Brooks was in the audience, and the second was when Sid Caesar came.”-Billy Crystal

“The death of Sid Caesar on Wednesday caused a chain reaction in my soon-to-be-66-year-old mind. I was saddened, of course, but felt a sense of relief that he was at last free from the indignity of aging.”-Billy Crystal