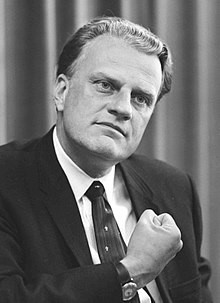 The son of a prosperous dairy farmer, Billy Graham grew up in rural North Carolina. In 1934, while attending a revival meeting led by the evangelist Mordecai Ham, he underwent a religious experience and professed his “decision for Christ.”

In 1936 he left his father’s dairy farm to attend Bob Jones College (now Bob Jones University), then located in Cleveland, Tennessee, but stayed for only a semester because of the extreme fundamentalism of the institution. He transferred to Florida Bible Institute (now Trinity College), near Tampa, graduated in 1940, and was ordained a minister by the Southern Baptist Convention.

Convinced that his education was deficient, however, Graham enrolled at Wheaton College in Illinois. While at Wheaton, he met and married (1943) Ruth Bell, daughter of L. Nelson Bell, a missionary to China.

By the time Graham graduated from Wheaton in 1943, he had developed the preaching style for which he would become famous—a simple, direct message of sin and salvation that he delivered energetically and without condescension.

“Sincerity,” he observed many years later, “is the biggest part of selling anything, including the Christian plan of salvation.” After a brief and undistinguished stint as pastor of Western Springs Baptist Church in the western suburbs of Chicago, Graham decided to become an itinerant evangelist. He joined the staff of a new organization called Youth for Christ in 1945 and in 1947 served as president of Northwestern Bible College in Minneapolis, Minnesota.

Additionally, Graham was recognized by the National Conference of Christians and Jews for promoting understanding between faiths and bestowed with the Honorary Knight Commander of the Order of the British Empire (KBE).

In 1992, Graham announced that he was diagnosed with hydrocephalus, a disease similar to Parkinson’s Disease. His son William Franklin Graham III was chosen to take over BGEA upon his father’s retirement. Billy and his wife Ruth eventually retired to their home in Montreat, North Carolina, in 2005. In 2007, Ruth Graham passed away from pneumonia and degenerative osteoarthritis.

She is remembered by her husband, five children, and 19 grandchildren. Graham turned 90 in 2008.   Graham claimed to have preached in person to more people than anyone else in history, an assertion that few would challenge.

His evangelical crusades around the world, his television appearances and radio broadcasts, his friendships with presidents, and his unofficial role as spokesman for America’s evangelicals made him one of the most recognized religious figures of the 20th century.

Graham briefly pastored the First Baptist Church in Western Springs, Illinois, before leaving to join Youth for Christ, an evangelical missionary group that spoke to returning servicemen and young people about God. In 1947, Billy Graham became president of Northwestern Schools, a group of Christian schools in Minnesota.

In 1948, he resigned from Youth for Christ and focused on Northwestern Schools until 1952, when he resigned to concentrate on preaching.  It did not take long for people to identify with Billy Graham’s charismatic and heartfelt gospel sermons. In 1949, a group called “Christ for Greater Los Angeles” invited Graham to preach at their L.A. revival.

When radio personality Stuart Hamblen had Graham on his radio show, word of the revival spread. The publicity filled Graham’s tents and extended the revival for an additional five weeks. At the urging of newspaper magnate William Randolph Hearst, papers around the nation covered Graham’s revival meetings closely.

Thus, Graham helped bind together a vulnerable nation through a religious revival. By glazing over the finer details of Christianity and focusing on more moderate doctrines, Graham made evangelism enticing, non-threatening, even easy—and the media made his messages accessible to the masses.

After a 1957 crusade in New York, some more fundamentalist Protestant Christians criticized Graham for his ecumenism, even calling him “Antichrist”.

Graham expressed inclusivist views, suggesting that people without explicit faith in Jesus can be saved. In a 1997 interview with Robert Schuller, Graham said

They may not know the name of Jesus but they know in their hearts that they need something they do not have, and they turn to the only light they have, and I think that they are saved and they are going to be with us in heaven.


Iain Murray, writing from a conservative Protestant standpoint, argues that “Graham’s concessions are sad words from one who once spoke on the basis of biblical certainties.”

Graham passed away at his home in Montreal, North Carolina, on February 21, 2018, at the age of 99. Although his health had been in decline in recent years, he reportedly died of natural causes.

Graham was frequently honored by surveys, including “Greatest Living American” and consistently ranked among the most admired persons in the United States and the world. He appeared most frequently on Gallup’s list of most admired people. On the day of his death, Graham had been on Gallup’s Top 10 “Most Admired Man” list 61 times and held the highest rank of any person since the list began in 1948.

In 1967, he was the first Protestant to receive an honorary degree from Belmont Abbey College, a Roman Catholic school.

In 1983, he was awarded the Presidential Medal of Freedom by US President Ronald Reagan.

Graham received the Big Brother of the Year Award for his work on behalf of children. He was cited by the George Washington CarverMemorial Institute for his contributions to race relations.

He received the Templeton Foundation Prize for Progress in Religion and the Sylvanus Thayer Award for his commitment to “Duty, Honor, Country”. The “Billy Graham Children’s Health Center” in Asheville is named after and funded by Graham.