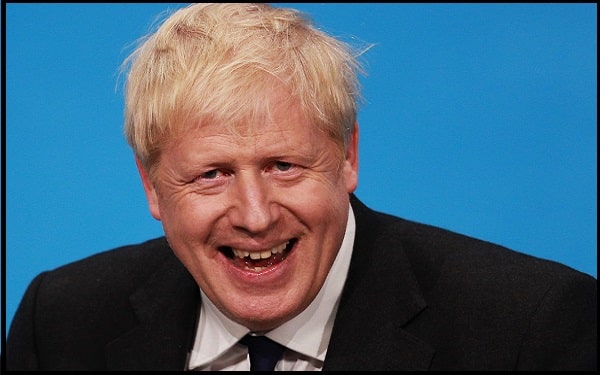 Boris Johnson Quotes:- Boris Johnson (born 19 June 1964) is a British politician, writer, and former journalist, who has served as Prime Minister of the United Kingdom and Leader of the Conservative Party since 2019.

“My friends, as I have discovered myself, there are no disasters, only opportunities. And, indeed, opportunities for fresh disasters.”-Boris Johnson 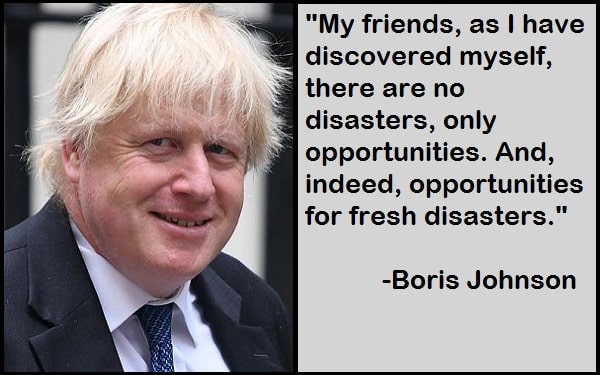 “That is the best case for Bush; that, among other things, he liberated Iraq. It is good enough for me.”-Boris Johnson

“I lead a life of blameless domesticity and always have done.”-Boris Johnson

“The job of mayor of London is unbelievably taxing, particularly in the run-up to the Olympics.”-Boris Johnson

“Some people play the piano, some do Sudoku, some watch television, some people go out to dinner parties. I write books.”-Boris Johnson

“It just happens I write fast and always have done.”-Boris Johnson

“If we judged everybody by the stupid, unguarded things they blurt out to their nearest and dearest, then we wouldn’t ever get anywhere.”-Boris Johnson

“So I’m definitely in favor of stimulating the dynamic wealth creation sectors of the economy.”-Boris Johnson

“I want London to be a competitive, dynamic place to come to work.”-Boris Johnson

“But if people want to swim in the Thames, if they want to take their lives into their own hands, then they should be able to do so with all the freedom and exhilaration of our woad-painted ancestors.”-Boris Johnson

“I love swimming in rivers, and well remember once jumping in at Chiswick.”-Boris Johnson

“I have not been more robust towards female rather than male assembly members and I do not believe I have been remotely sexist.”-Boris Johnson

“We are experiencing such large support for the Olympic relay that our advice is to stay in your neighbourhood, stay in your borough and wait for it to come near you.”-Boris Johnson

“What I worry about is that people are losing confidence, losing energy, losing enthusiasm, and there’s a real opportunity to get them into work.”-Boris Johnson

“London is a fantastic creator of jobs – but many of these jobs are going to people who don’t originate in this country.”-Boris Johnson

“Times have been tough, the economy has been tough. But I want to bring forward a fantastic manifesto for taking the city forwards.”-Boris Johnson

“My speaking style was criticised by no less an authority than Arnold Schwarzenegger. It was a low moment, my friends, to have my rhetorical skills denounced by a monosyllabic Austrian cyborg.”-Boris Johnson

“My policy on cake is pro having it and pro eating it.”-Boris Johnson

“I am supporting David Cameron purely out of cynical self-interest.”-Boris Johnson

“The Lib Dems are not just empty. They are a void within a vacuum surrounded by a vast inanition.”-Boris Johnson

“Ping-pong was invented on the dining tables of England in the 19th century, and it was called Wiff-waff! And there, I think, you have the difference between us and the rest of the world. Other nations, the French, looked at a dining table and saw an opportunity to have dinner; we looked at it an saw an opportunity to play Wiff-waff.”-Boris Johnson

“It is easy to make promises – it is hard work to keep them.”-Boris Johnson

“I think I’m basically a liberal Conservative – I believe in low tax, spirit of free enterprise, and in making sure that we as politicians create the framework for business to produce the dosh that we’re going to need to pay for the poorest. And the longer I live, the more I think that we all have a duty to each other.”-Boris Johnson

“I’ve always sort of thought that politics was a high and noble calling and a good thing to do.”-Boris Johnson

“I’m not particularly politically correct, so I tend to reflect what I think are the terrible realities of life, which I think are, generally speaking, conservative.”-Boris Johnson

“London is the most commercially important city in Europe, and it’s the most populous city. It should be for the whole of the European continent what New York is to America. That’s what it should be.”-Boris Johnson

“One thing you have got to do politically is to identify the ties that bind society together and try to strengthen them.”-Boris Johnson

“If you turn a blind eye to fare evasion, if you accustom people to getting away with minor crime, you are making it more likely that they will go on to commit more serious crimes. That is why we have so much disorder in London. It is a disgrace.”-Boris Johnson

“I’m made up of immigrant stock. I went to a primary school in London. I grew up eating Spangles, why shouldn’t I be as well placed to speak for Londoners as anyone else?”-Boris Johnson

“It is possible to have a pretty good life and career being a leech and a parasite in the media world, gadding about from TV studio to TV studio, writing inconsequential pieces and having a good time. But in the end you have a great sense of personal dissatisfaction.”-Boris Johnson

“I suppose with houses and assets, then I guess I would be a millionaire. But so are a lot of people.”-Boris Johnson

“What I really think about Banksy is I think he’s a genius; he’s a great artist, and I like his stuff. But he’s got to accept it if, from time to time, someone will need to paint over his work.”-Boris Johnson

“I’m not one of those people who believes in going endlessly around finger wagging and ticking people off for occasional colourful use of language.”-Boris Johnson

“There’s an idea that London is a planet on its own: that it’s starting to diverge from the rest of the solar system. We need to combat that.”-Boris Johnson

“Huge numbers of people in London depend on their cars. Fuel duty is becoming a big factor in people’s cost of living. I believe in trying to ease these burdens.”-Boris Johnson

“I believe in immigration. But I feel people think it would be better if there was an Australian-style points based system so we could actually get a good system.”-Boris Johnson

“If I’d been on the Remain side I would have tried to have seen the best in Europe and tried to explain that. Instead, what they’ve done is endlessly try and talk up what they see as the weaknesses of Britain and they aren’t there. That’s a total mistake.”-Boris Johnson

“The Remain campaign… I’ve never seen a more miserable offering. All they are saying is stay in and we’ll do our best to make sure that Britain’s Parliamentary independence isn’t eroded faster than we can possibly imagine.”-Boris Johnson

“I’ve done eight years as mayor of London. I enjoyed it hugely; it was a massive privilege.”-Boris Johnson

“I used to get very, very frustrated by people being told what to do by nanny in Brussels. And I remember once I rang the official who was actually responsible for banning the prawn-cocktail-flavoured crisp, which I think contained a dye called Arithrazine or something like that.”-Boris Johnson

“We cannot turn our backs on Europe. We are part of Europe.”-Boris Johnson

“My point was very simple, and it was that it is absolutely absurd for the United States of America to continue to urge us further down the line towards a federal superstate when the U.S. has not even signed up to the U.N. Convention on Human Rights.”-Boris Johnson