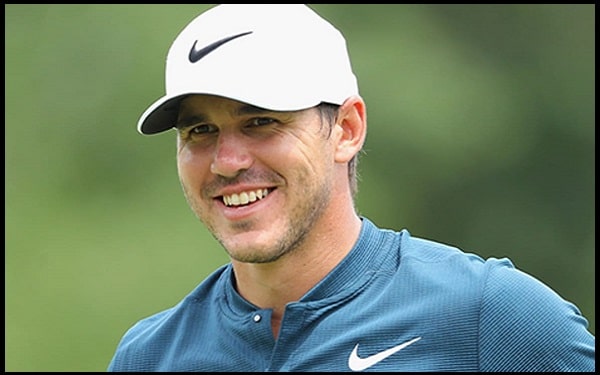 Brooks Koepka Quotes:- Brooks Koepka (born May 3, 1990) is an American professional golfer on the PGA Tour. In October 2018, he became World Number 1 in the Official World Golf Ranking after winning the 2018 CJ Cup.

“I’m usually out there grinding. You see a birdie goes up on the board, and you’re not thinking about how it affects the tournament because you’re playing.”-Brooks Koepka 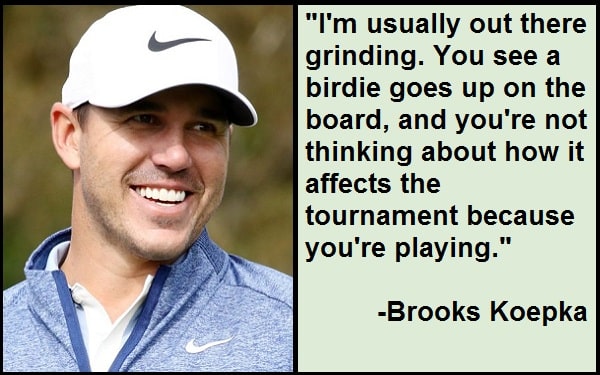 “I could have played in a lot of Monday qualifiers for PGA Tour events, which would have been fine as long as I was getting through. But Monday qualifiers can also be depressing if you are missing out time and again.”-Brooks Koepka

“At home, I’m definitely not watching golf. I’d rather be watching baseball, basketball, football, whatever it is.”-Brooks Koepka

“I think of three things, and that’s it. Just keep it short and take it outside and swing it left.”-Brooks Koepka

“It’s pretty obvious when Tiger makes a birdie. I think everybody on the golf course cheers for him.”-Brooks Koepka

“Anytime you can get some congratulatory – anything said or the guys waiting around the green – that’s always nice. You’re out here so many weeks a year, and some time away from your family, and the tour kind of becomes your family. So when you have these guys hanging around, it’s special.”-Brooks Koepka

“There’s something about majors where I just focus a lot more. Obviously, I need to do that more often.”-Brooks Koepka

“It’s taken me a long time to learn how to not try to win. I’ve been trying to win too badly. I feel like I’ve underachieved.”-Brooks Koepka

“I don’t feel like there is anybody out there with more confidence than me.”-Brooks Koepka

“The U.S. Open just takes so much discipline. You have got to be a great putter and just kind of let things roll off your back.”-Brooks Koepka

“I enjoy being pushed to the limit. Sometimes you feel like you are about to break mentally, but that’s what I enjoy.”-Brooks Koepka

“You always feel like you’ve got something to prove, whether it be to yourself or somebody else. I can think of plenty of people along the way telling me I’ll be nothing, working at McDonald’s, doing things like that. The whole time, you’re just trying to prove them wrong.”-Brooks Koepka

“There’s a different feeling when you show up and you’re defending. You can’t wait to get out there. You’re not anxious that Monday, Tuesday, Wednesday would be over, but you’re just excited to get that ball in the air on Thursday.”-Brooks Koepka

“Sitting on that couch eating and gaining 20 pounds isn’t exactly fun – there’s only so much you can do.”-Brooks Koepka

“You’ve got to be able to let things roll off your back, and you’ve got to have some patience.”-Brooks Koepka

“You’re always working to try and climb that ladder.”-Brooks Koepka

“I play fairly aggressively week to week and fire at a lot of pins. So I might miss more greens than other pros, but I’m still only a few yards from the hole when I do. That being said, when I really need to hit a green in regulation, I’m confident in my swing.”-Brooks Koepka

“A lot of golfers take the club back with almost no upper-body rotation – they’re all arms. And even when they do rotate back, it’s usually on a flat shoulder plane. If your shoulders turn back fairly level with the ground, it’s hard to swing down from inside the target line and hit an accurate shot.”-Brooks Koepka

“A question I get asked a lot in pro-ams is how I’m able to swing the club as hard as I do. Honestly, I’m not swinging that hard. I’m using about 75 percent of my maximum effort.”-Brooks Koepka

“I typically opt for a fade when I’m hitting into greens. It’s just an easier shot to control.”-Brooks Koepka

“I’m just really good at blending in. If you look at how I’ve grown up, I wasn’t the best, so hanging back comes more naturally.”-Brooks Koepka

“There are some things you have to accept come with being really good at something: more attention, more eyes on you, every move you make – whether good or bad, you have to answer. If that’s the price of where I want to get, it’ll be worth it.”-Brooks Koepka

“If you look at some of the strongest athletes in the world, they’re gymnasts. And they’re the most flexible. You can be very strong, very flexible, and still be able to move.”-Brooks Koepka

“I got into a car accident and couldn’t play baseball, hockey, and basketball. We stuck with golf for a little while, and it’s panned out. I think it was a blessing in disguise.”-Brooks Koepka

“Golf’s my job; it’s not my life. It’s something I’ve enjoyed, but I also like to get away from the golf course.”-Brooks Koepka

“As long as every tournament, every year, you’re getting better and better, that’s all that matters.”-Brooks Koepka

“What’s been good for the downtime is I got a dog. A little black lab. I’ve been training her, so she’s kept me occupied.”-Brooks Koepka

“Everyone remembers the winner; nobody remembers who finishes second. But quite a lot, I seem to be right around the hunt with nine holes to play.”-Brooks Koepka

“You start comparing yourself to other people, you end up trying to be that person. You’ve got to be your own person, do it your own way. You can be motivated by somebody, but you don’t have to take after them.”-Brooks Koepka

“To me, traveling in the United States isn’t that much fun. I like to go elsewhere and experience different cultures.”-Brooks Koepka

“I’m not going to let everyone in, but when I do open up, I trust you. I let you fully in. My close friends, my family, and everyone around me can really appreciate it, and sometimes it’s not the easiest to open up to people.”-Brooks Koepka

“I’m not always smiling when I’m on the golf course. Sometimes, hey, listen, people have regular jobs. You go to them when they’re working, and you catch them not in the best moment either. So I understand how people could perceive me. But come get to know me, and I’m totally a different person.”-Brooks Koepka