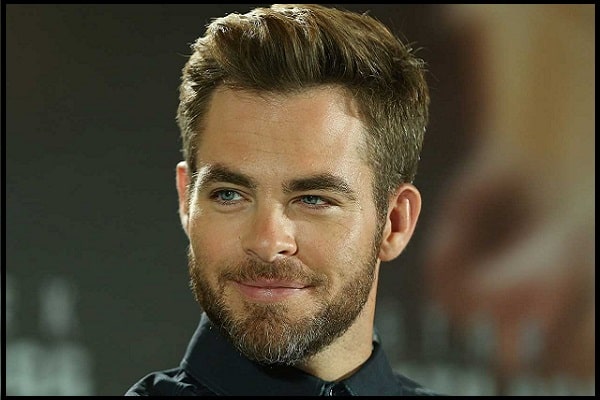 “I find the ritual of shaving very relaxing, but for every day, it’s pretty irritating on my skin, so I like having the definition a beard gives.”-Chris Pine 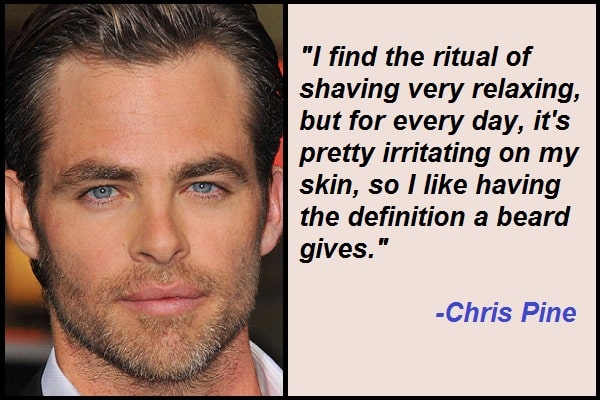 “Mediocrity scares me. It’s the fear of not being as good as you want to be. If you give over to that fear, it will sabotage you. As much as I can, I try to use that fear to guide me.”-Chris Pine

“There are going to be good times and bad times, but lighten up.”-Chris Pine

“Musical theater is great; you get painted up, you get to play princesses and witches, and you sing. The joy alone of that can really carry a lot.”-Chris Pine

“I like a deep sports massage – a casual beating up. I try to get them whenever I can, usually more if I’m getting in shape for a role.”-Chris Pine

“I still assume that any day, I’m going to be exposed as a fraud. That, like I once heard Gene Hackman say, the acting police are going to burst in and take away my card.”-Chris Pine

“My go-to line when it’s the resume game is that I’m either Chris Evans or Ryan Reynolds.”-Chris Pine

“The mythic journey is always about selflessness.”-Chris Pine

“After many years of self-flagellation, I’ve realized that beating myself up doesn’t get me anywhere.”-Chris Pine

“Me’ time is just as important as ‘us’ time.”-Chris Pine

“When you feel like an oddball, it never really leaves you. Even now, I’m better around people who are uncomfortable with themselves – the misfits.”-Chris Pine

“It’s really interesting that, in ‘The Avengers,’ the character that people relate to is The Hulk, and I think the reason why they relate to The Hulk is that he’s fragile and human and faulty.”-Chris Pine

“Dating someone on the opposite end of the happy spectrum teaches you an incredible amount of patience.”-Chris Pine

“As an actor, it easy to be so self-critical, saying to yourself, ‘Am I good enough? Am I good looking enough? Am I smart enough?”-Chris Pine

“From Drew Barrymore to Robert Downey Jr., there’s a long list of people who have faced their troubles, wildly overcome them, and succeeded.”-Chris Pine

“I don’t think there’s anything better than talk therapy.”-Chris Pine

“I talk to myself, especially in the car.”-Chris Pine

“I performed and sang at school but as a child, it was never anything I was interested in doing professionally.”-Chris Pine

“Generally speaking, the more money that’s involved in anything, the more people are expecting and hoping that it’s not going to fail.”-Chris Pine

“Women think that men don’t talk about their feelings with guys. We do talk to friends about relationships, but it’s succinct – 10 minutes, then we move on.”-Chris Pine

“I don’t know any kid that’s not afraid at some point going to bed with the lights off, totally. That’s why they make nightlights.”-Chris Pine

“I do like dating cynics – they tend to be incredibly funny.”-Chris Pine

“I’m more cerebral than I want to be.”-Chris Pine

“Work takes up a lot of my brain space. So when I work, it’s one thing. I don’t have a lot of time to think about dating.”-Chris Pine

“I’m always calculating what I want to do, who I want to be, what I want to accomplish. I don’t need to worry about that – that’s always there on a slow simmer. The muscle I have to work on is being more present.”-Chris Pine

“Star Trek’ scared me a lot more than ‘White Jazz.’ It terrified me, really. Because of the scale, the responsibility, the fact that it was this iconic character. It was a bigger challenge, so I had to take it.”-Chris Pine

“When you want something enough, it brings out primal emotions. You get into this place of ‘must happen, must happen.”-Chris Pine

“The great thing about theater is that you have so much time to prepare, and to fail, before presenting it to the public. In the film, the high-wire act seems to be that much farther up, and the net seems to be less there.”-Chris Pine

“I think the first thing that I saw on IMAX was ‘The Avengers.’ The scope and the size of it are pretty neat, I will say that.”-Chris Pine

“I find it really hard to even read another script while shooting.”-Chris Pine

“I would love to do more theatre, musicals… everything.”-Chris Pine

“Star Trek’ is about a bunch of disparate people and what they’re capable of when they work together.”-Chris Pine

“My fans have designated themselves the, uh, ‘Pine Nuts.’ They’re a nutty bunch.”-Chris Pine

“If I had let myself off the hook in college, I could have enjoyed myself a lot more. Knowing that I can’t have those years back, I have learned to get the most out of living in the now.”-Chris Pine

“Just lead your life and try to make the best decisions.”-Chris Pine

“Uh, I do not wear a wig in ‘Star Trek’ as I did in ‘Bottle Shock,’ thank God. ‘Bottle Shock’ will be the last wig movie I ever do.”-Chris Pine

“Any actor wants to do interesting roles, different roles. It’s not all that much fun to do the same thing over and over again.”-Chris Pine

“I do enjoy doing action quite clearly, but I also really like doing comedy.”-Chris Pine

“Everybody’s got family, or they don’t have family, but they come from somewhere.”-Chris Pine

“Anytime you take on a character… you just have to find the parts of the character that you can understand.”-Chris Pine

“No matter how bad the individual, everybody has reasons for why they do what they do.”-Chris Pine

“I love the spy genre.”-Chris Pine

“If you had no real training if you hadn’t spent years and years studying a martial art, how would you kill the bad guy?”-Chris Pine

“I like this idea of becoming fully realized.”-Chris Pine

“You see Justin Bieber and Robert Pattinson, what they go through, and dude, that’s not as exciting as it looks.”-Chris Pine

“You either listen to the naysayers and fall into the pit of self-loathing, or you stay on the path and move forward.”-Chris Pine

“I cry all the time – at work, at the shrink’s, with my lady. ‘The Notebook’ killed me. ‘Up’ destroyed me.”-Chris Pine

“Critics think we try to make bad films. They think we want to spend five months of our lives making something bad. We always go out with the best of intentions, whether it’s a fluffy comedy or a drama.”-Chris Pine

“On red carpets, as people throw questions at you, you try and answer as quickly as possible.”-Chris Pine

“I don’t usually read self-help books, but I read a great book by a guy called Wayne Dyer: ‘The Power of Intention,’ which I loved.”-Chris Pine

“There have been, like, three auditions in my life where I feel like I’m in a ‘Saturday Night Live’ skit.”-Chris Pine

“My name is not ‘William Shatner.”-Chris Pine

“I broke my finger in a stunt in a very not-too-romantic way. I was just trying to tackle someone, and I just flicked his forearm and then screamed in pain.”-Chris Pine

“I’m an actor, but I am an awful liar.”-Chris Pine

“More than anything, what we do as actors is to sit and watch, and I would never want to get so lost in the celebrity bubble I couldn’t do that because my feet no longer touch the ground.”-Chris Pine

“The first audition I went out on was because my father was on an audition for a TV show called the ‘Gilmore Girls,’ and that kind of snowballed a lot of stuff in my life.”-Chris Pine

“I wanted to become an actor because I wanted friends.”-Chris Pine

“What am I going to tweet about? My sneakers?”-Chris Pine

“I’ve sung in the shower for years.”-Chris Pine

“My father calls acting ‘a state of permanent retirement with short spurts of work.'”-Chris Pine

“I like to listen to French radio; I’m trying to learn French.”-Chris Pine

“The authentic experience, where is that? Living the moment. That is something that we’re losing.”-Chris Pine

“The customer is not always right.”-Chris Pine

“I’ve seen what can happen to an actor when he’s just working for the sake of working. All of a sudden it’s ten years later, your career’s happened, and you haven’t had any control.”-Chris Pine

“In high school, I once sang ‘Let’s Get It On’ and ‘Brown Sugar’ with a band that included my English teacher and my math teacher.”-Chris Pine

“There’s certainly the ego-based me that is very competitive.”-Chris Pine

“It’s so rare to get all of your muscles firing at once. That’s what I look for in any role.”-Chris Pine

“I’m sensitive, and I don’t ever want to make anyone feel uncomfortable.”-Chris Pine

“I have worked hard to get where I am.”-Chris Pine

“For me, work is one thing, and my life is another.”-Chris Pine

“Action films, unfortunately, don’t let you spend a lot of time sitting. So you don’t have much time to create something indelible or unique.”-Chris Pine

“My father has been an actor since 1964. Things were tight a lot of the time, financially. It wasn’t like a big romantic adventure.”-Chris Pine

“There’s something so naked about being on stage as a musician. I think about that even with standup comedy or something – like, ‘This is it, this is what I got.”-Chris Pine

“I clearly haven’t made a good enough impression on people. My go-to line when it’s the resume game is that I’m either Chris Evans or Ryan Reynolds.”-Chris Pine