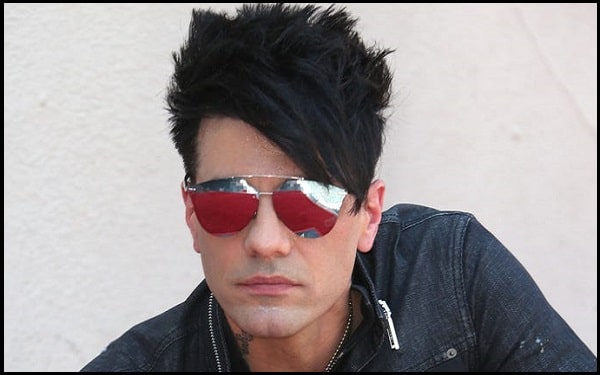 Criss Angel Quotes:- Criss Angel (born December 19, 1967) is an American magician, illusionist, and musician. Angel began his career in New York City, before moving his base of operations to the Las Vegas Valley.

“You can’t please everyone, and trying to is the kiss of death. I don’t care about Wayne Newton’s demographics. When I do, I’ll know that it’s time to quit.”-Criss Angel 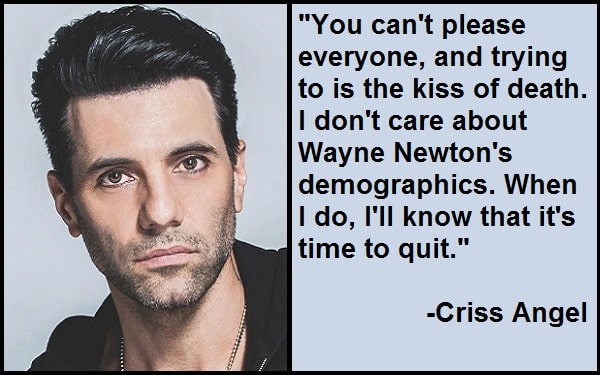 “Magic speaks to the child in all of us. No matter how sophisticated we become, there’s still a part of us who wants to believe in an alternative reality, where we can defy the laws of nature.”-Criss Angel

“One of my inspirations, Harry Houdini, remains an icon of the art because he defied our primal fears. His demonstrations in the early 20th century, especially his escape from the Chinese water torture cell, represented a triumph over suffocation, drowning, disorientation, and helplessness.”-Criss Angel

“Sometimes my art is just an illusion – or is it?”-Criss Angel

“We are thrilled to work with Fun and share the same sentiment that we want to do some really exciting and innovative things for the magic community.”-Criss Angel

“When my father died in my arms it had such a profound effect on me that at that very moment when my dad passed I realized that I needed to face my own fears.”-Criss Angel

“I’ve never, ever had any therapy. Some might say I need it, but I’ve never seen a shrink or a psychologist or anything like that.”-Criss Angel

“I came up with the term ‘Mindfreak’ because I didn’t like the word ‘magician.’ I felt like I wanted to coin a term that would be basically the reaction to my art. It would be a Mindfreak and so that’s why I came up with that. But, many people say I’m really a student of humanity and psychology.”-Criss Angel

“If people are fans of ‘Mindfreak,’ they are going to be so excited with ‘Belief.’ They are actually going to see those illusions that people think can only happen with trick photography.”-Criss Angel

“I love the press; I even like the people that don’t like me. If it wasn’t for those people, no one would know who I was and I wouldn’t have a gig.”-Criss Angel

“Picking locks or handcuffs for me is not really a big deal, I can do it pretty much in seconds, I’ve been doing since I was 14 years old. I used to sit on my bed as a kid with a pick set and you know just picking locks and stuff, so I’m used to it.”-Criss Angel

“And you know, I’m so used to going 100 miles an hour in every direction and sleeping you know, two, three hours a night, and that’s the way I live.”-Criss Angel

“Well to be perfectly frank with you I never created art or have done demonstrations for anyone before myself artistically. I always do it to try to push my own envelope to be the best I can be.”-Criss Angel

“Well, I have you know, several CD’s out; one of my best friends is Sully Erna from Godsmack – he is Godsmack, and we’re going to be working on an album together.”-Criss Angel

“To me, it’s never about the trick. I don’t care about how something works. I care about how people feel when they watch it. You know, that – that connection – that emotional connection is true magic.”-Criss Angel

“Well, I had immense respect for Cirque du Soleil when I first saw them in the ’80s on a television show and just thought, you know, this group is really reinventing the circus, as you know. Because there weren’t three rings. There were no animals.”-Criss Angel

“I want to ride my motorcycle up the side of the Luxor to the light and vanish.”-Criss Angel

“I think if you would have cut Houdini with a knife, blood wouldn’t come out, PR would.”-Criss Angel

“We weren’t poor growing up on Long Island, but it wasn’t lavish – just a regular middle-class house.”-Criss Angel

“I had an amazing childhood, lots of love. But my dad worked his tail off, getting up at 4 in the morning and going off at 5, 6 o’clock, yet he always had time to spend with his kids and his wife.”-Criss Angel

“I’m actually tougher on myself as I get older. It’s a vicious cycle. The things that are important in life are the things that you can’t buy in life: love, health, and happiness. I say that, and I believe that, and I try to live that.”-Criss Angel

“It’s so funny looking back, but my so-called overnight success actually took 15 years. I remember when I didn’t have any money, and my only car was mom’s Hyundai.”-Criss Angel

“You can just go to a magic shop or magic builder and buy what most magicians do, but that’s not what I’m about. With ‘Mindfreak’ on television and ‘Belief’ live, I want to bring things that people have never seen before. That process is very difficult. It’s very challenging, and you never know how long it’s going to take – months or years.”-Criss Angel

“I put my life in danger every time I do some of these demonstrations, whether it’s in the audience hanging upside down or on the stage. We now have a lot of dangerous stunts where anything can go wrong. In fact, I have fallen two stories and landed on the stage, so I am well aware of the dangers.”-Criss Angel

“I’ve been a live performer longer than I’ve been a television performer. For me, live is where it’s at.”-Criss Angel

“I am a very emotional person.”-Criss Angel

“I wish what I do was all real. Some of it’s real, some of it’s an illusion and I try to blur the line between both, but unfortunately, I’ve got to be honest with you. Taking a $1 bill and turning it into a $100 – unfortunately it’s not real.”-Criss Angel

“I wasn’t a smart kid and I still don’t think I’m too smart when it comes to book smart, but I was very good with what I knew and with my craft and I think that was my calling in life. But even today I never went to college.”-Criss Angel

“I think that the problem is that people fear so many things and they don’t live life to its fullest. And for me as an artist, if God should want me to come this Wednesday to the end of my life, so be it.”-Criss Angel

“I am a street performer as much as I am a stage performer. Yes, I have a television show, but every trick, every ‘Mindfreak’ you see, I can do live.”-Criss Angel

“The first time I thought about attempting a body suspension was after watching a documentary on rites-of-passage ceremonies from other cultures. I was completely intrigued by what these people put their bodies through.”-Criss Angel

“I’ve never formally trained for pain management, but I have a good understanding of how to conquer it. I just analyze the pain, feel it at the moment, and then mentally become numb to it.”-Criss Angel