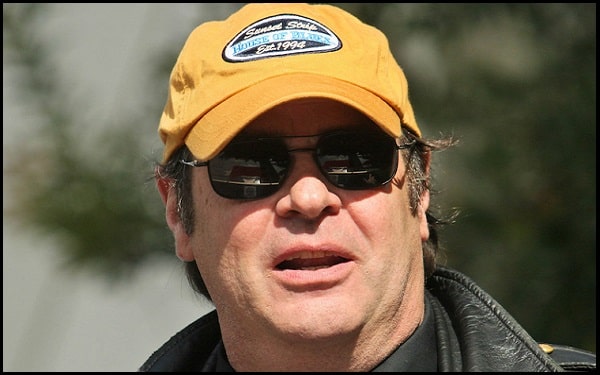 Dan Aykroyd Quotes:- Dan Aykroyd (born July 1, 1952) is a Canadian actor, producer, comedian, musician, and filmmaker who was an original member of the “Not Ready for Prime Time Players” on Saturday Night Live (1975–1979). 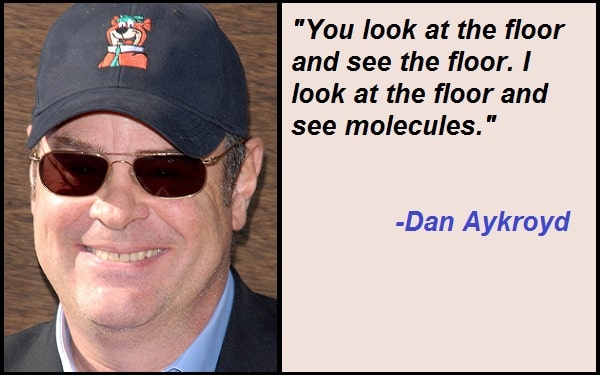 “Am I a trance medium? No. Have I got a gift psychically? Not. But I believe in the survival of consciousness after death.”-Dan Aykroyd

“I think I’m a narcoleptic. I could sleep on a railway track with a train running over me, in-between the rails.”-Dan Aykroyd

“You do not need a therapist if you own a motorcycle, any kind of motorcycle!”-Dan Aykroyd

“And, I believe that if a man dies with a single penny still sitting in the bank, he’s a fool.”-Dan Aykroyd

“I had a slight touch of Tourette’s, which means you talk to yourself and bark and cry out at night. I find myself talking to myself sometimes.”-Dan Aykroyd

“I’ve always been a big fan of science fiction and the worlds of the spiritual and the mystic.”-Dan Aykroyd

“I had a slight touch of Tourette’s, which means you talk to yourself and bark and cry out at night.”-Dan Aykroyd

“We have the most beautiful planet – the Rockies, the purple fields of the United States, the Lake District, the Pyrenees, the turquoise seas of the tropics.”-Dan Aykroyd

“I don’t need fame anymore. People are less interested in me in terms of celebrity. I’m happy to see a new generation being the media focus. I’m happy my day is done. It’s over.”-Dan Aykroyd

“Heaven to me is percussion and bass, a screaming guitar and a burbling Hammond B-3 organ. It’s a soup I love being immersed in.”-Dan Aykroyd

“I live in a high rise with my family part of the year in New York and I don’t know three-quarters of the people in the building. We live in the same square-footage and I wouldn’t know who they were.”-Dan Aykroyd

“I grew up on the edge of a national park in Canada – timberwolves, creeks, snowdrifts. I did have to walk home six miles through the snow, like your grandparents used to complain.”-Dan Aykroyd

“Hollywood is in love with any kind of nostalgia that can prove itself to be commercial.”-Dan Aykroyd

“I could live on challah bread, the Jewish kosher bread, quite happily.”-Dan Aykroyd

“Greetings and death to our enemies.”-Dan Aykroyd

“I love to come in and play with a wig or glasses or clothes. I love using props. I’m from the Peter Sellers school of trying to prepare for the character.”-Dan Aykroyd

“There are huge, massive mother ships going up to the Yukon. They’ve been filmed and are on video.”-Dan Aykroyd

“Well, the common enemy in North America is the Western consumer. The consumer has driven oil up to $50 a barrel so we have to have these wars. I think it’s incumbent upon us to.”-Dan Aykroyd

“I have this kind of mild nice-guy exterior, but inside my heart is like a steel trap.”-Dan Aykroyd

“The entertainment business is not the be-all and end-all for me.”-Dan Aykroyd

“My whole thing is to entertain, make people laugh and forget about the real world for a while.”-Dan Aykroyd

“The Right-wingers everywhere take themselves too seriously, whether in the U.S. or the U.K. And, by the way, so does the Left. The Left can take itself a little too seriously as well.”-Dan Aykroyd

“My great-grandfather, Sam Aykroyd, was a dentist in Kingston, Ontario, and he was also an Edwardian spiritualist researcher who was very interested in what was going on in the invisible world, the survival of the consciousness, precipitated paintings, mediumship, and trans-channeling.”-Dan Aykroyd

“Parodies of commercials are by no means new and have been popular going back to black-and-white TV shows of the ’50s.”-Dan Aykroyd

“I live in Canada in the summer and sometime in the fall.”-Dan Aykroyd

“Everyone fears the cut of the blade. It doesn’t matter after that. I know the spirit survives as there is so much evidence of the survival of the personality in the afterlife.”-Dan Aykroyd

“You know, I’ve sold a lot of bad movies in my time.”-Dan Aykroyd

“Folks have to pin me down because, for one thing, I don’t have a laptop. I don’t have an iPhone, and I refuse to carry them because they’re immensely hackable.”-Dan Aykroyd

“Certainly, the format of ghostbusting lends itself to a videogame beautifully.”-Dan Aykroyd

“There’s that old theory that humankind and this planet were seen as the center of the universe. That was thrown away – how could we be so presumptuous? Well, I subscribe to that.”-Dan Aykroyd

“Hygiene is important. That’s one of my failings. So I’m always being called on that.”-Dan Aykroyd

“Politics has got too personal, too nasty, in Britain, as it has in America.”-Dan Aykroyd

“When I’m not acting, I’m writing, building an inventory of scripts. Even if they sit on the shelf, I just keep stacking them up.”-Dan Aykroyd

“I grew up on the edge of a national park in Canada – timberwolves, creeks, snowdrifts.”-Dan Aykroyd

“I could sell used battery acid and make it fly.”-Dan Aykroyd

“American Society for Psychical Research Journals was all around the house when I was a kid.”-Dan Aykroyd

“I accept skeptics, you’ve got to have challenges.”-Dan Aykroyd

“Have I personally ever seen a ghost? Not one.”-Dan Aykroyd