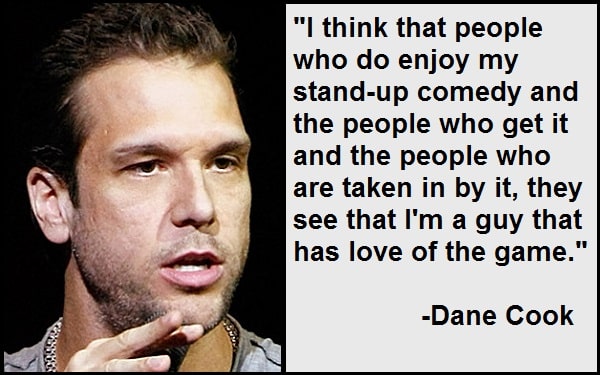 “That MySpace is the story of the year. Everyone but my mother is on it.”-Dane Cook

“My fam is just a regular family. But all of them have great senses of humor.”-Dane Cook

“I like fearless characters, people just not afraid to do anything it takes to make people laugh.”-Dane Cook

“When I first hit the scene, it was just a lot of go, go, go, go, go. I have a lot of natural energy anyway, but it was over the top.”-Dane Cook

“I had never done a roast, but I really wanted to, because it’s so different from standup.”-Dane Cook

“You have to learn the crowd. I just pay attention to them so I can make sure I can make them laugh.”-Dane Cook

“Vince Vaughn is a genuine person, an awesome guy. He’ll come to a lot of my shows. It’s not that often that you can meet someone as cool as Vince.”-Dane Cook

“No one wants to drown. Drowning would be the worst. Cause everyone knows that feeling. That feeling, oh it’s the worst… when you think you’re drowning.”-Dane Cook

“I feel like I was born and bred to stay self-motivated. I’m not one of those people who ho-hum and feels sorry for himself when something’s bad.”-Dane Cook

“I was doing comedy in laundry mats in 1992, literally where I would bring a little gorilla amp and a lapel mike and just start performing.”-Dane Cook

“When you are doing stand-up comedy, you are the writer, producer, director, sometimes bouncer.”-Dane Cook

“I’m glad that my parents missed one thing that was really unbelievable. They saw me hit this great success. It was a blast and we had a lot of laughs. And it was just an amazing time. They passed away. And then after I got, you know, famous, all these haters came out of nowhere.”-Dane Cook

“When you’re on a movie set and you are hopefully making a comedy, everyone’s stifling their laughter. You’re looking at the crew guys, hoping someone is making that face like, and not like, this is not working out, man.”-Dane Cook

“I say it with my tongue firmly planted in cheek but there’s truth to it – being a comedian is very close to being a therapist. When you’re working smaller clubs, you’re listening. You’re feeling energetic, you’re going with a tone but when people start yelling out, you almost start a conversation with people.”-Dane Cook

“I don’t have to do anything for anyone else’s benefit anymore. I just want to exceed my own expectations.”-Dane Cook

“The little boy inside of all us men always loves something video game-related.”-Dane Cook

“I can do more than just stand-up comedy, and the only way I’ll be able to show that is if I do it myself. Because nobody trusts that I can do it.”-Dane Cook

“I’m interested in doing everything and anything that I can to squeeze that creativity out of my brain. I guess I’m sort of a performance rat.”-Dane Cook

“I love being on stage if I’m not on a set. If I’m at home, I’m usually in my office editing or reconstructing my website or whatever it may be. I just love putting creativity into a performance, so if the right script comes along, and I certainly am reading comedies and dramas now, then I’m ready willing and able to give it a shot.”-Dane Cook

“My mom and dad passed away from cancer. Within nine months, I lost both of my folks. Immediately after that, I had a horrible betrayal where my brother, who worked for me, stole a lot of my money. He’s in jail now.”-Dane Cook

“As a comedian, I am obligated to tell you the truth, my truth. To share with you my beliefs, my perspective. And I think that we forget sometimes that that’s the oath that comics take, that we will go up and share everything – the irreverent, the scary.”-Dane Cook

“If haters or whatever want to find you – I mean, some of them are so tenacious. You want to hire them to work for you. They’re very, very savvy in terms of how they find you and get to you.”-Dane Cook

“I don’t know if I could rebuild an airplane engine, but I know a little bit about rotors and rivets.”-Dane Cook

“I was not a silly kid or outgoing. In fact, I suffered from quite a bit of anxiety. I used to have panic attacks when I was a teenager, really incapacitating moments because I had some phobias.”-Dane Cook

“My mother had a lot of phobias. She’s pregnant with me and she was a very phobic person. So I was born into a phobia, basically.”-Dane Cook

“I had humble beginnings. I was doing comedy in laundry mats in 1992, literally where I would bring a little gorilla amp and a lapel mike and just start performing.”-Dane Cook

“When I’m looking for hot button answers to tough questions, I don’t look to a congressman or my mayor. I say, ‘What would Miss U.S.A. have to say about this?'”-Dane Cook