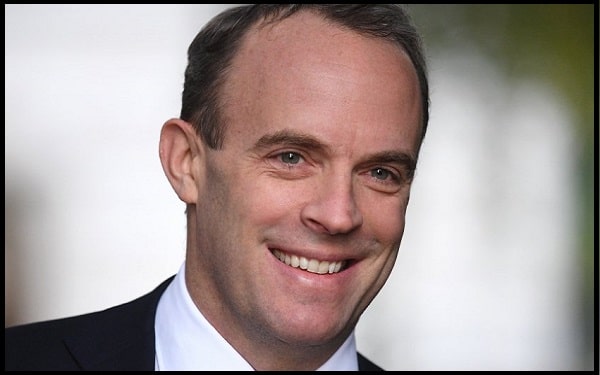 “British intervention in Iraq and Afghanistan swelled the grievances home-grown fanatics fed off, while al Qaeda morphed and re-grouped in lawless sanctuaries from Somalia to Yemen.”-Dominic Raab 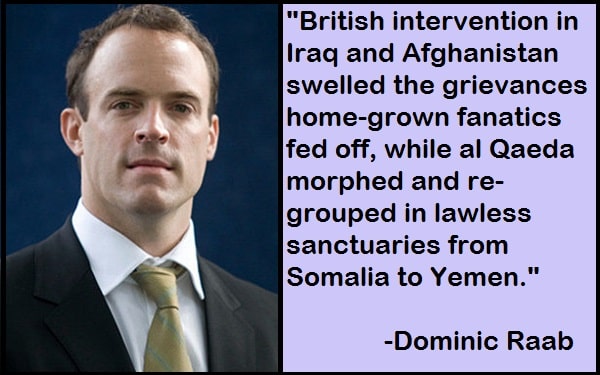 “Working as a Foreign Office lawyer in 2003, I was less worried by the quibbling over U.N. resolutions on Iraq than the coalition’s capacity to effect positive change.”-Dominic Raab

“For all its pro-democracy rhetoric, the West rolled over to military coups in Egypt and Thailand.”-Dominic Raab

“The government rightly resisted pressure to accept Free Movement of people from E.U. countries, to allow us to regain control over our immigration policy.”-Dominic Raab

‘As for the dream of a global Britain trading more energetically from Asia to Latin America, the E.U. has tied our hands, hobbling those ambitions.”-Dominic Raab

“No-one wants to see a return to the hard border between Northern Ireland and Ireland.”-Dominic Raab

“Of course, the E.U. were never going to welcome Brexit. Some sour grapes were inevitable. That’s why we worked hard to leave on positive terms, extending the arm of friendship.”-Dominic Raab

“The Government should be held accountable if it puts soldiers at unnecessary risk, which is why it is vital to retain full transparency in inquests. Governments also have a moral obligation to ensure proper care for the injured and their families.”-Dominic Raab

“State educators have confused the length of formal education with real-life skills.”-Dominic Raab

“The something-for-nothing culture has been championed by a minority of militant union leaders, who threaten strikes with impunity to secure unjustifiable pay hikes.”-Dominic Raab

“You can’t help your background or innate talents. But anyone can graft: that’s why there are success stories like that of Tony Pidgley, the founder and owner of Berkeley Homes.”-Dominic Raab

“Prisoners have benefited disproportionately from ‘rights inflation’ – the expansion of human rights into unforeseen nooks and crannies.”-Dominic Raab

“Despite egregious human rights abuses, military dictatorship in Greece, and Russian atrocities in Chechnya, no state has ever been voted out of the Council of Europe.”-Dominic Raab

“When Britain signed up to the European Convention and its later protocols, the words ‘universal suffrage’ were deleted from the ‘right to vote’ article.”-Dominic Raab

“Ingenious prisoners have successfully claimed a range of novel entitlements, from fertility treatment to a right to keep twigs in their cells to wave as wands in pagan rituals.”-Dominic Raab

“Far from protecting children, the abuse of Article 8 risks making them pawns – subject to coercion or worse – as part of a criminal’s desperate struggle to stay in Britain.”-Dominic Raab

“We have seen too many arbitrary Strasbourg diktats based on the whims of European judges – from prisoner voting to blocking deportation of Abu Qatada – rather than a sober reading of the sensible list of core freedoms in the European Convention itself.”-Dominic Raab

“Courts should interpret the law but leave elected lawmakers to create it.”-Dominic Raab

“No other country ties its hands in deporting foreign criminals as Britain does.”-Dominic Raab

“Control orders put people not convicted of any crime under virtual house arrest based on scant evidence. Billed as a security backstop, they proved unreliable.”-Dominic Raab

“Sacrificing British liberties will not protect us. It just plays into the hands of the terrorists. The justice system is not the problem. It is part of the solution. We can fight terror – and defend freedom.”-Dominic Raab

“We should protect free speech by repealing offences that stifle legitimate debate – like ‘glorification’ of terrorism and religious hatred – but take a ‘zero-tolerance’ approach to extremists inciting violence.”-Dominic Raab

“Introducing a voting threshold for strike action would save the country billions, unleashing productivity gains from rail infrastructure to administration.”-Dominic Raab

“Britain rightly sees herself as a global good citizen, but she must reconcile ambition with power, ends with means – shedding utopian idealism in favour of a more rugged internationalism, putting the national interest first, not last.”-Dominic Raab

“Shrouded by the ‘dodgy dossier,’ which warped opaque intelligence, none of the stated war aims in Iraq spoke to the British national interest. Illusory dreams of bringing Western-style democracy to the Middle East were punctured by failures of planning and strategy, as catalogued before the Chilcot Inquiry.”-Dominic Raab

“Personally, I would prefer Britain to remain within a more flexible E.U., with access to the single market but without the excessive regulation or constant efforts to direct social, justice, or foreign policy. But if that’s not possible, I believe this country could – and should – thrive outside the E.U.”-Dominic Raab

“Whether we are in or out of the E.U., we must deliver reform at home in order to compete abroad in the 21st century.”-Dominic Raab

“One reason women are left ‘holding the baby’ is anti-male discrimination in rights of maternity/paternity leave.”-Dominic Raab

“I’ll keep fighting for the best, most successful Brexit.”-Dominic Raab

“From the cradle to the grave, men are getting a raw deal. Men work longer hours, die earlier, but retire later than women.”-Dominic Raab