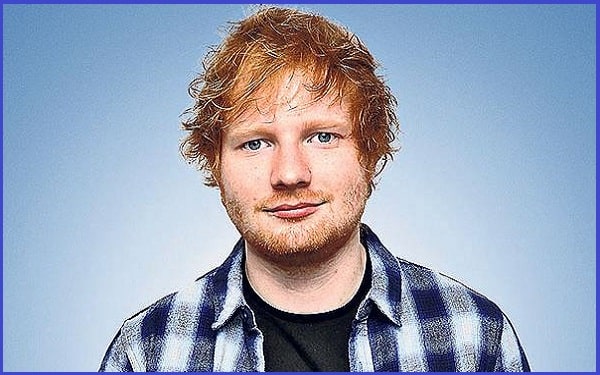 After signing with Asylum Records, his debut album, + (pronounced “plus”), was released in September 2011. It topped the UK and Australian charts, reached number five in the US, and has since been certified eight-times platinum in the UK.

“Music is a powerful tool in galvanizing people around an issue. There’s no better way to get your point across than to put it in a beautiful song.”-Ed Sheeran 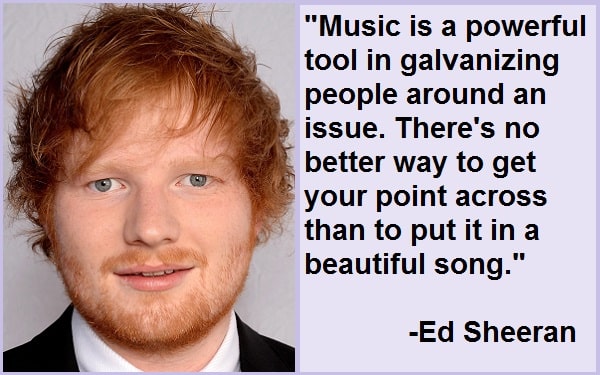 “The main thing that you have to remember on this journey is, just be nice to everyone and always smile.”-Ed Sheeran

“Try to find someone with a sense of humor. That’s an important thing to have because when you get into an argument, one of the best ways to diffuse it is to be funny. You don’t want to hide away from a point, because some points are serious, but you’d rather have a discussion that was a discussion, rather than an argument.”-Ed Sheeran

“It was my love for the guitar that first got me into music and singing.”-Ed Sheeran

“I don’t really do that whole ‘single life’ thing. I’m kind of heads down and get things done.”-Ed Sheeran

“I’ve had years of teasing about my red hair, but I definitely think it toughened me up. If you’re ginger, you end up pretty quick-witted.”-Ed Sheeran

“Some of my tattoos are a bit silly, but I know where and what time I got them.”-Ed Sheeran

“I’ve never really been a confident person, except a musical standpoint. I had to push myself early on, but it got easier with each gig.”-Ed Sheeran

“Instead of writing songs for girls, I tend to write albums, which I guess is a bit weird.”-Ed Sheeran

“If I can put on my album in a car or on my headphones and listen to the whole thing and love it, that’s what I’m going to be happy putting out there.”-Ed Sheeran

“In my eyes, there’s no one better than Stevie Wonder. He’s a top dude.”-Ed Sheeran

“As far as songwriting, my inspirations came from love, life and death, and viewing other people’s situations.”-Ed Sheeran

“I think the moment you start trying to please a fan base is when you start going downhill. I’m going to always, always write about what I want, even if it doesn’t necessarily cater to most of them.”-Ed Sheeran

“I’m quite arty. I didn’t know whether to become an artist or musician but I realized I could paint with music. All my songs have colors.”-Ed Sheeran

“I’d like to have kids and a wife, and you know, drop them off at school and like, do normal things rather than constantly being on tour. Because I’m young now and I haven’t really got a social life. This is all I do. It’s the best job in the world, but I’ll get to the point where there’s more to life than work.”-Ed Sheeran

“I want to have a career that evolves as I go on.”-Ed Sheeran

“I think YouTube has destroyed the genre barrier. People can be into Justin Bieber and Eminem at the same time. It’s a good thing.”-Ed Sheeran

“I would love to get a Moonman! I’d put it next to my other awards. I don’t have a cabinet right now; they’re just kind of all-around my flat, one next to the TV, one in the bedroom. So, I’d have to build a cabinet.”-Ed Sheeran

“Nashville is wicked. It’s like a proper music community, but it’s also quintessentially American. You bump into people there with cowboy hats that spit in jars and call you ‘boy.’ I just love that.”-Ed Sheeran

“It was my love for the guitar that first got me into music and singing. Growing up, I was inspired by The Beatles and Bob Dylan. Damian Rice was a huge influence for me musically.”-Ed Sheeran

“Growing up, I was inspired by The Beatles and Bob Dylan. Damian Rice was a huge influence for me musically.”-Ed Sheeran

“I do like my hair. It took a while to come around to the fact that it was quite a unique value point.”-Ed Sheeran

“I think I need to accept the fact that I am where I am today because fans have shared my music illegally and legally, but I wouldn’t be here today without the Internet, so I can’t speak out against it.”-Ed Sheeran

“I’ve done some really weird gigs. The ones where no one turned up – they’re probably not the interesting ones to talk about. I played some pretty random ones in L.A. I signed to play all-R&B nights or an all-comedy night where I’d be the only white person there. They were fun.”-Ed Sheeran

“I personally don’t think ginger men have a habit of being attractive. We have to make ourselves seem attractive by doing stuff.”-Ed Sheeran

“Whenever you have an ex, and they’re like, ‘I hope we can still be friends!’ and you weren’t friends before you started dating, then what do you go back to, really?”-Ed Sheeran

“I’m a huge hip-hop fan from way back in the day.”-Ed Sheeran

“Country music is some of the best-written music in the world, so yeah, one day, I would keep my mind open to doing a country record.”-Ed Sheeran

“I saw Damien Rice in Dublin when I was 13, and that inspired me to want to pursue being a songwriter… I practiced relentlessly and started recording my own EPs. At 16, I moved to London and played any gigs I could, selling CDs from my rucksack to fund recording the next, and it snowballed from there.”-Ed Sheeran

“I’ve never dated anyone in Hollywood – or anyone famous, for that matter. I don’t know that I’m ever gonna write a song that you will know who it’s about.”-Ed Sheeran

“The whole ‘studly womanizer’ thing, I mean, I quite enjoy the title – it’s just not very accurate.”-Ed Sheeran

“There were a couple of things I needed to do while I was in New York. One was to have a pizza pie, one was to get a tattoo… and the other was to get a Yankees hat.”-Ed Sheeran

“I’d like to say that I’m a rock star, but I’m not – I’m honestly more of a relationship kind of guy. I’m a guy you could take home to meet your mum rather than a guy your mum wouldn’t like.”-Ed Sheeran

“If Adele’s seen as boring, then I’m happy to be boring as well.”-Ed Sheeran

“I was on some TV shows with Lady Gaga the other week, and you could see the difference in reaction between her fans and my fans outside. She comes out, and she looks like a star, and the reaction is just to tear, crying, people going, ‘Oh my God, Oh my God.’ My fans are like: ‘Alright, Ed.'”-Ed Sheeran

“I get tweets every single day going, like, ‘I’m so glad you weren’t on ‘The X Factor.'”-Ed Sheeran

“Everyone knows almost everything about me. I make it very clear that I’m cool with people knowing all my personal life through my songs.”-Ed Sheeran

“You can’t call me a Twitter phenomenon or a YouTube one. These things are useful, but so’s hard gigging. One year I did 311 shows. I did six in one night alone.”-Ed Sheeran

“My love songs are very personal and quite weird. They don’t really have the big radio hit choruses because basically they’re my therapy, stuff I have to get off my chest.”-Ed Sheeran

“I think encouraging young people to twerk might be a bad thing. It’s a stripper’s move. If I had a daughter of nine, I wouldn’t want her twerking.”-Ed Sheeran

“I find the whole concept of women screaming at me so odd. It’s very flattering, but I don’t think I will ever consider myself to be a sex symbol.”-Ed Sheeran

“The best thing about being on the road, in general, is just playing every single night in front of people that are genuinely fans of your music.”-Ed Sheeran

“My parents worked in the art world. They were really supportive of my music in that they allowed me to drop out of school and move out of our home, which not many parents would do.”-Ed Sheeran

“I think I’ve been around for a while. But I still have to pay my dues.”-Ed Sheeran

“I don’t know if my songs fit in films.”-Ed Sheeran

“The thing that I took away as an early fan from Bob Dylan was the storytelling aspect. He can tell some wicked stories.”-Ed Sheeran

Famous Motivational Hang In There Quotes And Sayings

Motivational Upside Down Quotes and Sayings