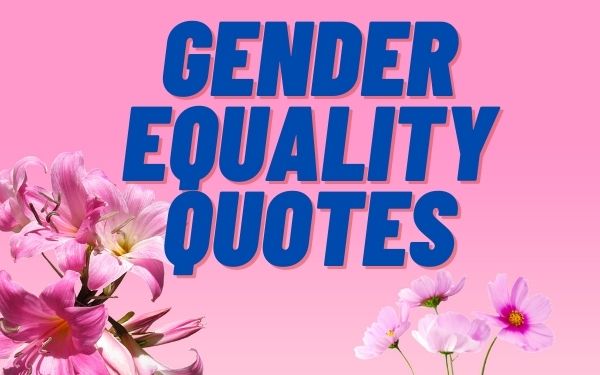 “Gender equality is critical to the development and peace of every nation.” 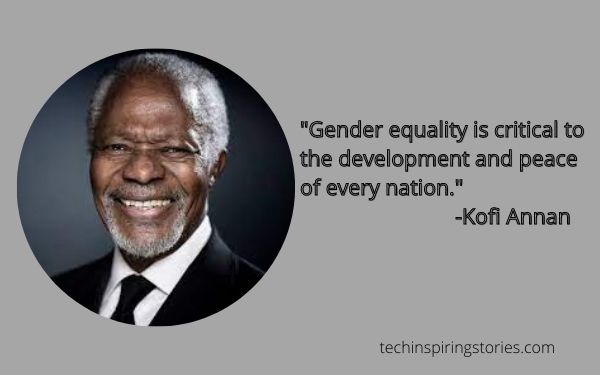 “Gender equality is more than a goal in itself. It is a precondition for meeting the challenge of reducing poverty, promoting sustainable development, and building good governance.”

“It is time that we all see gender as a spectrum instead of two sets of opposing ideals.”

“…gender relationships, which are tough for people to deal with, are key to whether a society orients to domination or partnership in all its relations.”

“The only way to solve the problem of women’s subordination is to change people’s mindset and to plant the new idea of gender equality into every mind.”

“No country in the world can yet say they have achieved gender equality.”

“Gender equality will only be reached if we are able to empower women.”

“Gender equality is a precondition to overcoming starvation, poverty, and epidemics.”

“What happened on the road to gender equality? A lot of work happened.”

“Once made equal to a man, a woman becomes his superior.”

“Women who seek to be equal with men lack ambition.”

“If women are expected to do the same work as men, we must teach them the same things.”

“A woman who thinks she is intelligent demands the same rights as a man. An intelligent woman gives up.”

“Any serious shift towards more sustainable societies has to include gender equality.”

“How important it is for us to recognize and celebrate our heroes and she-roes!”

“I don’t see gender as the most significant fact of human existence.”

“I would gladly admit women are superior to men if only they would stop trying to be the same as us.”

“Women want to be treated as equals, not sequels!”

“A feminist is anyone who recognizes the equality and full humanity of women and men.”

“The worst form of inequality is to try to make unequal things equal.”

“A man of quality is never threatened by a woman of equality.”

“And finally, in our time a beard is the one thing that a woman cannot do better than a man, or if she can her success is assured only in a circus.”

“It may be a man’s world, but men are easily controlled by women.”

“Man will never understand woman and vice versa. We are oil and water. An equal level can never be maintained, as one will always excel where the other doesn’t, and that breeds resentment.”

“I know of no industrial society where women are the economic equals of men. Of everything that economics measures, women get less.”