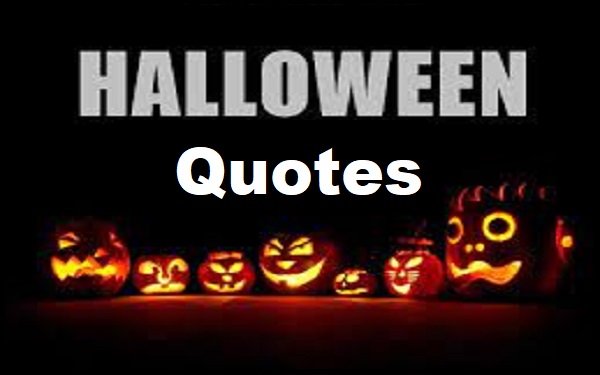 Below you will find our collection of inspirational, wise, and humorous old Halloween quotes, Halloween sayings, and Halloween proverbs, collected over the years from a variety of sources.

“Bring forth the raisins and the nuts- Tonight All-Hallows’ Spectre struts. Along the moonlit way.”

“Halloween wraps fear in innocence, as though it were a slightly sour sweet. Let terror, then, be turned into a treat…”

“As spirits roam the neighborhoods at night, let loose upon the Earth till it is light…”

“I don’t know that there are real ghosts and goblins, but there are always more trick-or-treaters than neighborhood kids.”

“This the night—the night of the grave’s delight and the warlocks are at their play; Ye think that without, The wild winds shout, but no, it is they—it is they!”

“On Halloween, witches come true; Wild ghosts escape from dreams. Each monster dances in the park.”

“Harvest Moon glows round and bold, in pumpkin shades outlined in gold, illuminating eerie forms, unnatural as candied corn. Beware what dare crawls up your sleeve, for is the night called Hallows Eve.”

“At first cock-crow the ghosts must go back to their quiet graves below.”

“From ghoulies and ghosties and long-legged beasties and things that go bump in the night, Good Lord, deliver us!”

“There is nothing funny about Halloween. This sarcastic festival reflects, rather, an infernal demand for revenge by children on the adult world.”

“This is now the very witching time of night When churchyards yawn and hell itself breathes out contagion to this world.”

“Halloween wraps fear in innocence, As though it were a slightly sour sweet. Let terror, then, be turned into a treat.”

“If human beings had genuine courage, they’d wear their costumes every day of the year, not just on Halloween.”

“A grandmother pretends she doesn’t know who you are on Halloween.”

“Pixie, kobold, elf, and sprite, All are on their rounds tonight; In the wan moon’s silver ray, Thrive their helter-skelter play.”

“Men say that in this midnight hour, the disembodièd have the power to wander as it liketh them, By wizard oak and fairy stream.”

“I can see lights in the distance trembling in the dark cloak of night. Candles and lanterns are dancing, dancing a waltz on All Souls Night.”

“In masks and gowns we haunt the street and knock on doors for trick or treat tonight we are the king and queen, For oh tonight it’s Halloween!”

“When witches go riding, and black cats are seen, the moon laughs and whispers, ‘tis near Halloween.”

“A house is never still in darkness to those who listen intently; there is a whispering in distant chambers, an unearthly hand presses the snib of the window, the latch rises. Ghosts were created when the first man awoke in the night.”

“Eye of newt, and toe of frog, Wool of bat, and tongue of dog, Adder’s fork, and blind-worm’s sting, Lizard’s leg, and owlet’s wing, For a charm of powerful trouble, Like a hell-broth boil and bubble.”

“Oh how the candles will be lit and the wood of worm burn in a fiery dust. For on all Hallow’s Eve will the spirits come to play, and only the fruit of thy womb will satisfy their endless roaming.”

“Nothing beats a haunted moonlit night on All Hallows Eve… And on this fatal night, at this witching time, the starless sky laments black and unmoving. The somber hues of an ominous, dark forest are suddenly illuminated under the emerging face of the full moon.”

“Shadows of a thousand years rise again unseen, Voices whisper in the trees, “Tonight is Halloween!”

“May Jack-o-lanterns burning bright, Of soft and golden hue, Pierce through the future’s veil and show, What fate now holds for you?”

“Hark! Hark to the wind! ‘Tis the night, they say, when all souls come back from the far away- the dead, forgotten this many a day!”

“The witches fly Across the sky, The owls go, Who? Who? Who? The black cat’s yowl And green ghosts howl, Scary Halloween to you!”

“Nothing on Earth is so beautiful as the final haul on Halloween night.”