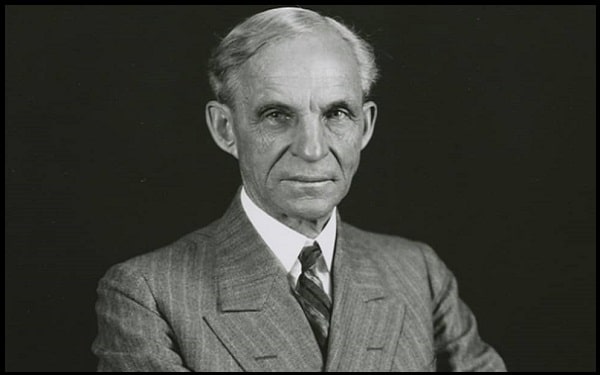 Henry Ford Quotes:- Henry Ford (July 30, 1863 – April 7, 1947) was an American industrialist and a business magnate, the founder of the Ford Motor Company, and the sponsor of the development of the assembly line technique of mass production.

Although Ford did not invent the automobile or the assembly line, he developed and manufactured the first automobile that many middle-class Americans could afford.

“If money is your hope for independence you will never have it. The only real security that a man will have in this world is a reserve of knowledge, experience, and ability.”-Henry Ford 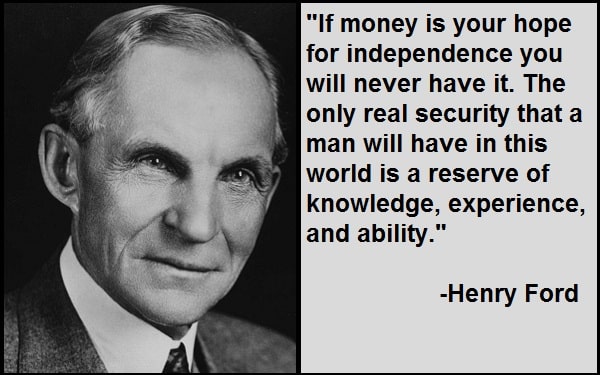 “It is well enough that people of the nation do not understand our banking and monetary system, for if they did, I believe there would be a revolution before tomorrow morning.”-Henry Ford

“Nothing is particularly hard if you divide it into small jobs.”-Henry Ford

“A business absolutely devoted to service will have only one worry about profits. They will be embarrassingly large.”-Henry Ford

“If everyone is moving forward together, then success takes care of itself.”-Henry Ford

“Even a mistake may turn out to be the one thing necessary to a worthwhile achievement.”-Henry Ford

“If there is any one secret of success, it lies in the ability to get the other person’s point of view and see things from that person’s angle as well as from your own.”-Henry Ford

“Enthusiasm is the yeast that makes your hopes shine to the stars. Enthusiasm is the sparkle in your eyes, the swing in your gait. The grip of your hand, the irresistible surge of will and energy to execute your ideas.”-Henry Ford

“Obstacles are those frightful things you see when you take your eyes off your goal.”-Henry Ford

“Anyone who stops learning is old, whether at twenty or eighty. Anyone who keeps learning stays young. The greatest thing in life is to keep your mind young.”-Henry Ford

“I am looking for a lot of men who have an infinite capacity to not know what can’t be done.”-Henry Ford

“Quality means doing it right when no one is looking.”-Henry Ford

“We don’t want tradition. We want to live in the present and the only history that is worth a tinker’s dam is the history we make today.”-Henry Ford

“Wealth, like happiness, is never attained when sought after directly. It comes as a by-product of providing a useful service.”-Henry Ford

“Any color – so long as it’s black.”-Henry Ford

“As we advance in life we learn the limits of our abilities.”-Henry Ford

“Before everything else, getting ready is the secret of success.”-Henry Ford

Quotes From Henry Ford On Business

“There is joy in work. There is no happiness except in the realization that we have accomplished something.”-Henry Ford

“My best friend is the one who brings out the best in me.”-Henry Ford

“The only real security that a man can have in this world is a reserve of knowledge, experience, and ability.”-Henry Ford

“Thinking is the hardest work there is, which is probably the reason why so few engage in it.”-Henry Ford

“You can’t build a reputation on what you are going to do.”-Henry Ford

“When everything seems to be going against you, remember that the airplane takes off against the wind, not with it.”-Henry Ford

“The competitor to be feared is one who never bothers about you at all but goes on making his own business better all the time.”-Henry Ford

“One of the greatest discoveries a man makes, one of his great surprises, is to find he can do what he was afraid he couldn’t do.”-Henry Ford

“Exercise is bunk. If you are healthy, you don’t need it: if you are sick you should not take it.”-Henry Ford

“An idealist is a person who helps other people to be prosperous.”-Henry Ford

“Whether you believe you can do a thing or not, you are right.”-Henry Ford

“Life is a series of experiences, each one of which makes us bigger, even though sometimes it is hard to realize this. For the world was built to develop character, and we must learn that the setbacks and grieves which we endure help us in our marching onward.”-Henry Ford

“A bore is a person who opens his mouth and puts his feats in it.”-Henry Ford

“I do not believe a man can ever leave his business. He ought to think of it by day and dream of it by night.”-Henry Ford

“I believe God is managing affairs and that He doesn’t need any advice from me. With God in charge, I believe everything will work out for the best in the end. So what is there to worry about.”-Henry Ford

“Time and money spent in helping men to do more for themselves are far better than mere giving.”-Henry Ford

“Money is like an arm or leg – use it or lose it.”-Henry Ford

“There is one rule for the industrialist and that is: Make the best quality of goods possible at the lowest cost possible, paying the highest wages possible.”-Henry Ford

“You will find men who want to be carried on the shoulders of others, who think that the world owes them a living. They don’t seem to see that we must all lift together and pull together.”-Henry Ford

“Competition is the keen cutting edge of business, always shaving away at costs.”-Henry Ford

“It has been my observation that most people get ahead during the time that others waste.”-Henry Ford

“Business is never so healthy as when, like a chicken, it must do a certain amount of scratching around for what it gets.”-Henry Ford

“Speculation is only a word covering the making of money out of the manipulation of prices, instead of supplying goods and services.”-Henry Ford

“Whatever you have, you must either use or lose.”-Henry Ford

“There is no man living that can not do more than he thinks he can.”-Henry Ford

“There are no big problems, there are just a lot of little problems.”-Henry Ford

“Most people spend more time and energy going around problems than in trying to solve them.”-Henry Ford

“I cannot discover that anyone knows enough to say definitely what is and what is not possible.”-Henry Ford

“The highest use of capital is not to make more money, but to make money do more for the betterment of life.”-Henry Ford