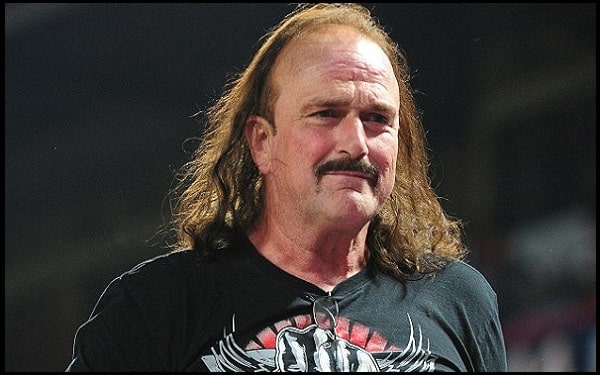 “I’m still stupid. I still do what I’m not supposed to do. Are you serious? I’m Jake ‘The Snake,’ man. I never claimed to be the sharpest knife in the drawer.”-Jake Roberts 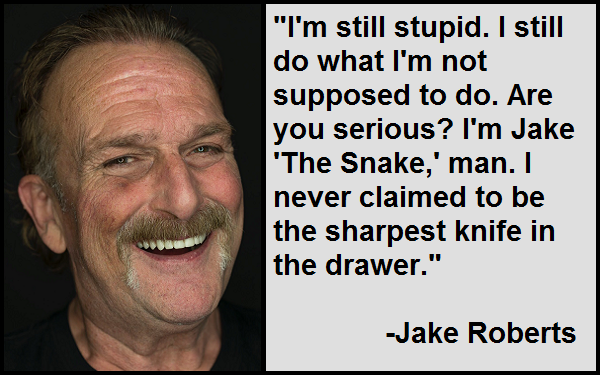 “You can’t live for a moment that may not happen. You need to live in the moment.”-Jake Roberts

“Miserable is a good thing, though. If you start the day miserable, nobody else can screw up your day.”-Jake Roberts

“You know what, when you screw up in the ring, it’s so embarrassing.”-Jake Roberts

“It’s the sad thing about entertainment, it’s not always about who is the best.”-Jake Roberts

“Every moment is an experience.”-Jake Roberts

“I did it the stupid way, through trial and error.”-Jake Roberts

“A child’s hope is that your father comes riding in on that white stallion and saves them. You can’t make somebody love you the way you want them to love you, it’s not a Leave it to Beaver type world. This isn’t television. Life’s a lot crueler than that.”-Jake Roberts

“I went to visit my father to tell him that I was going to go to college and become an architect – that was my dream. I was like, yeah I graduated from school, but it’s not like you showed up for that. But all he was worried about is whether or not I wanted money from him.”-Jake Roberts

“Jake Roberts has a hard enough time being “-Jake Roberts. The truth is a brutal thing, I just hope that the kids take the time to learn about each of the wrestlers in the game, and if the kids can learn from our mistakes, that would make me a happy man.”-Jake Roberts

“My dream is to leave this business on my own terms, and if it were my terms, I would love to do the Royal Rumble. I would love to do Wrestle Mania in New Orleans because I had so many matches there over the years working for Mid-South. I was in the ring with Muhammad Ali in the Superdome. To close it there would be great.”-Jake Roberts

“I still enjoy performing, whether it’s in front of two people or 2,000 people, but it’s not fun once you leave the big show.”-Jake Roberts

“If you start the day miserable, nobody else can screw up your day.”-Jake Roberts

“I went through a lot in life that scared me pretty good. I built a wall around myself to the point where nobody knew what was really going on inside of me, including myself.”-Jake Roberts

“There is this great, great wrestler, who never really got an opportunity to be a star, named Len Denton: he was a masked guy called The Grappler. He was one of my favorite guys to ever wrestle, and it was just a tremendous pleasure to step in the ring with him.”-Jake Roberts

“I just enjoy being around fans, man.”-Jake Roberts

“When you screw up in the ring, it’s so embarrassing. But the fans don’t know you screwed up unless you act like you just made a mistake.”-Jake Roberts

“Diamond Dallas saved my life. He didn’t have to, but that’s the kind of guy he is. He’s helped so many people with his DDP Yoga. It’s just incredible with the lives he’s changing, the lives he’s affecting. I am so honored to be part of that.”-Jake Roberts