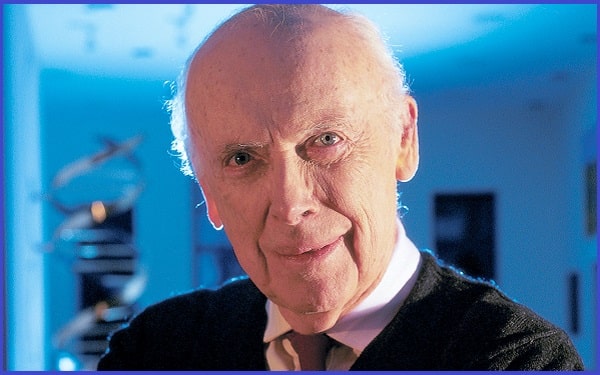 “I would only once have the opportunity to let my scientific career encompass a path from the double helix to the three billion steps of the human genome.”-James D. Watson 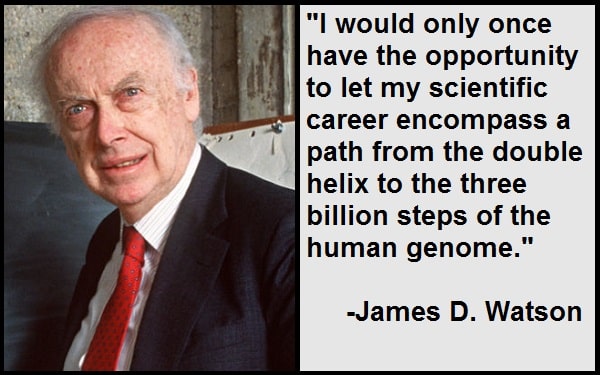 “My heroes were never scientists. They were Graham Greene and Christopher Isherwood, you know, good writers.”-James D. Watson

“I think the reason people are dealing with science less well now than 50 years ago is that it has become so complicated.”-James D. Watson

“It’s necessary to be slightly underemployed if you are to do something significant.”-James D. Watson

“The ever-quickening advances of science made possible by the success of the Human Genome Project will also soon let us see the essence of mental disease. Only after we understand them at the genetic level can we rationally seek out appropriate therapies for such illnesses like schizophrenia and bipolar disease.”-James D. Watson

“I wanted to see if I could write a good book.”-James D. Watson

“The luckiest thing that ever happened to me was that my father didn’t believe in God, and so he had no hang-ups about souls.”-James D. Watson

“Science has always been my preoccupation and when you think a breakthrough is possible, it is terribly exciting.”-James D. Watson

“Today, the theory of evolution is an accepted fact for everyone but a fundamentalist minority, whose objections are based not on reasoning but on doctrinaire adherence to religious principles.”-James D. Watson

“I was always very curious about what a scientist’s life was like when I was young. Of course, when I was young, you didn’t have very many opportunities to find out with no web, TV. I was very lucky: I was born in the city of Chicago and went to the University of Chicago where I actually saw things.”-James D. Watson

“My wife and I have a schizophrenic son. We didn’t want to accept this for 30 years, so we put him under great pressure when we shouldn’t have. He just wanted to be looked after, and we didn’t respect that. We tried to make him independent.”-James D. Watson

“If someone’s liver doesn’t work, we blame it on the genes; if someone’s brain doesn’t work properly, we blame the school. It’s actually more humane to think of the condition as genetic. For instance, you don’t want to say that someone is born unpleasant, but sometimes that might be true.”-James D. Watson

“If you accept that people are the products of evolution, then you have to have an open mind to the truth. Unfair discrimination exists whether we like it or not; I wouldn’t have married a gum-chewing vegetarian.”-James D. Watson

“I never could read science fiction. I was just uninterested in it. And you know, I don’t like to read novels where the hero just goes beyond what I think could exist. And it doesn’t interest me because I’m not learning anything about something I’ll actually have to deal with.”-James D. Watson

“If you go into science, I think you better go in with a dream that maybe you, too, will get a Nobel Prize. It’s not that I went in and I thought I was very bright and I was going to get one, but I’ll confess, you know, I knew what it was.”-James D. Watson

“I have a son, who is a… not an ordinary form of schizophrenia, but clearly, cannot take care of himself. And the great fear of then, of all parents, is, when the parents die, who takes care of your child? And the answer is: they become homeless.”-James D. Watson

“An idea can be tested, whereas if you have no idea, nothing can be tested and you don’t understand anything. The molecule that you make when you are getting sunburned or when you eat a lot of food is part of the same molecule that contains an endorphin or an opiate. No one has ever had a hypothesis about why the two are together.”-James D. Watson

“I’ve had strong opinions probably since I was born. It makes you unpopular, but what can you do?”-James D. Watson

“I want to see cancer cured in my lifetime. It might be.”-James D. Watson

“I started doing science when I was effectively 20, a graduate student of Salvador Luria at Indiana University. And that was – you know, it took me about two years, you know, being a graduate student with Luria deciding I wanted to find the structure of DNA; that is, DNA was going to be my objective.”-James D. Watson

“My whole life has been basically trying to find intelligent students or, you know, highly motivated students and giving them an opportunity to do good science.”-James D. Watson

“I wish there would be more movies about scientists.”-James D. Watson

“I don’t want 100 different cures of cancer. I want, you know, give me five. So if you had, you know, five medicines, you could do away with 90 percent of cancer. That’s sort of my objective. I think we’re going to do it.”-James D. Watson

“One-third of all female infertility is the result of blocked fallopian tubes. If fertilization could be done in the lab and then the fertilized egg implanted in the womb, it would get around that problem. Millions of women who cannot have children would suddenly be able to.”-James D. Watson

“A clone of Einstein wouldn’t be stupid, but he wouldn’t necessarily be any genius, either.”-James D. Watson

“Ever since we achieved a breakthrough in the area of recombinant DNA in 1973, left-wing nuts and environmental kooks have been screaming that we will create some kind of Frankenstein bug or Andromeda Strain that will destroy us all.”-James D. Watson

“The time has come to seriously ask whether antioxidant use much more likely causes than prevents cancer.”-James D. Watson

“I don’t want to die until I see cancer cured.”-James D. Watson

“As a child, I lived with being punier than other boys in the class. The only consolation was my parents’ empathy – they encouraged constant trips to the local drugstore for chocolate milkshakes to fatten me up. The shakes made me happy, but still, all through grammar school, other kids shoved me around.”-James D. Watson

“It is no coincidence that so many religious beliefs date back to times when no science could possibly have accounted satisfactorily for many of the natural phenomena inspiring scripture and myths.”-James D. Watson

“I had become monomaniacal about DNA only in 1951 when I had just turned 23 and as a postdoctoral fellow was temporarily in Naples attending a small May meeting on biologically important macromolecules.”-James D. Watson

“I have never seen Francis Crick in a modest mood. Perhaps in another company, he is that way, but I have never had reason so to judge him.”-James D. Watson