“The government and the people are under a moral necessity of acting together; a free press compels them to bend to one another.”-James Mill 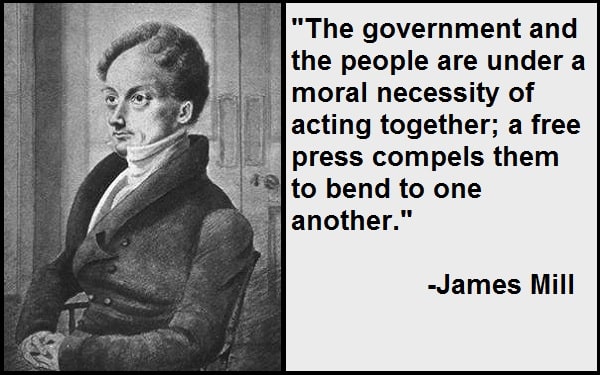 “No good government can ever want more than two things for its support: 1st, Its own excellence; and, 2dly, a people sufficiently instructed, to be aware of that excellence. Every other pretended support must ultimately tend to its subversion, by lessening its dependence upon these.”-James Mill

“If nature had produced spontaneously all the objects which we desire, and insufficient abundance for the desires of all, there would have been no source of dispute or of injury among men; nor would any man have possessed the means of ever acquiring authority over another.”-James Mill

“Whenever the powers of government are placed in any hands other than those of the community, whether those of one man, of a few or of several, those principles of human nature which imply that government is at all necessary, imply that those persons will make use of them to defeat the very end for which government exists.”-James Mill