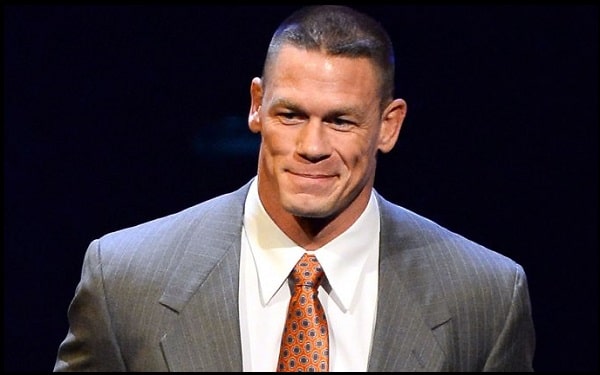 John Cena Quotes:- John Cena (born April 23, 1977) is an American professional wrestler, actor, rapper, and television presenter. As a wrestler, he is signed to WWE. As a TV presenter, he is the host of Are You Smarter Than a Fifth Grader? on Nickelodeon.

“I don’t think my body’s gonna go to hell if I train for performance. It might change a little and adapt, but I like being strong.”-John Cena 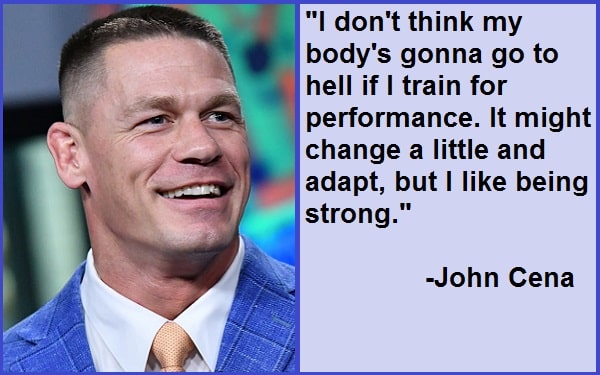 “My home is at WWE. I truly do love performing. The atmosphere here isn’t like anything else. It’s truly where I belong.”-John Cena

“Your job as a superstar is to manipulate the audience and try to tell your story. I like the dynamic of the audience.”-John Cena

“I take pride in the fact that a lot of little kids dig what I do.”-John Cena

“Being able to swing in and host the ‘Today’ show when they call me, it certainly is a new experience that I have a lot of fun with, and it’s different than being in the middle of the ring in ‘Monday Night Raw.'”-John Cena

“There will be a time when I won’t be able to perform in the ring.”-John Cena

“My dad is not a sports guy but was drawn to the theatrics of wrestling.”-John Cena

“I took the California Highway Patrol exam and didn’t pass, so I tried to be a cop and failed.”-John Cena

“The days I see a Make-A-Wish kid are the best days of the week. It’s a real privilege. I give them exactly what they give me – hope.”-John Cena

“I think Edge has completely put himself on the map as a bona fide WWE superstar.”-John Cena

“When you see me on TV, that’s about as close to my real personality as you can get.”-John Cena

“By the time I was 15 and I stepped in the high school gym, I was just stronger than everybody.”-John Cena

“Winning the Royal Rumble is as big an accomplishment as anything.”-John Cena

“Tropic Thunder’ is one of my favorite movies of all time. ‘Blazing Saddles.’ Anything that will get me to smile.”-John Cena

“I’m the guy who’ll drive 250 miles tonight and be at the gym tomorrow at 10 A.M. when people are still sleeping in. I’m the guy who’ll fly to Australia and find a gym. Flyback and the first thing I do off the plane works out before I shower or eat.”-John Cena

“I’m fine with being beat-up and pushed around, but I’m really scared of heights and scared of ledges.”-John Cena

“Chicago fans cheer and boo who they want. They’re great fans whether they like me or not. They show you how they feel. I don’t like crowds that sit on their hands.”-John Cena

“I hate any match that isn’t a traditional Tag Team Match or a traditional Singles Match because anything can happen. It’s truly one of those deals where it’s all about being in the right place at the right time.”-John Cena

“Every member of the U.S. Armed Forces knows what they signed up for, and they know what their job is, and they are proud of their job.”-John Cena

“Being able to control a live crowd at the ESPYs, that’s fun.-“-John Cena

“Hip-hop certainly is in sync with the youth, and every day that passes, I grow less youthful, as much as I have tried to hold onto it.”-John Cena

“As far as me participating in ‘WrestleMania 32’, the Magic 8-Ball says, ‘Ask again later.'”-John Cena

“Regardless of the perception that the talent may have or the Superstars may have, WWE’s business model is ‘give the fans what they want.'”-John Cena

“I’ve always been a fan of Derek Jeter. Guys that consistently, throughout a long-term career, that not only have success but are very aware of their situation – I really dig that.”-John Cena

“Amazingly enough, the athletic achievement is one of those things that seems larger than life at points. I think we all look to sport for inspirations.”-John Cena

“Nothing gets my blood pumping like a little Animotion.”-John Cena

“As soon as I found out there was a school you could go to become a WWE superstar, I was immediately hooked.”-John Cena

“Just like I have my critics, Dwayne ‘The Rock’ Johnson has critics, and I was one of the biggest ‘Hey man, you’re never here’ guys around, but not anymore. He’s completely committed to WWE.”-John Cena

“My life is with WWE.”-John Cena

“The only time I ever get choked is when I’m at Make-A-Wish headquarters because you’re talking and working with people who share the same ideals.”-John Cena

“I really want to thank the whole Phoenix-Scottsdale-Glendale area. It’s been a wonderful home for WWE for years.”-John Cena

“I’m going to be wrestling for as long as I can. It’s something I’m very passionate about and something that I love.”-John Cena

“My favorite anime movie is ‘Fist of the North Star’.”-John Cena

“I play golf once in a while. I certainly love to train. I’m also a big fan of NASCAR and Japanimation.”-John Cena

“I got a bunch of my own, but my favorite signature move of all time is Ric Flair’s Figure Four Leglock.”-John Cena

“The first thing you have to understand is that freestyling is much different than making hip-hop music: there’s another whole element to being a hip-hop MC.”-John Cena

“I’m big into the PlayStation 2. From what I’ve heard, the Xbox is the better system, but I can’t get used to that controller.”-John Cena

“The coolest thing to me, and especially now that our program is PG-friendly, and we advertise that to the hilt, but fathers and mothers come up to me and tell me to keep doing what I’m doing because I’m a good role model for their kids.”-John Cena

“The big moments for me are moments when I can actually contribute.”-John Cena

“If you broke down my technique, it wouldn’t really take a rocket scientist to do so.”-John Cena

“Whether you like me or you don’t, I still dig showing up for work.”-John Cena

“A relationship is based on communication.”-John Cena

“My favorite city is anything close to home. Anytime I can sleep in my own bed, that’s a good one.”-John Cena