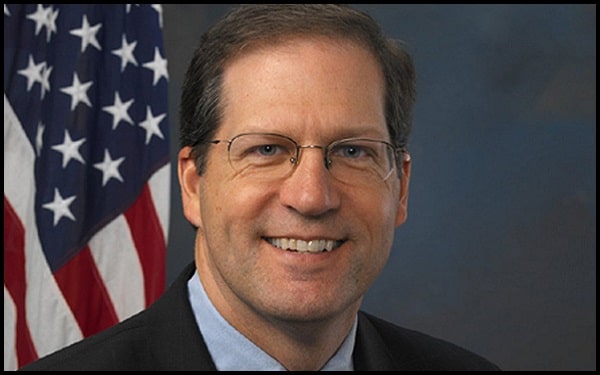 “Defining marriage is a power that should be left to the states. Moreover, no state should be forced to recognize a marriage that is not within its own laws, Constitution, and legal precedents.”-John E Sununu 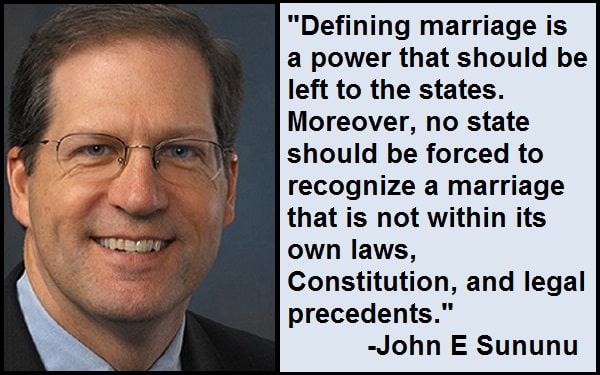 “I do not support raising the minimum wage, and the reason is as follows. When the minimum wage is raised, workers are priced out of the market. That is the economic reality that seems, at least so far, to be missing from this discussion.”-John E Sununu

“Don’t let that weapon technology proliferate. Don’t let Saddam Hussein get capability for nuclear or chemical weapons, because he’s already shown a willingness to use any weapon at his disposal.”-John E Sununu

“For my children, it makes sense to talk about modernizing Social Security, letting them create stronger personal accounts, letting them get a higher rate of return over the long run.”-John E Sununu

“I’m running for senator because it’s time for a change.”-John E Sununu

“If you wait until those weapons pose a direct, clear, present danger to the United States, you’ve probably waited too long.”-John E Sununu

“It worries me about our unwillingness to really address reforms and modernization in Medicare. This thing was designed 37 years ago. It has not evolved to keep pace with current medical technology.”-John E Sununu

“It’s good to give seniors more choices and more options, let them choose a plan that’s best for them and target assistance to the lowest income people.”-John E Sununu

“This is a technology that will not go away. And to risk it moving into the hands of a terrorist group like al Qaeda or to other focused enemies of the United States, would have tragic consequences.”-John E Sununu

“When we’re talking about technology that involves weapons of mass destruction, nuclear, chemical or biological weapons, there has to be an element of preemption.”-John E Sununu

“The American formula for creating business is not to have the government create the business.”-John E Sununu

“Mitt Romney has made it clear that he believes that President Obama was born in the U.S.”-John E Sununu

“President Obama has outsourced a major portion of the U.S. space program to the Russians. That’s national policy. Taxpayer money. So let’s stop playing games with this outsourcing distortion and talk about the fact that when we need is a president that knows how to manage big enterprise and create jobs.”-John E Sununu

“The voters are going to decide in November who is going to fix their personal family dismay over not having jobs in America. They are going to pick Mitt Romney.”-John E Sununu

“Obama hasn’t passed a budget in four years, he’s a wuss. Obama has rejected the recommendation of his own Simpson-Bowles, on a budget package, he’s a wuss. He wants to lead from behind, he’s a wuss!”-John E Sununu

“I understand the process of politics and the game of television.”-John E Sununu

“The public should begin to understand that there’s nothing that comes out of this campaign or this Obama White House, that they can believe. It truly is all misrepresentation and deception.”-John E Sununu

“You don’t want to get so distracted, focusing on what the opposition is putting forth that you forget to remind America that the real issue is 8.3 percent unemployment, virtually no growth at all in an economy that has been in shambles for the last four years under Obama.”-John E Sununu

“The principal role of the President of the United States is the security of the country and participating in trying to stabilize the world.”-John E Sununu

“As a boy, when I was bad, my mother would chew me out in Spanish. And since I was bad a lot, I learned a lot of Spanish!”-John E Sununu

“The nominee is Mitt Romney. Paul Ryan joins Mitt Romney. The budget plan, the approach on Medicare and all of that is going to be the Romney plan. What he has is a man as his number two who understands the details of budgets, who has demonstrated a willingness to take on tough issues.”-John E Sununu

“The constant need for special waivers is symptomatic of poorly written public policy. It’s a signal that the cost of compliance is unreasonably high; the benefits are hard to measure, and either legislators or regulators have failed to do their homework.”-John E Sununu

“Politicians also have a love affair with the ‘small business exemption.’ Too much paperwork? Too heavy a burden? Not enough time? Just exempt small businesses from the rule. It sounds so pro-growth. Instead, it’s an admission that the costs of regulation just can’t be justified.”-John E Sununu

“It doesn’t take Warren Buffett to realize that when companies don’t know what new rules will look like, it affects their ability to commit capital and create new jobs.”-John E Sununu

“Not since the steam engine has any invention disrupted business models like the Internet. Whole industries including music distribution, yellow-pages directories, landline telephones, and fax machines have been radically reordered by the digital revolution.”-John E Sununu

“The Internet will win because it is relentless. Like a cannibal, it even turns on its own. Though early portals like Prodigy and AOL once benefited from their first-mover status, competitors surpassed them as technology and consumer preferences changed.”-John E Sununu

“The Internet creates as well as destroys. Social networks, search advertising, and cloud computing are multibillion-dollar industries that didn’t exist 10 years ago. They are products of the same force that has rendered the Postal Service’s core business obsolete.”-John E Sununu

“Energy and environmental regulation, transportation, and broadband policy all benefit when legislators have a basic grounding in the technical concepts behind business models, products, and innovation.”-John E Sununu

“Officeholders are a self-selected group; you don’t get elected if you don’t put your name on the ballot. There are many people who would do a great job, but who would never think to run. Find them. Badger them. Get them elected. They might not thank you for it, but a lot of other people will.”-John E Sununu

“The media love coarse debate because coarse debate drives ratings and ratings generate profits. Unless the TV producer happens to be William Shakespeare, an argument is more interesting than a soliloquy – and there will never be a shortage of people willing to argue on TV.”-John E Sununu

“Politicians wishing to set a better tone should have the discipline to avoid televised cage matches.”-John E Sununu

“It’s counterintuitive, but the most divisive arrangement is when the same party controls both Congress and the presidency, a situation encountered in eight of the past 10 years. With government unified under a single party, the minority has the least possible incentive to cooperate with the majority.”-John E Sununu

“Barack Obama’s life was so much simpler in 2009. Back then, he had refined the cold act of blaming others for the bad economy into an art form. Deficits? Blame Bush’s tax cuts. Spending? Blame the wars in Iraq and Afghanistan. No business investment? Blame Wall Street.”-John E Sununu

“Political pandering comes in all shapes and sizes, but every four years the presidential primary brings us in contact with its purest form – praising ethanol subsidies amid the cornfields of Iowa.”-John E Sununu

“The debt-ceiling vote isn’t about what will be done in the future; it is about the integrity of America’s commitment to supporting the bonds we issue. Elected officials have an obligation to maintain that integrity, regardless of whether they voted for the programs that required the borrowing in the first place.”-John E Sununu

“Bureaucrats behave very differently than a private-sector manager because their motivations are different. Permanent bureaucrats, no matter how senior, worry about their next job.”-John E Sununu

“We’ll always have bureaucracies, but bureaucracies led by bureaucrats might be too much of a bad thing.”-John E Sununu

“A candidate who tries to steer a path down the middle in an effort to ‘win independents’ runs the risk of convincing everyone that they have no core values. As much as – or more than – any other voters, independents want to see conviction and authenticity.”-John E Sununu