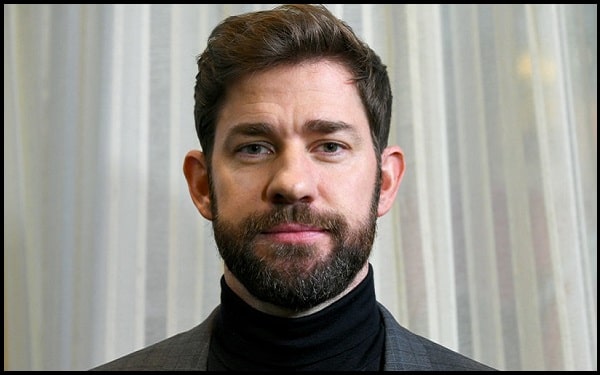 John Krasinski Quotes:- John Krasinski (born October 20, 1979) is an American actor and filmmaker. He is the recipient of a number of accolades, including four Primetime Emmy Award nominations and two Screen Actors Guild Awards.

“I’m really not feeling one way or the other with comedy or drama, I’m just sort of doing projects that I’ve been finding really fun to be a part of.”-John Krasinski 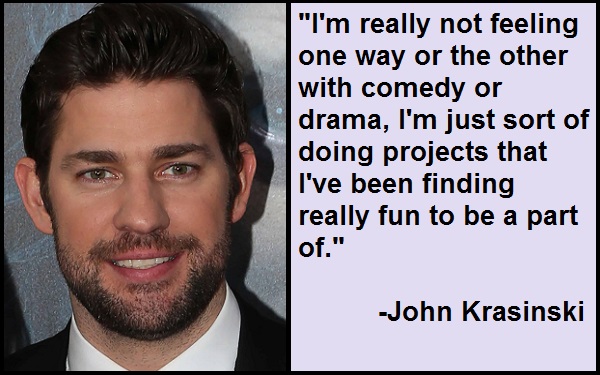 “I think one of the coolest things about the job is the level of trust we have for each other. The actors fully trust that the writers will write amazing episodes, and the writers trust that the actors will follow their instincts with the characters.”-John Krasinski

“I used to make fun of my friends who had BlackBerries. And I know that the expression CrackBerry has been going around, but now I fully understand it. I’m actually addicted to a piece of machinery, and that’s really embarrassing.”-John Krasinski

“My favorite water cooler topic is fantasy football. I used to make fun of friends for doing it and now I’m obsessed.”-John Krasinski

“My name was originally John Collins, but I just didn’t think it had the flair I needed. I found out the poet laureate of Poland was named Krasinski and so it seemed like a shoo-in for show business.”-John Krasinski

“The perfect gadget would somehow allow me to fly. Isn’t that what everybody wants? It would also cook a damn good microwave pizza. So while in flight you had something to eat – an in-flight meal. Where would I go? Well, nowadays, it would probably just take me to work a lot quicker.”-John Krasinski

“Most of the people I know who work out seriously do so because they have such an amazing outlook on life. To be who I want to be, I’m going to work out to be more positive, more active. It’s proactive.”-John Krasinski

“You can’t do anything to be funny. That’s cringeworthy. If your humor comes out of a place of love every time, you don’t make the joke bigger than you. The funniest comedians are in touch with their emotional level.”-John Krasinski

“I wanted to be an English teacher. I wanted to do it for the corduroy jackets with patches on the side. When I got to college, as I was walking across campus one day, I ripped off a little flyer for this sketch-comedy group. It ended up being one of the greatest things I’ve ever done.”-John Krasinski

“I’m a huge classics fan. I love Ernest Hemingway and J.D. Salinger. I’m that guy who rereads a book before I read newer stuff, which is probably not all that progressive, and it’s not really going to make me a better reader. I’m like, ‘Oh, my God, you should read To Kill a Mockingbird.'”-John Krasinski

“Guys have a level of insecurity and vulnerability that’s exponentially bigger than you think. With the primal urge to be alpha comes extreme heartbreak. The harder we fight, the harder we fall.”-John Krasinski

“I’m not trying to be the triple threat guy. I’m still working on this one threat; acting.”-John Krasinski

“The way the British ‘Office’ got away with being so dark was that it only had 13 episodes. There are real elements that people obviously enjoy, but they don’t necessarily want to relive the trials and tribulations of their average workday.”-John Krasinski

“We can appear to be tough as nails, but guys have a level of insecurity and vulnerability that’s exponentially bigger than you think. With the primal urge to be alpha comes extreme heartbreak. The harder we fight, the harder we fall.”-John Krasinski

“I taught English in Costa Rica before I went to college. I’m not an especially outdoorsy guy, but sometimes I would spot wildlife while whitewater rafting or walking in the rainforest at 5 A.M.”-John Krasinski

“It’s definitely particular to each situation, but whether it is a long history or someone that you’re intimidated by or someone that you didn’t think you ever had a shot at, at the end of the day, I think we’re all living through high school, every day.”-John Krasinski

“If you did go to high school and then college, there’s definitely solidarity with someone that is from your hometown and knows your mom and all that stuff.”-John Krasinski

“There’s a large oak tree in the Newton Centre park playground that is legendary because only a few humans have hit it with a baseball from home plate, and B.J. Novak is among them. And I was there that day.”-John Krasinski

“I learned that the best way to work is to allow the scene to live on its own before making major adjustments, whether in rehearsal or on film.”-John Krasinski

“It looks like I’ve been smart about it, but truly, I’ve been incredibly lucky to have the right people notice me and want to work with me.”-John Krasinski

“People aren’t throwing themselves at me, but I also don’t go out very much. Like, when I do go out, it’s for breakfast, so it’s a little hard to throw yourself at me during breakfast.”-John Krasinski

“I don’t go out – ever. I’m lucky enough to have awesome friends, and we always end up at someone’s house. We’re big house-party guys.”-John Krasinski

“Luckily, I have two of the coolest parents around. They’re so open about having any and all experiences, so they never hindered us in any way by categorizing or judging anything.”-John Krasinski

“Hearing anyone think that I’m any form of sexy or handsome is incredibly flattering.”-John Krasinski

“When I got to college, as I was walking across campus one day, I ripped off a little flyer for this sketch-comedy group. It ended up being one of the greatest things I’ve ever done.”-John Krasinski

“I’ve never been someone who dates all that much – I’m more of a serial monogamist.”-John Krasinski

“I was one of those kids who had never seen an indie film before I got to college. If it wasn’t a big, huge tentpole movie, or if it wasn’t on the radio, I hadn’t experienced it.”-John Krasinski

“I remember when I saw ‘Eternal Sunshine of the Spotless Mind,’ I wanted to go out and direct a movie right there on the streets of Manhattan. Unfortunately, you can’t without permits.”-John Krasinski

“I love feeling strong. You pick up your daughter with ease while everyone else makes a little grunt when they pick up their kids.”-John Krasinski

“I always stay with my parents. When you come home, you gotta do that. It’s weird to be like, ‘Hey, I’m at a hotel. Drive 20 minutes to see me, and we’ll have dinner.'”-John Krasinski

“For me, ‘Arrested Development’ is the cornerstone of recent television comedy. It’s so incredibly flawless and perfect.”-John Krasinski

“It’s funny: I’ve always had the analogy of a snow globe, that Hollywood is a snow globe. No, it’s true. If you shake it up, you can look at it and really enjoy it. But don’t ever go in. Don’t ever buy into it and be like, ‘I deserve all of this!’ because it can go away at any time, so just have a lot of fun.”-John Krasinski