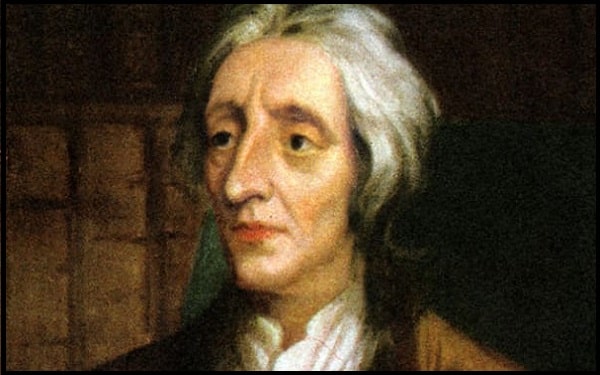 John Locke Quotes:- John Locke (29 August 1632 – 28 October 1704) was an English philosopher and physician, widely regarded as one of the most influential of Enlightenment thinkers and commonly known as the “Father of Liberalism”

“The Bible is one of the greatest blessings bestowed by God on the children of men. It has God for its author; salvation for its end, and truth without any mixture for its matter. It is all pure.”-John Locke 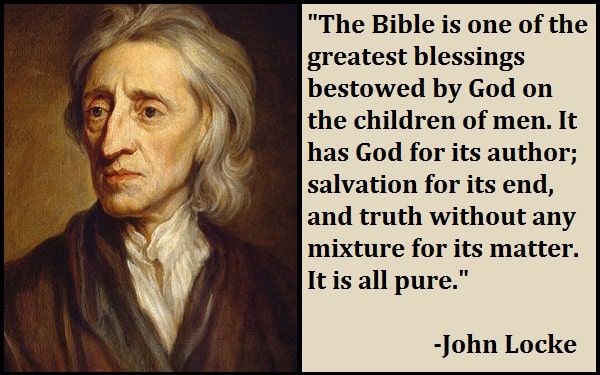 “All mankind… being all equal and independent, no one ought to harm another in his life, health, liberty or possessions.”-John Locke

“The improvement of understanding is for two ends: first, our own increase of knowledge; secondly, to enable us to deliver that knowledge to others.”-John Locke

“Government has no other end, but the preservation of property.”-John Locke

“To love our neighbor as ourselves is such a truth for regulating human society, that by that alone one might determine all the cases in social morality.”-John Locke

“The end of law is not to abolish or restrain, but to preserve and enlarge freedom. For in all the states of created beings capable of law, where there is no law, there is no freedom.”-John Locke

“What worries you, masters, you.”-John Locke

“No man’s knowledge here can go beyond his experience.”-John Locke

“Every man has a property in his own person. This nobody has a right to, but himself.”-John Locke

“We are like chameleons, we take our hue and the color of our moral character, from those who are around us.”-John Locke

“It is easier for a tutor to command than to teach.”-John Locke

“The discipline of desire is the background of the character.”-John Locke

“All men are liable to error; and most men are, in many points, by passion or interest, under temptation to it.”-John Locke

“Fortitude is the guard and support of the other virtues.”-John Locke

“I have always thought the actions of men the best interpreters of their thoughts.”-John Locke

“The only fence against the world is a thorough knowledge of it.”-John Locke

“We should have a great fewer dispute in the world if words were taken for what they are, the signs of our ideas only, and not for things themselves.”-John Locke

“An excellent man, like precious metal, is in every way invariable; A villain, like the beams of a balance, is always varying, upwards and downwards.”-John Locke

“All wealth is the product of labor.”-John Locke

“Our incomes are like our shoes; if too small, they gall and pinch us; but if too large, they cause us to stumble and to trip.”-John Locke

“I have spent more than half a lifetime trying to express the tragic moment.”-John Locke

“Reading furnishes the mind only with materials of knowledge; it is thinking that makes what we read ours.”-John Locke

“It is of great use to the sailor to know the length of his line, though he cannot with it fathom all the depths of the ocean.”-John Locke

“Our deeds disguise us. People need endless time to try on their deeds until each knows the proper deeds for him to do. But every day, every hour, rushes by. There is no time.”-John Locke

“The reason why men enter into society is the preservation of their property.”-John Locke

“Reverie is when ideas float in our mind without reflection or regard of the understanding.”-John Locke

“Where all is but a dream, reasoning and arguments are of no use, truth, and knowledge nothing.”-John Locke

“A sound mind in a sound body is a short, but full description of a happy state in this World: he that has these two, has little more to wish for; and he that wants either of them, will be little the better for anything else.”-John Locke

“I attribute the little I know to my not having been ashamed to ask for information, and to my rule of conversing with all descriptions of men on those topics that form their own peculiar professions and pursuits.”-John Locke

“There cannot be greater rudeness than to interrupt another in the current of his discourse.”-John Locke

“Parents wonder why the streams are bitter when they themselves have poisoned the fountain.”-John Locke

“To prejudge other men’s notions before we have looked into them is not to show their darkness but to put out our own eyes.”-John Locke

“One unerring mark of the love of truth is not entertaining any proposition with greater assurance than the proofs it is built upon will warrant.”-John Locke

“Anyone reflecting upon the thought he has of the delight, which any present or absent thing is apt to produce in him, has the idea we call love.”-John Locke

“Things of this world are in so constant a flux, that nothing remains long in the same state.”-John Locke

“New opinions are always suspected, and usually opposed, without any other reason but because they are not already common.”-John Locke

“As people are walking all the time, in the same spot, a path appears.”-John Locke

“The dread of evil is a much more forcible principle of human actions than the prospect of good.”-John Locke

“It is one thing to show a man that he is in an error, and another to put him in possession of the truth.”-John Locke

“There is frequently more to be learned from the unexpected questions of a child than the discourses of men.”-John Locke