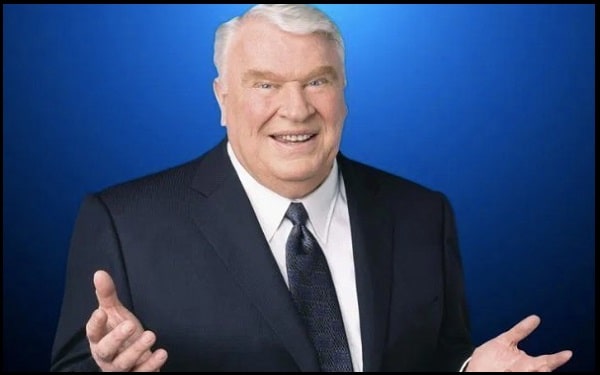 John Madden Quotes:- John Madden (born April 10, 1936) is an American former football coach and sportscaster. He won a Super Bowl as head coach of the Oakland Raiders, and after retiring from coaching became a well-known color commentator for NFL telecasts.

“Discipline is knowing what you’re supposed to do and doing it as best you can… On third down and short yardage, the Raiders don’t jump offside. That’s discipline – not a coat and tie, not a clean shave.”-John Madden 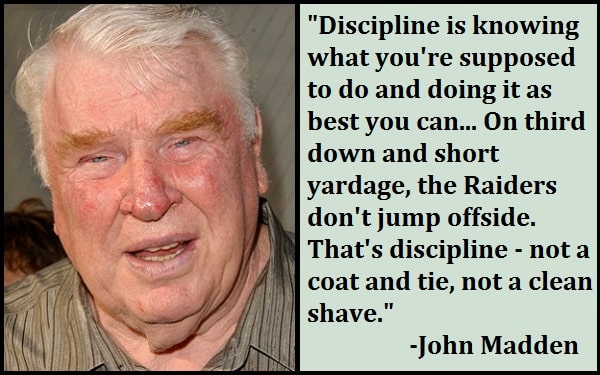 “Every time I go to the theater, there’s something about the atmosphere, seeing something unfold live in front of an audience, that you can’t get out of your system.”-John Madden

“If you think about it, I’ve never held a job in my life. I went from being an NFL player to a coach to a broadcaster. I haven’t worked a day in my life.”-John Madden

“Don’t worry about the horse being blind, just load the wagon.”-John Madden

“When your arm gets hit, the ball is not going to go where you want it to.”-John Madden

“If you see a defense team with dirt and mud on their backs they’ve had a bad day.”-John Madden

“I’m sure that had I not been a coach, I would have been some form of a teacher.”-John Madden

“I’d like to work with kids in special education – younger kids.”-John Madden

“I get a certain feeling when I go to Lambeau Field in Green Bay. Soldier Field in Chicago is special to me. Those are the places that I really like. The stadiums.”-John Madden

“To me, discipline in football occurs on the field, not off it.”-John Madden

“If you go back to the history of the ‘Madden’ game, I was probably on the cover of it half the time. So if I was to believe there was a curse, I would also have to believe I’d been cursed. And I’ve never had that feeling.”-John Madden

“If you play the video game, you become more interested and you want to know more about it. You want to read as much about it as you can, see it live and watch as many games as you can. If you’re the type who wants to be as involved as you can in the sport, you’re probably going to want to play ‘Madden NFL.'”-John Madden

“Someday we’re gonna have interactive television where you can pick the shot that you want. You can watch defense, or you can watch the end-zone shot, or you can watch an isolated shot of Terance Mathis or whoever you want to. Because right now, the only thing that you watch is what the producer or director decides to show you.”-John Madden

“Sometimes we think videogames are just games for kids, and then once they get out of grammar school or high school, they never play again, but that’s when they really start playing.”-John Madden

“In all the years that I’ve been in football – I went directly from coaching to broadcasting – I never really had a lot of experience watching it.”-John Madden

“I have this set-up at my house where I have one big movie theater screen that’s 9 ft. by 16 ft. Then, I have nine 63-inch monitors around it; four on either side and one underneath. So I get all nine one o’clock games, and I can switch them onto the big screen. That’s what I do on Sundays during the season.”-John Madden

“Trip Hawkins – and this was the early 1980s – was saying there’s going to be a day when everyone has a computer and they’re going to want to do more on it, including playing games. So he started up a company, EA Sports, and he was going to have three games, football, basketball, and baseball. So I was the football game.”-John Madden

“Any defensive coordinator is worried about two things: a running quarterback and a deep ball. You know, don’t get beat deep and don’t let the quarterback run, because a big part of your defense can’t account for the quarterback as a runner, so he gets a free run.”-John Madden

“They’re on the right road, but there’s a long way to go on concussions, not only in the NFL, but college football, high school football, and all football.”-John Madden

“We need the quarterbacks. It’s a passing league and a quarterback-driven league. We need the Peyton Mannings in football uniforms out there playing – the Tom Bradys, the Drew Breeses, the Philip Reverses – we need those guys instead of them standing on the sideline.”-John Madden

“I’ve never eaten just a few bites of things I liked in my life.”-John Madden

“If you look at tailgating, everyone does it. It’s for everyone who likes to cook outdoors. It could be a 4th of July picnic.”-John Madden

“Knowing his coach likes him is more important to a player than anything else. To me, it was important to be able to chew out a player for screwing up and for him to accept it because he knew I liked him anyway.”-John Madden

“If someone remembers me as a coach, they still call me ‘Coach,’ but if they know me for the video game, they just call me ‘Madden.'”-John Madden

“It’s been the video game ever since I got out of coaching. Even when I was an announcer, fewer and fewer people remembered me as ‘Coach,’ and as the years went on, people just started knowing me from the game.”-John Madden

“I’ve got five grandkids. They play baseball, they play football, they play basketball. I go to all the games. You always have that urge to say something when you’re watching them. But I’ve learned to keep it to myself. I’ve blurted out some things and embarrassed myself.”-John Madden

“Both of my sons used to coach high school football. When they started, I’d say things I shouldn’t have. So I learned my lesson.”-John Madden

“Baseball has better opening days and All-Star Games than the N.F.L. does. Ours stink.”-John Madden

“In Oakland, Al Davis was a genius. We had Ron Wolff there, too, and he was a genius. There was no room for me to be a genius.”-John Madden

“Nothing jazzes me up like a football. I’ve acquired more passion for years, not less. Not to love it wouldn’t make sense.”-John Madden

“I would never bet against Peyton Manning. You know about the age and the neck and the strength. But I had George Blanda, and as he got older, he got smarter, and he just got rid of the ball quicker. I watch Peyton, and I see George Blanda.”-John Madden

“I like to hear about what people do. That’s more interesting than talking about what the hell I do.”-John Madden

“There are so many kids who only know me from the video game. And they want to know if I’m home – and if I have a video game I can give them on Halloween. And sometimes they’re surprised to learn there actually is a ‘Madden.'”-John Madden

“Nobody, not even the head coach, would do anything to the football unilaterally, such as adjust the amount of pressure in a ball, without the quarterback not knowing. It would have to be the quarterback’s idea.”-John Madden

“Football isn’t nuclear physics, but it’s not so simple that you can make it simple. It takes some explaining to get it across.”-John Madden

“Justin Smith was one of the most underrated players in the NFL for what he did. He would sacrifice and do the dirty work, then someone else would clean up off it.”-John Madden

“Any time you get a new running back, whether it’s a rookie or hasn’t played a lot, that’s the first thing you test, is their pass protection. That’s big.”-John Madden

“Thursday night football is here to stay. So we’re looking at ways to make it safer. Now they’re playing division games, so you limit travel. Now the question is, should you play Sunday night before a Thursday night?”-John Madden

“A consulting position might work in another profession, but not in pro football. There’s no such thing. They give a guy a parking spot and put his name up as a consultant, and in six months, they erase the name.”-John Madden

“Sometimes you can be one of the best, but you don’t accept that if you don’t get the ring or win the Super Bowl. There’s a lot of good teams between the Super Bowl winner and other teams. Once the Super Bowl is over, we lump everyone into the other 31, and that’s not fair.”-John Madden

“I was in New York on September 11 when those planes hit the World Trade Center. At the time, it seemed like it was a local thing. But three or four days later, by the time we drove across the country on the bus, we realized it wasn’t a local thing. You could really feel the states become united. We became the United States of America.”-John Madden

“The quarterback has to get rid of the ball quickly, so there’s not a lot of time to make moves to gain separation.”-John Madden

“The thing that I always respected about Bruce Arians was when he was at Pittsburgh, he let Ben Roethlisberger decide what he liked. I used to do that. You can put something in and force-feed it to a quarterback. But if he doesn’t like it and have his heart in it, it’s not going to be as good as when he really likes something.”-John Madden

“Nobody, not even the head coach, would do anything to a football unilaterally, such as adjust the amount of pressure in a ball, without the quarterback not knowing. It would have to be the quarterback’s idea.”-John Madden

“There are so many kids who only know me from the video game.”-John Madden

“It’s a lot easier to get a suit than it is to get a coach.”-John Madden