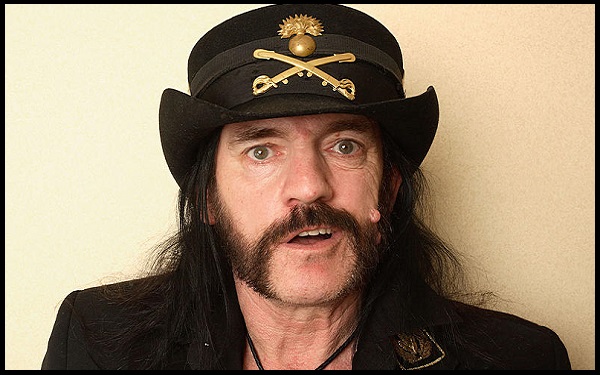 Lemmy Quotes:- Lemmy (24 December 1945 – 28 December 2015) was an English singer, songwriter, and musician. He is best remembered as the founder, lead singer, bassist, and primary songwriter of the heavy metal band Motörhead.

“It’s very much up to you, how you shape your life. I mean, I missed out on human relationships. But looking at relationships that I’ve seen along the way, I don’t think I’ve missed much.”-Lemmy 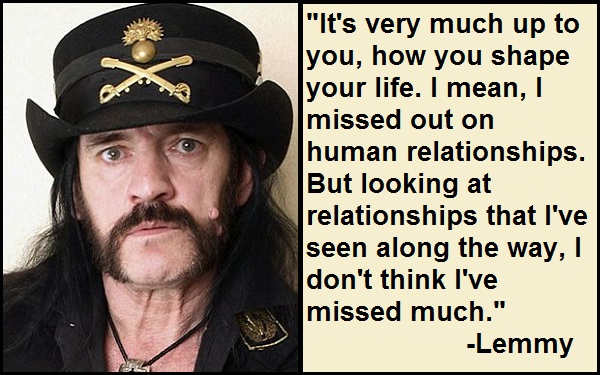 “Women always left me because I wouldn’t commit, but then nothing changes a relationship like commitment. If you move in with someone, you lose all respect for them.”-Lemmy

“I saw the Beatles play the Cavern in Liverpool when I was 16. They had the attitude: Onstage, they were like a four-headed monster.”-Lemmy

“Rock n’ roll sounded like music from another planet. The first time around, we had people like Elvis, Little Richard, Chuck Berry, Jerry Lee Lewis – all them people.”-Lemmy

“We were living in squats in Battersea when we started with Motorhead. And we lived with the Hell’s Angels in this flat. They were always around.”-Lemmy

“I can’t say I was really that surprised when the doctor told me I needed a defibrillator inserted in my chest. When you’ve lived the life that I have, you should always expect something like that to crop up. I was not a good boy.”-Lemmy

“My father walked out on us when I was three months old, and my mum, well, she wasn’t the driven sort.”-Lemmy

“Got two kids; one’s a record producer who lives just up the road from me – great guitarist and piano player, too.”-Lemmy

“I find it quite easy to play chords, and, you know, that was all I ever did. I never wanted to be a lead guitarist.”-Lemmy

“Everything I hear influences me. I can’t tell you all my influences as a musician.”-Lemmy

“I was in the Rockin’ Vicars, which was the first British band to tour behind the Iron Curtain. A lot of photos were taken of us next to milk churns.”-Lemmy

“People don’t become better when they’re dead; you just talk about them as if they are.”-Lemmy

“Everyone wants to be safe. Well, I got news for you: You can’t be safe. Life’s not safe. Your work isn’t safe. When you leave the house, it isn’t safe. The air you breathe isn’t going to be safe, not for very long. That’s why you have to enjoy the moment.”-Lemmy

“It just seems like we get more popular every eight years or so. For some reason, it becomes cool to like Motorhead again.”-Lemmy

“I don’t know, I’ve always written songs that are mainly about attitude, not me personally.”-Lemmy

“I always write about war, love, death, and injustice. There’s plenty of that around, so I never run out of ideas.”-Lemmy

“I don’t only collect Nazi stuff; I collect objects from all the Axis countries.”-Lemmy

“From the beginning of time, the bad guys always had the best uniforms. Napoleon, the Confederates, the Nazis.”-Lemmy

“In 1967, I had my first black girlfriend, and a lot more ever since then. I just don’t understand racism. I never thought it was an option.”-Lemmy

“The thing about death is it’s so final, isn’t it, really? As far as we know… Nobody has ever come back and told us about it.”-Lemmy

“The Beatles are the classical music of rock n’ roll. And rock n’ roll is far more widespread than classical will ever be.”-Lemmy

“I’ve never met a girl who could stop me looking at all the others. If I did, I’d marry her.”-Lemmy

“Kids are generally rotten until the age of about six when they become people.”-Lemmy

“I never liked jazz or anything else. Early rock n’ roll – that was music to me. Everything else was boring.”-Lemmy

“Eddie Cochran – I never got to see him live, but he could play. He and Buddy Holly were the best guitarists. They could get a good raunchy beat going.”-Lemmy

“Just ’cause something’s popular, it can still be good. In fact, if more people are buying it, then you must be doing something right. People look down on stuff that sells. What do you call that? Downward snobbery, I guess.”-Lemmy

“All my dreams came true. There are not many people that can say that. I mean, most people have to work in a job they hate all their lives, and I can’t imagine that.”-Lemmy

“It’s when you get to 60 when everything starts to go pear-shaped. Everyone thinks that becoming an older guy is easy, but you never consider it fully. It comes as quite a shock.”-Lemmy

“I dislike religion quite intensely. It’s been the cause of all the grief in the world ever since they discovered the first stone to worship.”-Lemmy

“Am I going to get my warts removed? I might do, but I’m certainly not going to auction them on the Internet.”-Lemmy

“I’m not afraid of death. How can you be afraid of something that’s inevitable?”-Lemmy

“We’ve made bad albums in the past, and people have bought them. I don’t know. I don’t care. I’m just grateful for it.”-Lemmy

“My advice wouldn’t be good for anybody. I don’t see it really being greeted with thunderous applause.”-Lemmy

“In every kid’s life, there are about three or four years when you’re at liberty, and after that, you have to get a job because you’re getting married or you have to support your parents or whatever it is. I was lucky: I didn’t get married, so I didn’t have to have that responsibility.”-Lemmy

“The hippie era was a wonderful time because we still believed we could make the world a better place.”-Lemmy