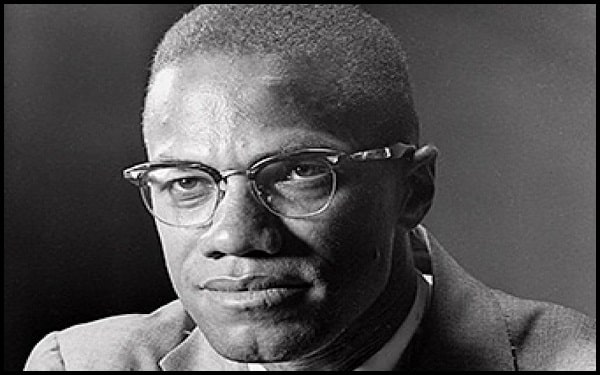 Malcolm X Quotes:- Malcolm X (May 19, 1925 – February 21, 1965) was an American Muslim minister and human rights activist who was a popular figure during the civil rights movement. He is best known for his staunch and controversial black racial advocacy, and for time spent as the vocal spokesperson of the Nation of Islam. 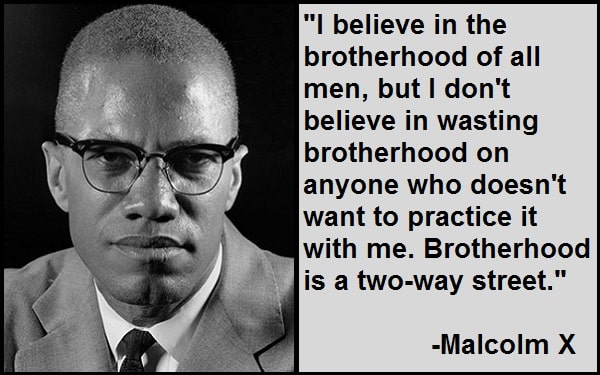 “My Alma mater was booked, a good library… I could spend the rest of my life reading, just satisfying my curiosity.”-Malcolm X

“You can’t separate peace from freedom because no one can be at peace unless he has his freedom.”-Malcolm X

“The media’s the most powerful entity on earth. They have the power to make the innocent guilty and to make the guilty innocent, and that’s power. Because they control the minds of the masses.”-Malcolm X

“In the past, the greatest weapon the white man has had has been his ability to divide and conquer. If I take my hand and slap you, you don’t even feel it. It might sting you because these digits are separated. But all I have to do to put you back in your place is bring those digits together.”-Malcolm X

“Power never takes a back step only in the face of more power.”-Malcolm X

“I don’t even call it violence when it’s in self-defense; I call it intelligence.”-Malcolm X

“If you’re not ready to die for it, but the word ‘freedom’ out of your vocabulary.”-Malcolm X

“I believe in human beings, and that all human beings should be respected as such, regardless of their color.”-Malcolm X

“Be peaceful, be courteous, obey the law, respect everyone; but if someone puts his hand on you, send him to the cemetery.”-Malcolm X

“You’re not supposed to be so blind with patriotism that you can’t face reality. Wrong is wrong, no matter who says it.”-Malcolm X

“I have more respect for a man who lets me know where he stands, even if he’s wrong than the one who comes up like an angel and is nothing but a devil.”-Malcolm X

“America is the first country… that can actually have a bloodless revolution.”-Malcolm X

“Power in defense of freedom is greater than power in behalf of tyranny and oppression, because power, real power, comes from our conviction which produces action, uncompromising action.”-Malcolm X

“I have been blessed to visit the Holy City of Mecca.”-Malcolm X

“Despite my firm convictions, I have always been a man who tries to face facts and to accept the reality of life as new experience and new knowledge unfolds. I have always kept an open mind, a flexibility that must go hand in hand with every form of the intelligent search for truth.”-Malcolm X

“What is a Dixiecrat? A Democrat. A Dixiecrat is nothing but a Democrat in disguise.”-Malcolm X

“We who follow the Honorable Elijah Muhammad feel that when you try and pass integration laws here in America, forcing white people to pretend that they are accepting black people, what you are doing is making white people act in a hypocritical way.”-Malcolm X

“The integration will not bring a man back from the grave.”-Malcolm X

“It’s hard for anyone intelligent to be nonviolent. Everything in the universe does something when you start playing with his life, except the American Negro. He lays down and says, ‘Beat me, daddy.'”-Malcolm X

“There is no more apartheid in South Africa than in the United States.”-Malcolm X

“In the Bible, God offered Pharaoh freedom if he would just let the oppressed people free to go to the land of milk and honey. But the Pharaoh disobeyed, and he was destroyed.”-Malcolm X

“In the Muslim world, I had seen that men with white complexions were more genuinely brotherly than anyone else had ever been. That… was the start of a radical alteration in my whole outlook about ‘white men.'”-Malcolm X

“All I held against Jews was that so many Jews actually were hypocrites in their claim to be friends of the American black man.”-Malcolm X

“The black man in Africa had mastered the arts and sciences. He knew the course of the stars in the universe before the man up in Europe knew that the earth wasn’t flat.”-Malcolm X

“I just don’t believe that when people are being unjustly oppressed that they should let someone else set rules for them by which they can come out from under that oppression.”-Malcolm X