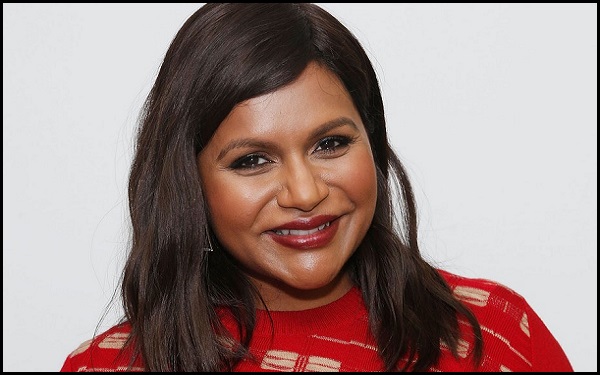 In addition to acting in it, she was a writer, executive producer, and director. For her work on the series, she received a Primetime Emmy Award nomination for Outstanding Writing in a Comedy Series in 2010.

“When people call me either a girl crush or their best friend, like, the best friend they want, that’s, to me, the best compliment anyone could ever give me.”-Mindy Kaling 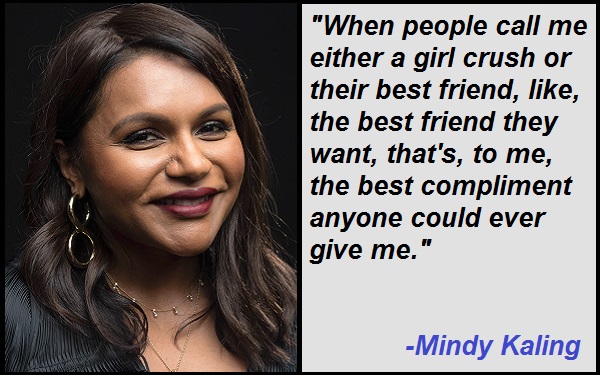 “There’s the psychotic ambitious side of myself that wants a fashion line and my own network and be like a combination of Oprah and Gwen Stefani. And have a perfume. Definitely a perfume.”-Mindy Kaling

“My dad’s whole family is in Madras and I was born in America so we didn’t have that big Indian community. I don’t really have anything interesting to say about it. When I talk about it people are like, ‘meh, let’s talk about something else.'”-Mindy Kaling

“I was obsessed with being popular in high school and never achieved it. There are photos from our high school musicals, and I’m comically in the deep background, wearing a beggar’s costume.”-Mindy Kaling

“We always think of a diet with a big groan. But I think diets are fun. I think it is an American pastime for a lot of women.”-Mindy Kaling

“As a kid, it’s adorable to have a gap in your teeth. But then, because of the shifting in my mouth, I started whistling through it, and as a 32-year-old woman, whistling while you speak in a sort of annoying.”-Mindy Kaling

“I love that ‘Much Ado About Nothing,’ passionate, smart fighting. I love fighting with guys, and that’s something that I don’t get to see: arguing at a high level with a member of the opposite sex. That didn’t really happen that much on ‘The Office.’ I just like that ‘Moonlighting,’ Benedick-Beatrice type of thing.”-Mindy Kaling

“I feel like the high-concept shows that have some kind of gimmick tend not to be the hit classic shows of all time.”-Mindy Kaling

“I am a super-confident writer, and as a joke writer and as an actress, I’m like, ‘I want to go head-to-head with every person.’ I am an Indian woman and I’m a kind of double minority in this world.”-Mindy Kaling

“My relationship with my mom is really the single most profound relationship that I’ve ever had in my life.”-Mindy Kaling

“If I could make a device where people could just intuit everything you are thinking – a little cable you plug into, like, a USB port, I would make a billion dollars.”-Mindy Kaling

“I never want to be called the funniest Indian female comedian that exists. I feel like I can go head-to-head with the best white, male comedy writers that are out there. Why would I want to self-categorize myself into a smaller group than I’m able to compete in?”-Mindy Kaling

“I have a great job writing for ‘The Office,’ but, really, all television writers do is the dream of one-day writing movies. I’ll put it this way: At the Oscars, the most famous person in the room is, like, Angelina Jolie. At the Emmys, the huge exciting celebrity is Bethenny Frankel. You get what I mean.”-Mindy Kaling

“I am always surprised at what movie studios think people will want to see. I’m even more surprised at how often they are correct.”-Mindy Kaling

“I regard romantic comedies as a subgenre of sci-fi, in which the world operates according to different rules than my regular human world.”-Mindy Kaling

“Right now, I’m hankering for new adventures… Ninety percent of the time I’m having romantic-comedy fantasies in which I’m wearing little pencil skirts and hurrying down to the subway.”-Mindy Kaling

“People don’t want to listen to a celebrity tweeting about their charities and shows. That’s why comedy writers do well – we put out little funny ideas.”-Mindy Kaling

“Fast food is hugely important in the life of a comedy writer. All we do is order in, and what we’re going to eat is hotly debated.”-Mindy Kaling

“Twitter is so short, it’s safe. I don’t want my bosses to be like, ‘Hey, your script is due and we saw you wrote four blog pages.'”-Mindy Kaling

“Sometimes I eavesdrop on people. I could rationalize it – oh, this is good anthropological research for characters I’m writing – but it’s basically just nosiness. It also helps me gauge where I’m at: Am I normal?”-Mindy Kaling

“I want a schedule-keeping, waking-up-early, wallet-carrying, picture-hanging man. I don’t care if he takes prescription drugs for cholesterol or hair loss.”-Mindy Kaling

“Comedy writers have the most fragile egos.”-Mindy Kaling

“Anybody can have a birthday. It requires nothing. Murderers have birthdays. It’s the opposite of anything that I believe in. And I don’t like at work where you stop everything to sing ‘Happy Birthday’ to someone. I feel like that’s for children.”-Mindy Kaling

“All I want to do is be a gay icon. I was reading Lady Gaga’s twitter because she has like 12 million followers or something like that. I feel like she has fans, gay, straight, bi, who would throw themselves off a building for her.”-Mindy Kaling

“I’m someone who loves romance. I always have loved it. Most people who grew up as nerds, as I was, surprisingly, have loved romance.”-Mindy Kaling

“On ‘The Office,’ so much of the show is about disguising your true feelings and your romantic feelings because it was a mock documentary.”-Mindy Kaling

“I hated L.A. for a long time, and I wanted to leave it. I had these fantasies of going to ‘SNL’ and falling in love with some writer on ‘SNL,’ of getting married and living in New York.”-Mindy Kaling

15+ Mindy Kaling Quotes That Will Inspire You

“Live performance really terrifies me. I haven’t done it, really, in years. I think that’s why I retired from my brief career in stand-up.”-Mindy Kaling

“It would be disingenuous of me to blanket-ly love everything a woman has produced simply to make a statement that we’re all in this together. No. We’re in Hollywood trying to be competitive, and get numbers, have our eyes on the Nielsens and things like that.”-Mindy Kaling

“Catharsis isn’t art. You can’t rely on catharsis to get a laugh. Because guess what? People do laugh when something’s shocking, but that is, to me, the absolute fakest of laughs. That’s not something that sustains a television series, or a movie, or even 45 minutes of a stand-up set at Caroline’s.”-Mindy Kaling

“As a kid, I always loved serialized books. It’s the reason why people love ‘Harry Potter.’ The serialization is amazing. It works on television. It works in film and it works in books. Especially when you’re a young kid, you get attached to these characters.”-Mindy Kaling

“Twitter is the most amazing medium for a comedy writer. I can’t get in every idea I want on the show no matter how hard I try to bully the other writers, so it’s a way of me getting out other comic ideas and immediately getting feedback.”-Mindy Kaling

Top 5 Mindy Kaling Quotes That Will Inspire You

“The Tweets that I have written that are most popular are the ones that are the kind of universal girly concerns and observations.”-Mindy Kaling

“I would love if gay men responded to me. All I want is for many gay men to dress up as me for Halloween.”-Mindy Kaling

“The funniest racism is the racism between minorities. It’s something you don’t see dramatized, but almost every minority I know who’s my age, they have these funny stories about their parents stereotyping other minorities.”-Mindy Kaling

“I have an underdog spirit in me, and now it feels weird to kind of get my own way more often than not.”-Mindy Kaling

“Anyone who’s lost someone to cancer will say this, that you have to struggle to try to remember the person before the diagnosis happened because they really do change – as anyone would change.”-Mindy Kaling

“I, like most women, I dress for other women, I think. If I was going to dress for men, I think in general I would be just wearing, like, a fitted black T-shirt and tight jeans every day.”-Mindy Kaling