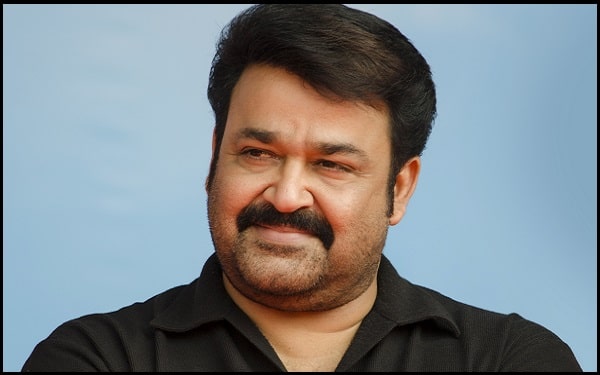 Mohanlal Quotes:- Mohanlal (born 21 May 1960) is an Indian actor, producer, playback singer, and distributor, who predominantly works in Malayalam cinema.

“All my success belongs to those who have contributed in my pursuit of art, ranging from writers and directors to makeup artists, lighting crew, etc.”-Mohanlal 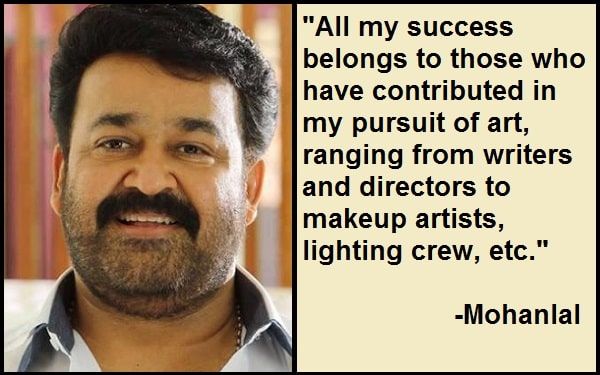 “I know it’s a craze in Bollywood to have six-pack abs, but here, it’s not the abs or the biceps that make us feel or look macho. Down south, the mustache still works for us!”-Mohanlal

“There was a time when not many people had access to Malayalam films. So those who did have access went on to copy the films, add a few bits, and present it like it was their own.”-Mohanlal

“In developed countries, strong rules are in place to restrict sound pollution and curb its deadly effects. As law-abiding citizens with social responsibility, we should all come together against this unhealthy trend.”-Mohanlal

“I have been writing my blog for several years. Whenever I have written about pertinent subjects, no one has supported them. For instance, the stray dog menace. I cycle in the morning every day, and I am still scared of stray dog attacks.”-Mohanlal

“It’s my right to write on what I feel about certain incidents, and it’s your choice whether to read it or not.”-Mohanlal

“You feel hurt when you hear things which you are supposed to have said, which you wouldn’t even have given a thought to.”-Mohanlal

“I have shot a lot of movies in Dubai.”-Mohanlal

“The thing about movies is that until it goes on the floors, it’s just preparations for the film.”-Mohanlal

“It’s not enough that you act in a movie – if it has to work, the audience should like it.”-Mohanlal

“Many talented actors have come into this industry and, in spite of their best efforts, haven’t been able to win over the audience.”-Mohanlal

“I studied, gained friends, became a father, faced the clipboard unexpectedly for the first time, earned some beautiful moments with family and buddies in Thiruvananthapuram.”-Mohanlal

“TV has the most reach among the audience. Movies are watched only by those who like cinema.”-Mohanlal

“The entertainment industry is humungous, and people have so many choices right now – they can watch web series, movies, stand-up comedies, and plays.”-Mohanlal

“Be it a cinema or TV, I have always been interested in taking up challenging projects.”-Mohanlal

“I love to take some holidays. In fact, I am a guy who wants to take a break for at least 10 days after each movie.”-Mohanlal

“Films are not meant to be watched only by fans but by everyone. Fans are those who like what we do. When we do things that only they like, then we are becoming their fans.”-Mohanlal

“If you ask me whether I can direct, I can. In fact, I have shot several songs, scenes, and stunts. When certain directors of my movies were not able to be there for some reason and had asked me to help out, I have directed. But to the helm, an entire movie is a different art altogether.”-Mohanlal

“Friendship is accepting a person with all their qualities – good and bad.”-Mohanlal

“Every actor or director has their ups and downs.”-Mohanlal

“In the Indian system of filmmaking, you don’t plan well in advance, stick to a storyboard, or deliver only the scripted lines.”-Mohanlal

“I have learned to take things as they come.”-Mohanlal

“I work or spend much of my time with the same friends who were with me right from my first movie.”-Mohanlal

“Destiny plays a very important role in my life.”-Mohanlal

“I was into movies before my graduation results got out. In fact, I was at the location of a movie when they came.”-Mohanlal

“Morality depends on individual freedom, and it requires some sense to know where to draw the line.”-Mohanlal

“India has a law. The political parties or the religious heads have no right to control that law.”-Mohanlal

“Sometimes, you fall into a ditch without knowing it is there, without seeing it, but you try to come out of it. If you fall again, you will jump out again.”-Mohanlal

“Life is a collage of events, really.”-Mohanlal

“Once the director calls for action, we act; we stop when he says ‘Cut.’ It is sort of like meditation – unknowingly, you are moving out of yourself, becoming someone else. That is why I consider acting a form of meditation.”-Mohanlal

“In most films, when we act, we don’t see such meanings in what we do. Rather, we don’t realize it. Only when we see it as a continuous film, later on, do we realize such deep meanings. That is the brilliance of the director.”-Mohanlal

“As an actor, we can only do what the director wants. Only the director has a vision of the entire film.”-Mohanlal

“You cannot judge the performance of an actor in isolation. A performance becomes good because of so many factors, including the other actors.”-Mohanlal

“I have never, ever argued about money with any of my producers because that is the kind of relationship and understanding I have with them.”-Mohanlal

“Even in Hollywood, filmmakers are re-creating classics at regular intervals.”-Mohanlal

“If you are a very ordinary human being, nothing affects you, nothing bothers you, and nothing troubles you. That’s how I live my life.”-Mohanlal

“I was not the producer of ‘Vaanaprastham’ earlier. The first producers backed out when they became doubtful about the monetary benefits. I do not blame them. But as an actor, I wanted to make the film. So, I told Shaji sir that I would produce the film. It was only then we started shooting.”-Mohanlal

“Priyadarshan has directed over 84 films and more than 150 ad films. With every film, he is growing. He knows his job well; he is thorough. His way of making a film and song or choreographing a scene is entirely different from other directors. He knows how to use an actor’s talent and how to handle an actor.”-Mohanlal

“There comes a turning point in the life of every person when he reflects on his journey and work and ponders on the next road to take. Is this the pinnacle, the ultimate? What next?”-Mohanlal

“Every actor, director, and producer wants all their films to do well. So you choose the role carefully, listen to the script, and work hard. But there is no way of predicting whether it will be a hit or a flop.”-Mohanlal

“When I started acting, I did many films without even an idea of what the script was about. The film would start, and then we would discover what we were expected to do on the sets. Those days have changed.”-Mohanlal

“When I have something to say or share with my viewers, I turn to my blog, and even then, I make it clear that it is my take on certain events.”-Mohanlal

“I want to do roles that no one else has ever done, which I know is difficult.”-Mohanlal

“Digitization has altered the nature of the film industry. Social media, especially, has become a decisive factor in determining a film’s box office success.”-Mohanlal