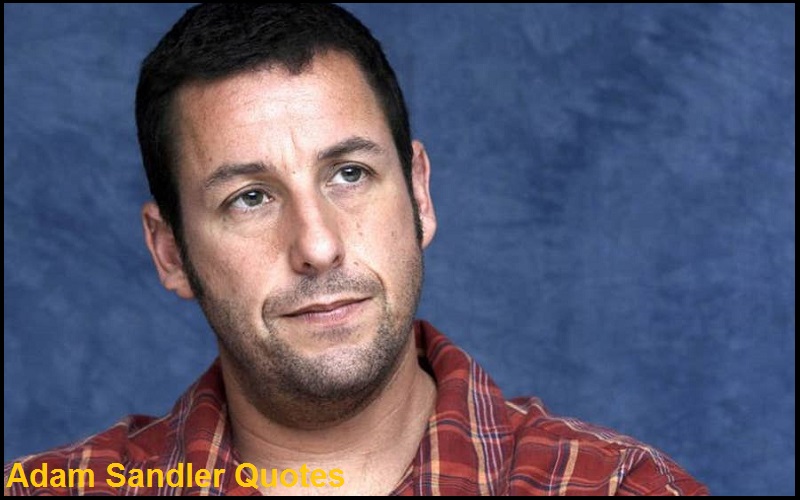 After becoming a Saturday Night Live cast member, Sandler went on to star in many Hollywood feature films that combined have grossed over $2 billion at the box office.

Some of his films, such as the widely panned Jack and Jill, have been heavily criticized, culminating in a shared second place in the number of Raspberry Awards and Raspberry Award nominations, in both cases second only to Sylvester Stallone.

“God gave me some weird, beautiful scent that makes men and women go crazy. People compare it to Carvel. It is a whale of a smell.”-Adam Sandler 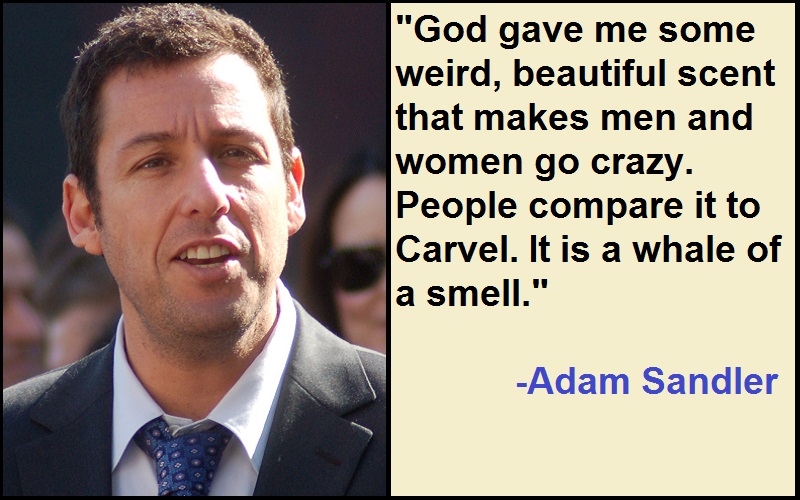 “Girls are soft and pretty.”-Adam Sandler

“I mean, I look at my dad. He was twenty when he started having a family, and he was always the coolest dad. He did everything for his kids, and he never made us feel like he was pressured. I know that it must be a great feeling to be a guy like that.”-Adam Sandler

“I definitely connected to the fact that life gets out of control and you end up doing things and wishing you were doing other things instead.”-Adam Sandler

“My movies just kind of sneak up on you. I don’t have to worry too much about what everybody is going to say. Anyway, I really don’t pay attention to what the world says about my movies. I just care about what my buddies think.”-Adam Sandler

“When you’re around the kids, you feel like you act the most grown-up just because you’re supposed to lead. I say things, like every other parent, that reminds you of your own parents. One thing I do know about being a parent, you understand why your father was in a bad mood a lot.”-Adam Sandler

“I think the reason I don’t read is that, when I’m reading, I feel like I’m missing out on something else. You know, What are my friends doing? Where’s my girlfriend?”-Adam Sandler

40+Adam Sandler Quotes That Will Make Your Day

“I had my moments of being humiliated, and then I had moments of doing something humiliating. I’m glad I lived out of both roles.”-Adam Sandler

“My comedy is different every time I do it. I don’t know what the hell I’m doing.”-Adam Sandler

“When I’m up there, and I know the show’s coming to a close, in my head I’m saying to myself, Oh man, you gotta get off and be a normal person again. That’s what I don’t like so much.”-Adam Sandler

“I’ve been called a moron since I was about four. My father called me a moron. My grandfather said I was a moron. And a lot of times when I’m driving, I hear I’m a moron. I like being a moron.”-Adam Sandler

“You know, when you don’t go on TV and talk about how many women you sleep with, some people in Hollywood, that are supposedly ‘in the know,’ start whispering that you’re gay. If I were gay, I wouldn’t be ashamed to admit it, but I’m not.”-Adam Sandler

“I grew up cursing a lot. It felt natural. My parents told me to stop.”-Adam Sandler

“My sisters are stronger and my brother’s bigger than me.”-Adam Sandler

“I prefer musicals because I am the best dancer who ever lived. The best plies, the best sashays, and by far the best-smelling Capezio’s.”-Adam Sandler

“When I take my kid to school, all the parents stop and stare.”-Adam Sandler

“Well I have a microphone and you don’t so you will listen to every damn word I have to say!”-Adam Sandler

“I know I want to always do the best I can.”-Adam Sandler

“With the amount of money I have, it’s difficult raising children the way I was raised.”-Adam Sandler

“I was raised by a mother who told me I was great every day of my life.”-Adam Sandler

“How do I speak Spanish? Not too well.”-Adam Sandler

“In one day, I have times where I’m feeling great, I feel like I love my life, and then 2:30 rolls around and I’m the angriest man alive. My wife sees it.”-Adam Sandler

“Sometimes you can’t prioritize family and you feel guilty.”-Adam Sandler

“I still get very scared when I step in front of a live audience.”-Adam Sandler

“Sixth grade was a big-time, in my childhood, of hoops and friendship, and coming up with funny things.”-Adam Sandler

“I can handle pain.”-Adam Sandler

“We just bought this house. It’s too big. It’s like 400,000 square feet or something. We got an indoor lake and ski slope in the house! It’s just too big.”-Adam Sandler

“I sang a song at my sister’s wedding. My mother forced me into that, too. But that one felt all right.”-Adam Sandler

“When I was younger and did a stand-up gig, it would take me two weeks to recover. Sometimes I’d get so panicked that I would stutter.”-Adam Sandler

“I sing seriously to my mom on the phone. To put her to sleep, I have to sing ‘Maria’ from West Side Story. When I hear her snoring, I hang up.”-Adam Sandler

“The problem with me, as far as getting married and having a family, is that my comedy is so important to me. So I don’t know if I’ll ever be as good a dad as my dad.”-Adam Sandler

“I shouldn’t be near Vegas and have money in my pocket.”-Adam Sandler

“Feels good to try, but playing a father, I’m getting a little older. I see now that I’m taking it more serious and I do want that lifestyle.”-Adam Sandler

“When I’m around the kids I feel like I act the most grown-up just because you’re supposed to. And I say things, like every other day, that reminds me of my own parents.”-Adam Sandler

“It definitely has to learn a lesson about the way you’re living your life. I wouldn’t compare our movie to that, but it has a structure where it’s about a man who doesn’t appreciate all that he has and finds out at the end that life has been great and he has to enjoy that.”-Adam Sandler

“Doing Saturday Night Live definitely affects my relationship with my girlfriend and with my family, because you feel so much pressure to do well that night. But I think everyone’s grown to accept that and so they give me my space at the show.”-Adam Sandler

“My grandmother used to embarrass me more when she would pick me up from school wearing a big fuzzy hat. I didn’t like that.”-Adam Sandler

“The Canteen Boy, the reason you feel bad for him and you can laugh is because he, and I guess a lot of my characters, they don’t notice they’re getting m”-Adam Sandler

“When I do stand-up shows at colleges, girls will talk to me after the show, and that always feels good. I like talking to them.”-Adam Sandler