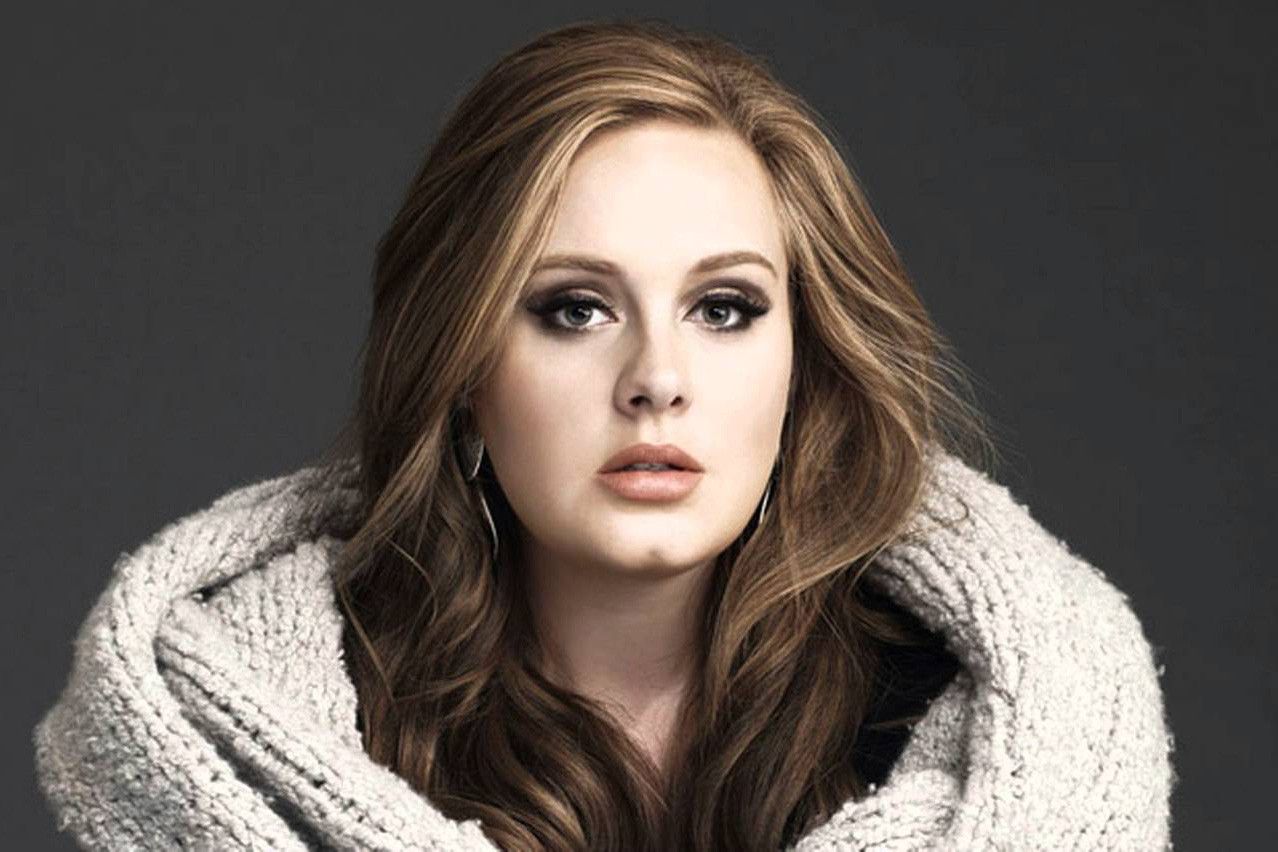 Adele Quotes:- Adele (born 5 May 1988) is an English singer-songwriter. After graduating from the BRIT School in 2006, Adele signed a recording contract with XL Recordings. In 2007, she received the Brit Awards Critics’ Choice award and won the BBC Sound of 2008 poll.

“Sometimes with pop music, you have to see it to love it. With soul music, it’s sparse. There’s nothing that’s pretentious or planned. It’s just so gutsy.”-Adele 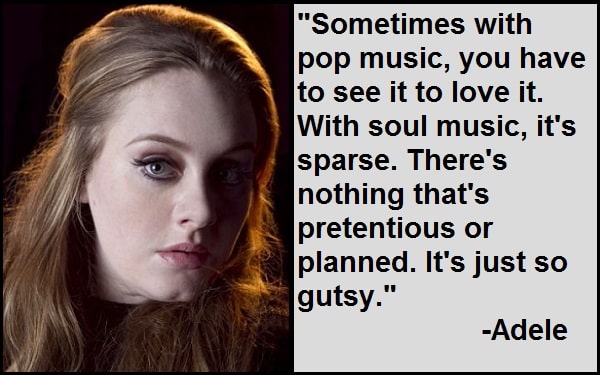 “In five years’ time, I’d like to be a mum. I want to settle down and have a family, definitely sooner rather than later. I’d like to have finished my second album too, maybe even my third. I’d like a sound that sticks around that other people are inspired by and that people know is me.”-Adele

“I love a bit of drama. That’s a bad thing. I can flip really quickly.”-Adele

“There will be no new music until it’s good enough and until I’m ready.”-Adele

“I can’t dance to save my life.”-Adele

“I’ve been singing properly every day since I was about fifteen or sixteen, and I have never had any problems with my voice, ever. I’ve had a sore throat here and there, had a cold and sung through it, but that day it just went while I was on stage in Paris during a radio show. It was literally like someone had pulled a curtain over it.”-Adele

“I’m really happy to be me, and I’d like to think people like me more because I’m happy with myself and not because I refuse to conform to anything.”-Adele

“The focus on my appearance has really surprised me. I’ve always been a size 14 to 16, I don’t care about clothes, I’d rather spend my money on cigarettes and booze.”-Adele

Most Inspiring Adele Quotes About Life

“If I am constantly working, my relationships fail. So at least now I can have enough time to write a happy record. And be in love and be happy. And then I don’t know what I’ll do. Get married. Have some kids. Plant a nice vegetable patch.”-Adele

“People think that I popped out of my mother’s womb singing ‘Chasing Pavements’.”-Adele

“It’s never been an issue for me – I don’t want to go on a diet, I don’t want to eat a Caesar salad with no dressing, why would I do that? I ain’t got time for this, just be happy and don’t be stupid. If I’ve got a boyfriend and he loves my body then I’m not worried.”-Adele

“I like looking nice, but I always put comfort over fashion. I don’t find thin girls attractive; be happy and healthy. I’ve never had a problem with the way I look. I’d rather have lunch with my friends than go to a gym.”-Adele

“There is nothing that would upset me more than my dad being bribed by the press. It’s like, ‘Just let them run it, then. Don’t you give them ammunition.'”-Adele

“I have never been insecure, ever, about how I look, about what I want to do with myself. My mum told me to only ever do things for myself, not for others.”-Adele

“I don’t write songs about a specific, elusive thing. I write about love, and everyone knows what it is like to have your heart broken.”-Adele

Notable Quotes By Adele That Give Valuable Life

“I’m scared of audiences. One show in Amsterdam I was so nervous, I escaped out of the fire exit. I’ve thrown up a couple of times. Once in Brussels, I projectile vomited on someone. I just gotta bear it. But I don’t like touring. I have anxiety attacks a lot.”-Adele

“People are starting to go on about my weight but I’m not going to change my size because they don’t like the way I look.”-Adele

“I like having my hair and face done, but I’m not going to lose weight because someone tells me to. I make music to be a musician not to be on the cover of Playboy.”-Adele

“Heartbreak can definitely give you a deeper sensibility for writing songs. I drew on a lot of heartbreak when I was writing my first album, I didn’t mean to but I just did.”-Adele

“I don’t really need to stand out, there’s room for everyone. Although I haven’t built a niche yet, I’m just writing love songs.”-Adele

“Mum loves me being famous! She is so excited and proud, as she had me so young and couldn’t support me, so I am living her dream, it’s sweeter for both of us. It’s her 40th birthday soon and I’m going to buy her 40 presents.”-Adele

“I’ve got some news… I’m delighted to announce that Simon and I are expecting our first child together. I wanted you to hear the news direct from me, obviously, we’re over the moon.”-Adele

“The way I write my songs is that I have to believe what I’m writing about, and that’s why they always end up being so personal – because the kind of artists I like, they convince me, they totally win me over straight away in that thing. Like, ‘Oh my God, this song is totally about me.'”-Adele

“It’s warts and all in my songs, and I think that’s why people can relate to them.”-Adele

“I doubt I’ll be singing forever, because at some point people aren’t going to want to hear my music, and I hope that I’ll still get the opportunity to write songs.”-Adele

“I wouldn’t be able to write a song like ‘Someone Like You’ and get someone else to sing it because it’s so personal. It’s like giving away your heart.”-Adele

“In the songs, I can still be really really direct but in interviews when I’m explaining my songs I shouldn’t be so direct about who they’re about.”-Adele

“My body doesn’t have any rhythm, you know. I’ve got a quite good rhythm when I’m singing but my feet are very much two left feet.”-Adele

“I was adopting an Ethiopian child, that’s not true. My house was haunted, that wasn’t true. God, there’s been so many rumors.”-Adele

“I can’t write another breakup record. That would be a real cliche.”-Adele

“Even if I did have, you know, a ‘Sports Illustrated’ body, I’d still wear elegant clothes.”-Adele

“I have insecurities of course, but I don’t hang out with anyone who points them out to me.”-Adele

“Crying is really bad for your vocal cords.”-Adele

“I’m nervous whenever I perform.”-Adele

“I am never writing a breakup record again, by the way. I’m done with being a bitter witch.”-Adele

“If I were a writer and not a singer in 10 years, I don’t know how I’d feel about writing really personal songs and getting someone else to sing them.”-Adele

“My life is full of drama, and I don’t have time to worry about something as petty as what I look like.”-Adele

“You have to prioritize what you stress about when you have a child.”-Adele

“My worst fear is my music won’t connect with the public.”-Adele

“I’m very confident. Even when I read people saying horrible stuff about my weight.”-Adele

“Americans are always mortified when I tell them this, but in England, it’s a tradition to put your plaques and photographs and awards and gold records and stuff in your bathroom. I don’t know why.”-Adele

“I think it’s shameful when you sell out. It depends on what kind of artist you wanna be, but I don’t want my name anywhere near another brand.”-Adele

“I don’t want to be in everyone’s face. I’m a big music fan, and I get really pissed off when it gets like that… and I don’t want people to get like that with me.”-Adele

“I will not do the festivals. The thought of an audience that big frightens the life out of me.”-Adele

“Sometimes my songs wander off a bit and are not always coherent.”-Adele

“I’d love to be an artist always, but if no one wants me, I’d love to write songs for other people, be a manager, nurture new talent.”-Adele

“I wanted to be a singer forever. But it’s not really my cup of tea. Having the whole world know who you are.”-Adele

“I find it quite difficult to think that there’s, you know, about 20 million people listening to my album that I wrote very selfishly to get over a breakup. I didn’t write it being that it’s going to be a hit.”-Adele

“It has gotten worse as I’m becoming more successful. My nerves. Just because there’s a bit more pressure, and people are expecting a lot more from me.”-Adele

“I was about to meet Beyonce, and I had a full-blown anxiety attack. Then she popped in looking gorgeous, and said, ‘You’re amazing! When I listen to you I feel like I’m listening to God.'”-Adele