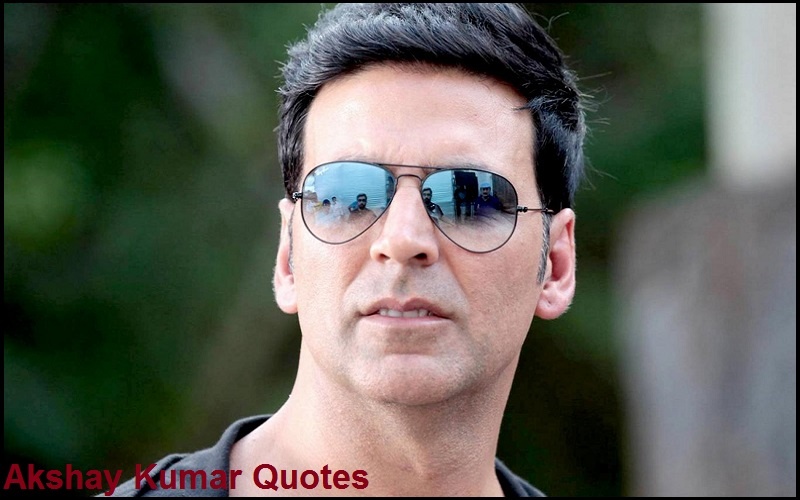 In a career spanning over 29 years, Kumar has appeared in over 100 films and has won several awards, including the National Film Award for Best Actor for his performance in Rustom, and two Filmfare Awards for Ajnabee and Garam Masala.

“It’s my goal to make martial arts compulsory for girls in school. In China, you have to do two years of martial arts training without which you cannot get a graduation degree.”-Akshay Kumar 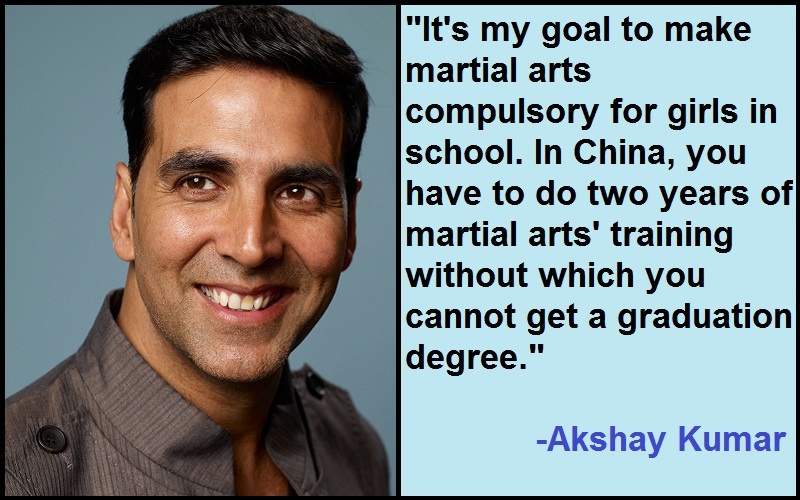 “I do not stick to rules when cooking. I rely on my imagination.”-Akshay Kumar

“Superstars come and go. I want to make sure I am always a producer’s actor. I may be refused to be called a great actor but I have never troubled any of my producers in my life. Honesty always catches the camera, and that is what my strength is.”-Akshay Kumar

“I’m not hungry for success. I am only hungry for good work, and that is how it is with most superstars. Every day I tell myself how fortunate I am to be where I am.”-Akshay Kumar

“Youth is a lifestyle; it’s not a blessing from God. If we treat our bodies as if they are not the most precious things we possess, then obviously we will show wear and tear. We’re like a good pair of jeans. If we take care of them, they’ll remain classic forever, but if we batter and abuse them they’ll look like tattered old rags.”-Akshay Kumar

“There’s absolutely nothing irrational about me; insane, yes, irrational, no. But my dumbest fear would be spinning in the magic teacups. Who the hell wants to pay to spin around like a bent yoyo for laughs?”-Akshay Kumar

Akshay Kumar Quotes About his Wife

“Why bother with Google when I have a wife who knows everything about everything!”-Akshay Kumar

“Work is work, but the family is for life. That’s what really matters to me.”-Akshay Kumar

“I have a great time cooking and eating Thai green chicken curry.”-Akshay Kumar

“I’m a realist. Where I come from, ‘phenomenons’ don’t exist. I’m from a land where people make mistakes and try again, harder, faster; where negativity is not an option.”-Akshay Kumar

“Journalists ask me all the time, ‘Akshay, do you believe in the numbers game?’ My standard response: ‘I can’t count, that’s why I have producers and accountants who calculate for me. As long as I have them in my life, I don’t need to worry about numbers!'”-Akshay Kumar

“I savor the adulation and love I have been getting from my fans and the blessings of elders in my family.”-Akshay Kumar

“I can cook because my life depended on it when I lived in Thailand. Either I learned cooking, or I learned how it felt to starve. I chose cooking.”-Akshay Kumar

“I have finally become a husband and I am genuinely enjoying every moment of it.”-Akshay Kumar

“It takes two hands to clap! I cannot be solely blamed for what happened in my relationships! If things soured, it happened because of both parties. Not just me!”-Akshay Kumar

“Always think twice before you decide to do anything for a film. It may seem like a career-changing idea but think of your family and your future before doing anything risky. Train properly, because looking strong and being strong are two different things.”-Akshay Kumar

“I’m glad that my films have been consistently faring well rather than one stray Friday!”-Akshay Kumar

“If you are in Bangkok, you will find that people there will never speak to you without joining their hands. It’s not that they are speaking to you like that because you are tourists. They even speak at their home like that.”-Akshay Kumar

“I’m glad that I’m being acclaimed as an actor. Today, when my hard work has paid off I can chill out about it.”-Akshay Kumar

“Playing a prisoner of war trapped in Pakistan for three years was a novelty for me. We made sure that we didn’t talk about India versus Pakistan but about the emotions of people on both sides and how terrorism affects us all.”-Akshay Kumar

“I’d never do a film that would hurt anyone’s sentiments, be it Indian or not.”-Akshay Kumar

“Controversies are a package deal in this industry. You just have to understand that and accept it.”-Akshay Kumar

“I’ll do at least one action film every year because of my fans. This is my promise to them.”-Akshay Kumar

“It feels wonderful to go back to the 1940s and recreate the whole era through my clothes, voice and body language. I am tired of playing the larger-than-life hero.”-Akshay Kumar

“I savor the adulation and love I have been getting from my fans and the blessings of elders in my family. Fourteen years have given me a lot and I can’t thank God and the industry enough.”-Akshay Kumar

“I have never believed in being part of any one group or camp.”-Akshay Kumar

“People want their actors to do comedy, too. They don’t want any comedians next to the actor. They want one solo hero and want to see everything in him.”-Akshay Kumar

“I once told someone I could act. They totally bought it. I’ve been getting away with it ever since.”-Akshay Kumar

“I see the friends I made over the years who have become family today, people I became acquainted with who have achieved so much in their lives. They taught me something about each meeting.”-Akshay Kumar

“I could break bricks with my hands when I was 12.”-Akshay Kumar

“It drives me nuts how I rely on my wife for everything. I can’t imagine a day without her!”-Akshay Kumar

“I never feel any pressure about a film. What is meant to happen will happen. I have seen failure as well as success several times.”-Akshay Kumar

“I enjoy the risk of bungee-jumping. I used to pay money to do it. Now, it’s the opposite. I get paid to do the action.”-Akshay Kumar

“I do not hold God ransom to my success; whatever is his will is my way. I stand by moments; I do not stand by time.”-Akshay Kumar

“For a guy who used to steal watches on the streets of Chandni Chowk for kicks, I surely think my success at the age of 22 was pretty early!”-Akshay Kumar

“I like working with south Indian directors because they are very disciplined. They visualize their entire story and screenplay in their heads even before they start shooting, which I respect. They finish their work on time. Being a disciplinarian myself, this suits my style.”-Akshay Kumar

“I have earned enough money in my life. When I started my career, for about 10 years, I told myself I want to make money. Now, I just want to do different roles.”-Akshay Kumar

“Ever since I started my career, I have been busy with four to five releases a year. I enjoy being busy.”-Akshay Kumar

“My love for sports will never die. I love martial arts and I want to promote it in whichever way I can. I am a fighter first, then an actor.”-Akshay Kumar

“I always check my harness before I do a stunt; I test-drive the cars I have to race or explode; I’m present at all pyrotechnical rehearsals, and I walk through everything step-by-step. No man should put their life in someone else’s hands unless they have covered their own safety from all angles.”-Akshay Kumar

“The day I take either my body or my work for granted will be the day you hear that I’ve smashed every inch of myself to pieces.”-Akshay Kumar

“I joined Khalsa College just opposite Don Bosco in class XI, but soon I quit studies and was sent to Bangkok by my father to learn martial arts, as that is the only place we could afford given that I would also work there to support my training.”-Akshay Kumar

“No one has got close enough to use or abuse me, and even if they did, I wouldn’t get too emotional about it. The only thing I ever get emotional about is my family. I am kind to everyone but I trust no one. That keeps me from getting hurt.”-Akshay Kumar