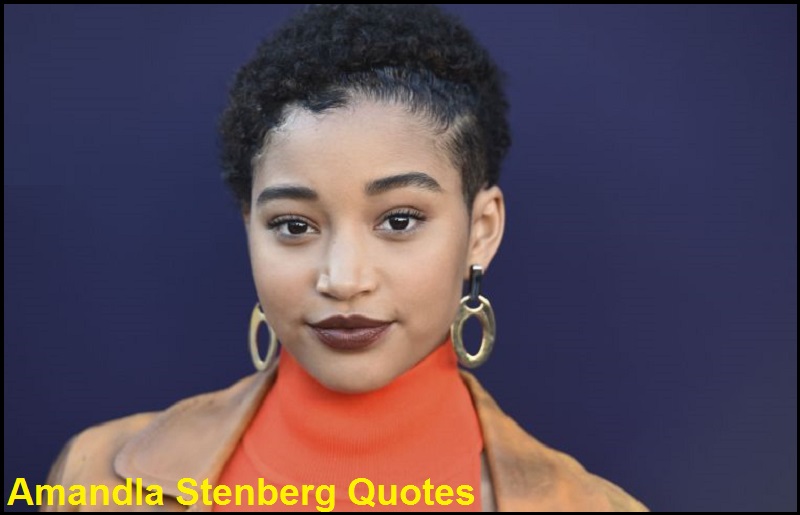 At the age of four, Stenberg started doing catalog modeling shoots for Disney. She has appeared in commercials for clients such as Boeing. In 2011, she appeared in her first feature film, Colombiana, as a younger version of Zoe Saldana’s character. 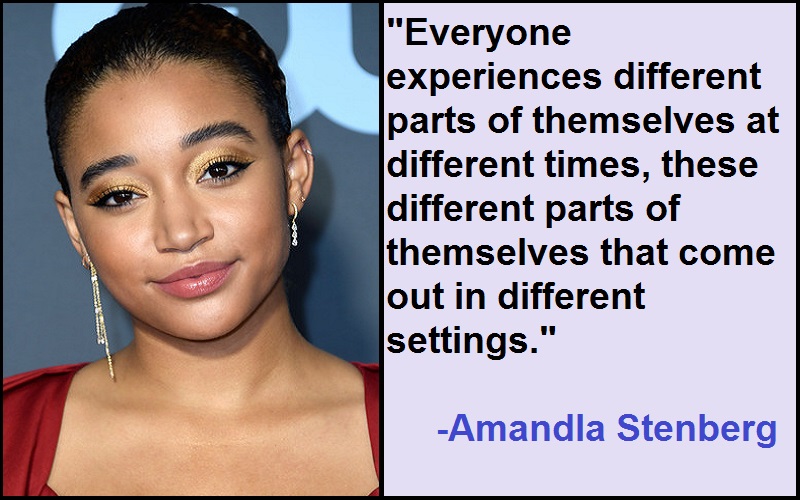 “I hope people online understand that the celebrity culture we’ve created is not really real. So when they’re speaking to and about me, I’m a person, so I’m going to make mistakes. It’s inevitable because I’m human.”-Amandla Stenberg

“I think something that’s really important to me is trying to do what I can from my position of power that comes with having a social media platform to dismantle certain systems that I think are really gross and harmful.”-Amandla Stenberg

“I’m just someone who cannot fake it. I can only do something with my full heart invested or just not do it at all.”-Amandla Stenberg

“There’s so much power in allegory, to form ideas and learn lessons that you can actually take and apply to real life. I think that’s why I originally really loved fantasy and reading.”-Amandla Stenberg

Best Amandla Stenberg Quotes That Will Inspire You

“As I started to explore my gender identity, I didn’t know how I could claim the title of ‘feminist’ without subscribing to the gender binary. I thought I had to be a proud woman to be a feminist. Then I came to the realization that I can be proud of women without necessarily identifying as one.“-Amandla Stenberg

“I think that, as a black girl, you grow up internalizing all these messages that say you shouldn’t accept your hair or your skin tone or your natural features or that you shouldn’t have a voice or that you aren’t smart.”-Amandla Stenberg

“I’m lucky because the most dangerous thing that could happen to me is that someone will say something mean on a computer screen miles away, and so I feel like if that’s all that I’m facing, then why would I not use my platform to talk about things?”-Amandla Stenberg

“I’ve read the ‘Mortal Instruments’ series; I was obsessed with those.”-Amandla Stenberg

“A Tree Grows in Brooklyn’ by Betty Smith is one of my favorites. Even though it doesn’t have any monsters or crazy fantasy in it, it’s such a raw story, and I can really relate to the characters. I think it’s a beautiful story.”-Amandla Stenberg

“I know when I used to chemically straighten mine, I did it because I wasn’t comfortable with my natural hair. I thought it was too poofy, too kinky. So for me, personally, when I started wearing it natural, it felt like I was blossoming because I was letting go of all the dead hair and all the parts of me that had rejected my natural state.”-Amandla Stenberg

“I come from a very musical family. My dad taught me to play guitar. I play the violin and drums as well. Violin, I started in elementary school. Drums actually came when I was in a program called ‘Rock Star,’ which was really awesome. We were doing a song by the Ramones, so I thought, ‘Why not play the drums?”-Amandla Stenberg

“I think ‘The Hunger Games’ has a really powerful message about survival and sacrificing for the ones you love. It’s almost like a warning for us to not lose touch of our humanity. We live in a world in which we watch other’s misfortunes for entertainment.”-Amandla Stenberg

“My mom reminds me that all things are possible.”-Amandla Stenberg

“Within months after reading the novel ‘The Hunger Games,’ I went from telling my mom that I could see myself as this character to actually getting the role. My mother reminds me that if I could manifest such an important role just because I wanted it so much, all of my dreams are possible.”-Amandla Stenberg

“Growing up, I was always super into fantasy and ‘The Lord of the Rings and ‘Game of Thrones and all of that, but I could never find black characters whom I really liked.”-Amandla Stenberg

“You don’t have to force your career to happen all at once.”-Amandla Stenberg

“I really love my hair. I really embrace it, and I’m so glad that I made the decision to wear it natural.”-Amandla Stenberg

“I’m really passionate about representation in film. I feel like the world is dominated by such a small group of human beings. There are so many different kinds of people that aren’t represented, that don’t have characters who look like them.”-Amandla Stenberg