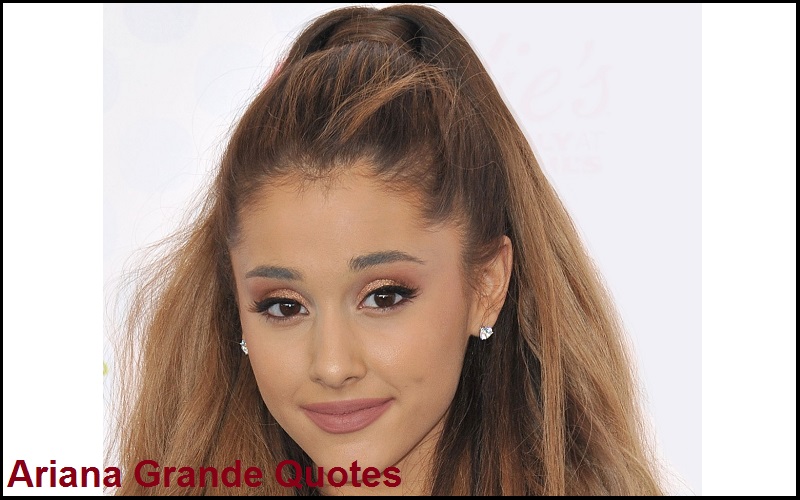 Ariana Grande Quotes:- Ariana Grande (born June 26, 1993) is an American singer, songwriter, and actress. A multi-platinum, Grammy Award-winning recording artist, she is known for her wide vocal range, which critics have often compared to that of Mariah Carey.

Born in Boca Raton, Florida, Grande began her career in 2008 in the Broadway musical. She rose to prominence for her role as Cat Valentine in the Nickelodeon television series, Victorious and in its spin-off, Sam & Cat.

“I want to be a recording artist for my whole entire life. But Broadway is something I would come back to at any given moment. I love, love, love doing theater.”-Ariana Grande 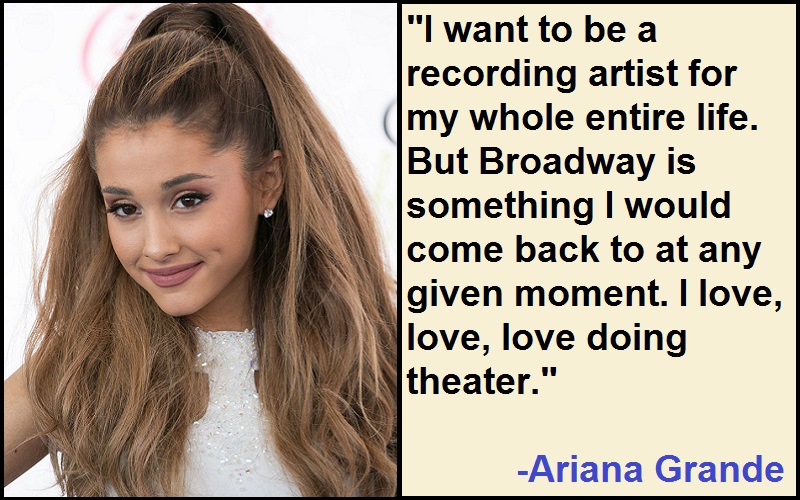 “The best fashion advice I’d say would be just to do what makes you comfortable and what makes you feel cute, and that’s how you’re gonna look your best ’cause when you feel your best, everybody else can feel it, too.”-Ariana Grande

“Sometimes, people can be extraordinarily judgmental and closed-minded to anyone different or special, which is why it’s so hard for young people in this day and age to be comfortable enough in their own skin to not listen to the people picking on them.”-Ariana Grande

“I think it’s so important for girls to love themselves and to treat their bodies respectfully.”-Ariana Grande

“If anything, we should feel sorry for the people who want us to feel bad about ourselves because they are the ones struggling for approval. In middle school, bullies tortured other kids because they thought it would make people like them more.”-Ariana Grande

“Be happy with being you. Love your flaws. Own your quirks. And know that you are just as perfect as anyone else, exactly as you are.”-Ariana Grande

“I met India Arie, who is one of my favorite artists of all time. It was really sweet; I was broken up with a month before, and she stayed up texting me all night and was helping me through it. Her text message looks like a song of hers. She’s sort of becoming my fairy godmother.”-Ariana Grande

“I always knew that St. Jude was an amazing organization but meeting the kids and seeing how the hospital works first hand was truly beautiful. It doesn’t feel like a regular hospital all dreary and sad. It’s a colorful, beautiful, comfortable, fun place to live and the energy is wonderful.”-Ariana Grande

“I don’t feel much pressure to fit in. I never have. I’ve always just wanted to do my thing. I have really good friends and good family, and if I don’t fit in somewhere else, I fit in at home.”-Ariana Grande

“I love nerdy, cute, quirky boys who don’t take themselves too seriously.”-Ariana Grande

“I like either skinny jeans or ripped, casual, super-sloppy boyfriend jeans. A lot of ripped jeans. They are so early 2000, but they are so cute, I love them. I love surfer jeans, too!”-Ariana Grande

“I like Aurora, ‘Sleeping Beauty,’ because she’s just sleeping and looking pretty and waiting for boys to come to kiss her. Sounds like a good life – lots of naps and cute boys fighting dragons to come to kiss you.”-Ariana Grande

“I jog up to the Hollywood sign every weekend. It’s fun and what a view!”-Ariana Grande

“One of the most terrible feelings in the world is knowing that someone else doesn’t like you. Especially when you don’t know what you’ve done to deserve it.”-Ariana Grande

“I feel like when I try to fit in, it comes across as not genuine, and that is not good. I’d rather just do me and have people say, ‘Oh. That’s interesting,’ then try to fit in.”-Ariana Grande

“Every day, my mom and I would watch a different Judy Garland VHS. I love how she tells a story when she sings. It was just about her voice and the words she was singing – no strings attached or silly hair or costumes, just a woman singing her heart out. I feel like that doesn’t happen that much anymore.”-Ariana Grande

“Dancing in high heels is kind of tough. I learn the dances without the heels, and then we add them. We just practice, and I get used to it. My feet hurt really badly at the end of the shows, but it’s fun. While it’s happening it’s fun. I feel tall.”-Ariana Grande

“I’m pretty sure my house in Florida is haunted! He’s a nice ghost though.”-Ariana Grande

“My performance outfits are very Marie Antoinette, sparkly corsets… and full skirts. And then we do another look that’s ’50s-inspired. Poufy skirts, big bows. Very fun, girlie and young, but otherwise, when I’m not in costume, I dress really normal.”-Ariana Grande

“I worked with someone who told me they’d never like me. But for some reason, I just felt like I needed her approval. So I started changing myself to please her. It made me stop being social and friendly. I was so unhappy.”-Ariana Grande

“I love ripped jeans! They are flattering. I’m very petite, so I think they make my butt look lovely.”-Ariana Grande

“Don’t ever doubt yourselves or waste a second of your life. It’s too short, and you’re too special.”-Ariana Grande

“I’ve done the bad-boy thing. It was fun for a good three months. But the thing about bad boys is, you have to keep in mind, you’re never gonna marry a bad boy.”-Ariana Grande

“I grew up writing songs in my room on GarageBand, and I would make the beats just out of layering my vocals over and over again. Very Imogen Heap-inspired.”-Ariana Grande

“To be honest, I never really considered myself to be too much of an actress. So, whenever I get the chance to do music, I’m always, like, just in it. It’s like, ‘Oh my God, I finally get to do this. I’m so happy.'”-Ariana Grande

“I’ve dreamed of doing music since I was three or four years old.”-Ariana Grande

“All I have to say is basically if performing, singing, acting, and dancing is what you want to do, then you just have to do it – no matter where it is.”-Ariana Grande

“I’m so thankful for the Internet because actors and singers and performers now have a way to connect with their fans on a very personal level which I think is quite special.”-Ariana Grande

“I’m not going to do anything crazy, but I want to do music that I’m passionate about. I’m finally at an age where I can do the music that I grew up loving, which was urban pop, ’90s music. I grew up listening to the divas, so I’m very happy to finally do urban pop. I hope that it’s received well, and it has been so far.”-Ariana Grande

“I have a garden in my backyard that’s completely organic, which I’m very proud of.”-Ariana Grande

“I just love to shop. If I could, I would shop every single day in every single store and spend all of my money which, you know, I do anyway.”-Ariana Grande

“I love, love, love just being hands-on at all times in the studio.”-Ariana Grande

“I did stand-up for my grandparents every day when I was, like, eight.”-Ariana Grande

“I’m a big perfectionist! I’m trying to channel super-confident women like Alicia Keys, Mariah Carey, and Beyonce because I realized that if you want something, you really have to go for it, just like they do.”-Ariana Grande

“People tend to think that because I’m a performer and I don’t go to a regular high school that I haven’t personally been affected by bullies. But it’s actually quite the contrary.”-Ariana Grande

“Mariah and Whitney Houston were my goddesses growing up.”-Ariana Grande

“Meditation is a great way to keep my body well-centered while juggling shooting schedules and recording sessions.”-Ariana Grande

“But as far as dream roles – I know this is so expected of me, but I would like to play Elphaba in ‘Wicked’ on Broadway. I have a lot of dream roles, but that’s like my main one because of the vocal track. I love belting high things!”-Ariana Grande

“I can’t stress to you enough how much I can relate to teens being cyberbullied. Something that helps me is looking at old videos of me and my friends from middle school or videos of my family. I love watching funny videos of my favorite people – it really cheers me up.”-Ariana Grande