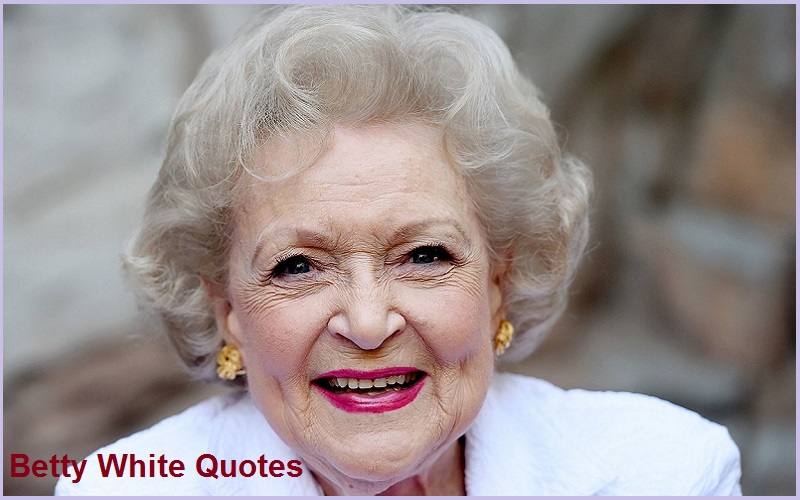 Betty White Quotes:- Betty White (born January 17, 1922) is an American actress and comedian, with the longest television career of any entertainer, spanning 80 years. Regarded as a pioneer of television.

She is one of the first women to have controlled both in front of and behind the camera and is recognized as the first woman to produce a sitcom (Life with Elizabeth), which contributed to her receiving the honorary title Mayor of Hollywood in 1955.

“It’s your outlook on life that counts. If you take yourself lightly and don’t take yourself too seriously, pretty soon you can find the humor in our everyday lives. And sometimes it can be a lifesaver.”-Betty White 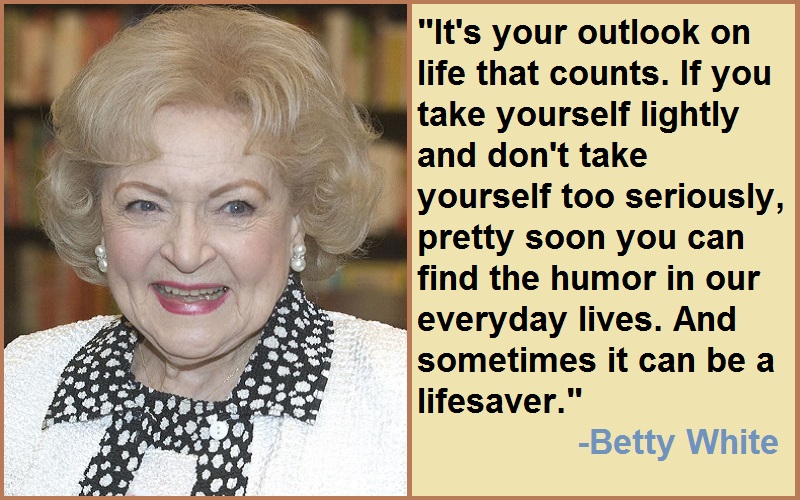 “A lady likes to be complimented on her looks, her eyes, her figure. But the personality comments are much appreciated.”-Betty White

“I have a two-story house and a bad memory, so I’m up and down those stairs all the time. That’s my exercise.”-Betty White

“I love words. Sudoku I don’t get into, I’m not into numbers that much, and there are people who are hooked on that. But crossword puzzles, I just can’t – if I get a puppy and I paper train him and I put the – if all of a sudden I’d open the paper and there’s a crossword puzzle – ‘No, no, you can’t go on that, honey. I’ll take it.”-Betty White

“Retirement is not in my vocabulary. They aren’t going to get rid of me that way.”-Betty White

“A lot of people think this is a goodie-two-shoes talking. But we do have a tendency to complain rather than celebrating who we are. I learned at my mother’s knee it’s better to appreciate what’s happening… I think we kind of talk ourselves into the negative sometimes.”-Betty White

“Wendy Malick and Valerie Bertinelli make fun of me, but I take care of my health – I don’t abuse it.”-Betty White

“Hot dogs and Red Vines and potato chips and French fries are my favorite foods.”-Betty White

“Animal lover that I am, a cougar I am not.”-Betty White

“It’s been phenomenal, but everybody keeps congratulating me on my resurgence and my big comeback. I haven’t been away, guys. I’ve been working steadily for the last 63 years.”-Betty White

“It’s a little known fact that one in three family pets gets lost during its lifetime, and approximately 9 million pets enter shelters each year. That’s why it’s a wonderful thing to get your pet microchipped and registered with your contact information because then they can be located and the owners can track where their pets are.”-Betty White

“Why retire from something if you’re loving it so much and enjoying it so much, and you’re blessed with another group of people to work with like the gang on ‘Hot in Cleveland?’ Why would I think of retiring? What would I do with myself?”-Betty White

“I think older women still have a full life.”-Betty White

“When I pontificate, it sounds so, you know, Oh, well, she’s preaching. I’m not preaching, but I think maybe I learned it from my animal friends. Kindness and consideration of somebody besides yourself. I think that keeps you feeling young. I really do.”-Betty White

“I have the backbone of an eel.”-Betty White

“The bottom line is, I’m blessed with good health. On top of that, I don’t go around thinking ‘Oh, I’m 90, I better do this or I better do that.’ I’m just Betty. I’m the same Betty that I’ve always been. Take it or leave it.”-Betty White

“I was one of the first women producers in Hollywood.”-Betty White

“I’ve worked with Morris Animal Foundation for more than 40 years now, and I’m so proud of all they’ve done to advance veterinary medicine for animals worldwide.”-Betty White

“Doing drama is, in a sense, easier. In doing comedy, if you don’t get that laugh, there’s something wrong.”-Betty White

“I think that a show that is as successful as ‘The Golden Girls’ is a once-in-a-lifetime thing. If you don’t feel proud to be part of a show that has that kind of track record, then shame on you, because that’s a privilege.”-Betty White

“When we started in television, there was that magic box in the corner of the room, and ‘Oh my gosh – look what it’s doing!”-Betty White

“Long ago, I did a five-and-a-half-hour-a-day, six-day-a-week talk show for four years, early on, in Los Angeles – local show. And when you are on that many hours with no script, you know, you get very comfortable, maybe overly comfortable with that small audience.”-Betty White