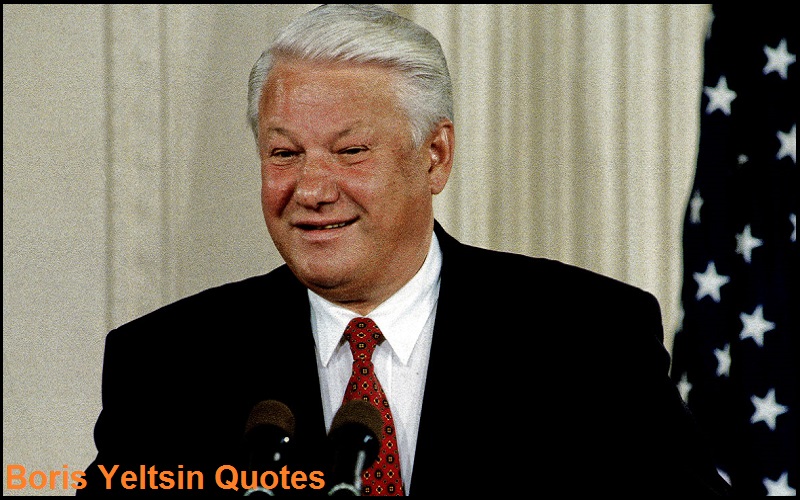 Boris Yeltsin Quotes:- Boris Yeltsin (born 1 February 1931 – 23 April 2007) was a Soviet and Russian politician who served as the first President of the Russian Federation from 1991 to 1999.

A member of the Communist Party of the Soviet Union from 1961 to 1990, he later stood as a political independent, during which time he was ideologically aligned with liberalism and Russian nationalism.

“I understand that it’s hard for everyone, but one cannot give in to emotions… we’ll have to draw lessons from the current crisis and now we’ll have to work on overcoming it.”-Boris Yeltsin 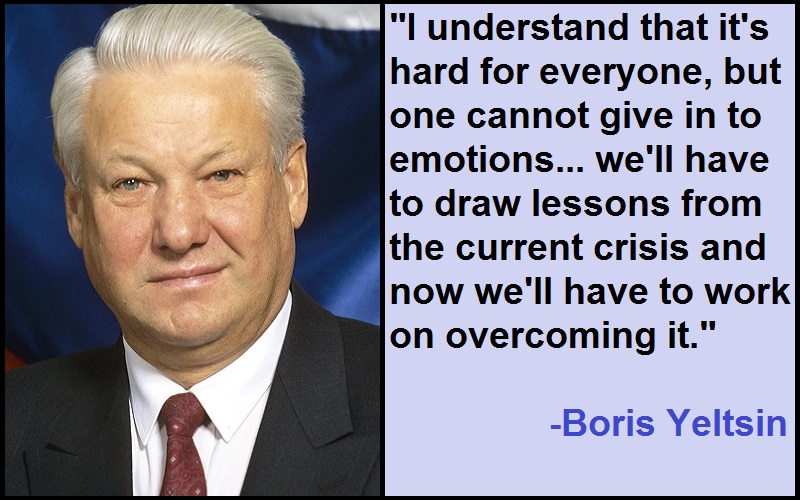 “You can build a throne with bayonets, but you can’t sit on it for long.“-Boris Yeltsin

“Let’s not talk about Communism. Communism was just an idea, just pie in the sky.”-Boris Yeltsin

“We don’t appreciate what we have until it’s gone. Freedom is like that. It’s like air. When you have it, you don’t notice it.”-Boris Yeltsin

“A man must live like a great brilliant flame and burn as brightly as he can. In the end, he burns out. But this is far better than a mean little flame.”-Boris Yeltsin

“International terrorism is throwing down a challenge, and not just to Russia.”-Boris Yeltsin

“I refer to calls for humanitarian intervention in the affairs of another state – a new idea, this – even when they are made under the pretext of defending human rights and freedoms.”-Boris Yeltsin

“Russia also declared its independence. This was approved by the Supreme Soviet, and you know and remember that there was the Declaration on the Independence of Russia.”-Boris Yeltsin

“One could see that what you are writing was that today’s meeting with President Bill Clinton was going to be a disaster. Now, for the first time, I can tell you that you are a disaster.”-Boris Yeltsin

“There are numerous bugbears in the profession of a politician. First, ordinary life suffers. Second, there are many temptations to ruin you and those around you. And I suppose third, and this is rarely discussed, people at the top generally have no friends.”-Boris Yeltsin

“While maintaining our nuclear potential at the proper level, we need to devote more attention to developing the entire range of means of information warfare.”-Boris Yeltsin

“Your commanders have ordered you to storm the White House and to arrest me. But I as the elected President of Russia give you the order to turn your tanks and not to fight against your own people.”-Boris Yeltsin

“We all have an equal interest in stability and security throughout Europe. The years the OSCE has existed, and particularly this year, have given rise to great expectations and at the same time to powerful disappointments.”-Boris Yeltsin

“Europe has found itself confronted with fresh challenges – challenges of a global character, the nature of which is directly connected with changes in the international climate and the difficulties of seeking new models for co-operation.”-Boris Yeltsin

“You have no right to criticize Russia over Chechnya.”-Boris Yeltsin

“Thousands of mercenaries, who have trained in camps on the territory of Chechnya as well as come in from abroad, are actually preparing to impose extremist ideas on the whole world.”-Boris Yeltsin

“We are well aware of which countries and through which countries the terrorists are receiving support. In the immediate future, I shall be calling upon the leaders of these states to put a stop to this kind of activity.”-Boris Yeltsin

“I would like to stress here that lasting peace in the Chechen republic and so-called peace talks with the bandits are not the same things, and I would ask everyone to make no mistake about that.”-Boris Yeltsin

“We want peace and a political solution to the situation in Chechnya.”-Boris Yeltsin

“There were no strategic mistakes that could affect Russia’s history and its further development. No, there were no such mistakes. Tactical errors were made in some less significant options, problems, and so on. But, on the whole, Russia embarked on a correct path and it changed.”-Boris Yeltsin