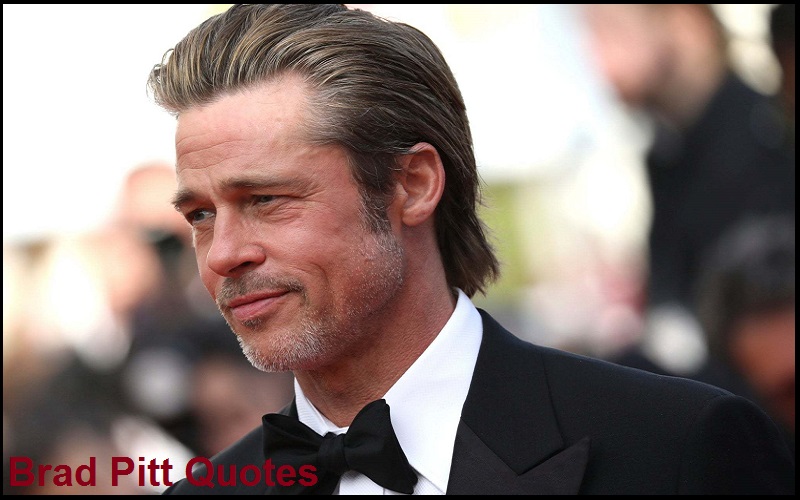 Brad Pitt Quotes:- William Bradley Pitt (born December 18, 1963) is an American actor and film producer. He has received multiple awards and nominations including an Academy Award as producer under his own company, Plan B Entertainment.

Pitt first gained recognition as a cowboy hitchhiker in the road movie Thelma & Louise (1991). His first leading roles in big-budget productions came with the drama films A River Runs Through It and Legends of the Fall and horror film Interview with the Vampire.

He gave critically acclaimed performances in the crime thriller Seven and the science fiction film 12 Monkeys (both 1995), the latter earning him a Golden Globe Award for Best Supporting Actor and an Academy Award nomination.

“Man, when I’m riding with the helmet on, I’m invisible. And people just deal with me as the guy on the bike… it gives you a chance to read ’em.”-Brad Pitt 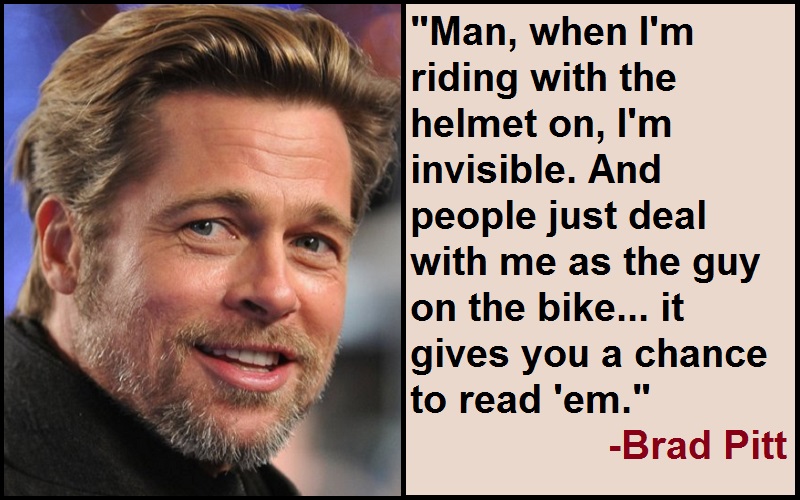 “When you see a person, do you just concentrate on their looks? It’s just a first impression. Then there’s someone who doesn’t catch your eye immediately, but you talk to them and they become the most beautiful thing in the world. The greatest actors aren’t what you would call beautiful sex symbols.”-Brad Pitt

“I always liked those moments of epiphany, when you have the next destination.”-Brad Pitt

“My happiest moment is the day they call wrap and I’m free. I’m not looking back.”-Brad Pitt

“It’s a lovely experience walking around a museum by yourself.”-Brad Pitt

“You must lose everything in order to gain anything.”-Brad Pitt

“You can’t be different for different’s sake, and this doesn’t always work, but you have to separate yourself from the normal read. Of course, it has to be truthful. If it’s not truthful, don’t waste your time.”-Brad Pitt

“I’m a bit of a loner, you know? I’m quieter by nature. And coming from, you know, hillbilly country, I’m probably more reserved.”-Brad Pitt

“My happiest moment is the day they call wrap and I’m free. I’m not looking back.”-Brad Pitt

“I have very few friends. I have a handful of close friends, and I have my family, and I haven’t known life to be any happier.”-Brad Pitt

“When I was a boy, I would ask about my family history, about my bloodlines. We really didn’t know that much. We had a little Indian in us from the Oklahoma Trail of Tears.”-Brad Pitt

“Perhaps we don’t need these religious concoctions to pillow the fear of death. Just the fact that there is an unknown, and something greater, can bring a feeling of peace. That’s enough for me.”-Brad Pitt

“My kids are just waiting for me at home. I’m their father. They’re wondering, ‘When’s Daddy coming home?”-Brad Pitt

“I’ve been no stranger to change.”-Brad Pitt

“In Missouri, where I come from, we don’t talk about what we do – we just do it. If we talk about it, it’s seen as bragging.”-Brad Pitt

“Heartthrobs are a dime a dozen.”-Brad Pitt

“I start asking a lot of questions about my own life, and it’s not necessarily fun, but it’s a good exercise.”-Brad Pitt

“The latitude and longitudinal lines of where you are born to determine your opportunity in life, and it’s not equal. We may have been created equal, but we’re not born equal. It’s a lot to do with luck and you have to pass that on.”-Brad Pitt

“When I was a boy, I would ask about my family history, about my bloodlines. We really didn’t know that much. We had a little Indian in us from the Oklahoma Trail of Tears.”-Brad Pitt

“I phoned my grandparents and my grandfather said ‘We saw your movie.’ ‘Which one?’ I said. He shouted ‘Betty, what was the name of that movie I didn’t like?”-Brad Pitt

“When I was a little kid we moved to Tulsa, then to St. Louis, and by the time I was in kindergarten, we lived in Springfield, Missouri. There I basically grew up.”-Brad Pitt

“Listen, I’ve been pretty fortunate. And if I’ve been underrated, it’s actually been something I’ve been able to work with; I can surprise people. It sets me up to exceed expectations, so I don’t mind.”-Brad Pitt

“Success is a beast. And it actually puts the emphasis on the wrong thing. You get away with more instead of looking within.”-Brad Pitt

“I grew up in Oklahoma and Missouri, and I just loved film. My folks would take us to the drive-in on summer nights, and we’d sit on the hood of the car. I just had this profound love for storytelling.”-Brad Pitt

“When I first started, they were trying to get me into sitcoms – I think because I had that kind of Wonder Bread look and my hair always went into place. I kept saying, ‘I’m not good at sitcoms. I don’t know how to do that.”-Brad Pitt

“I know when I go outside, there’ll be a van or two and they’ll probably follow us four out of seven days a week, trying to get something. But I’m just going across town and I know they’re just wasting their day, so it doesn’t bother me anymore.”-Brad Pitt

“I would say that the directors that I’ve liked the most are all curious in nature – curious thinkers. They’re all big questioners, I would say, first and foremost.”-Brad Pitt

“I’m most comfortable with the Southern dialects, really. It’s easy, for example, for me to do Irish because we’ve got Irish heritage where I come from.”-Brad Pitt

“That’s the most important thing to me – that if I’m gonna spend however long it takes to make a movie, give up 14 hours a day for however many weeks or months, then it’s very important for me to know that I’m working with people who I respect and enjoy and that we’re going for something together.”-Brad Pitt