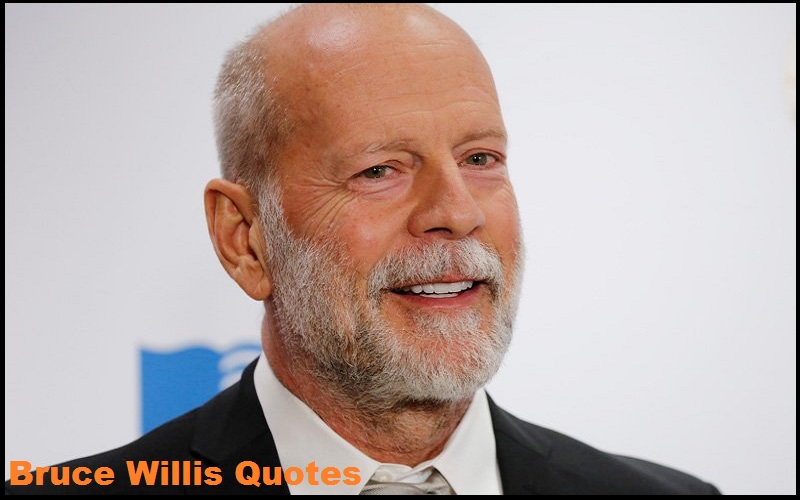 Share Tweet Pin it Email WhatsApp
Bruce Willis Quotes:- Bruce Willis (born March 19, 1955) is an American actor, producer, and singer. Born to a German mother and an American father in Idar-Oberstein, Germany, he moved to the United States with his family in 1957.
His career began on the Off-Broadway stage in the 1970s. He later achieved fame with his leading role on the hit television series Moonlighting (1985–89).
He has since appeared in over 70 films and is widely regarded as an “action hero”, due to his portrayal of John McClane in the Die Hard franchise (1988–2013), and other such roles.

“I’ve always had confidence. Before I was famous, that confidence got me into trouble. After I got famous, it just got me into more trouble.”-Bruce Willis 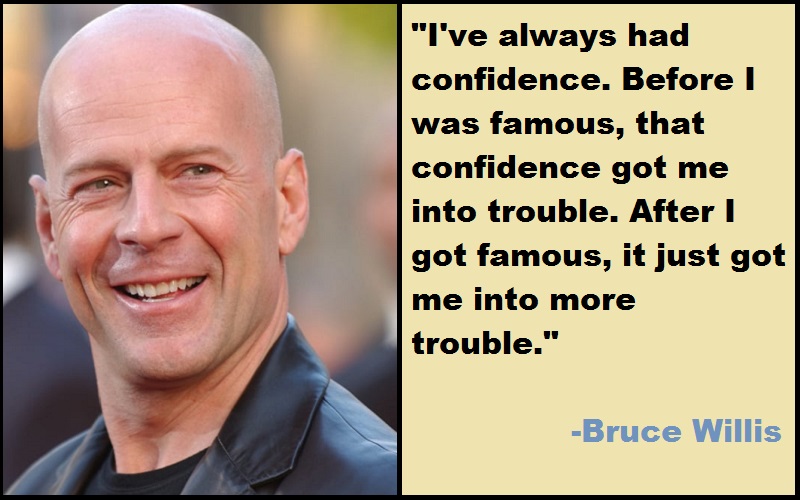 “You can’t undo the past… but you can certainly not repeat it.”-Bruce Willis

“I like having the dough to come and go as I please.”-Bruce Willis

“I would say, ‘I’m alone, but I’m not lonely.’ But I was just kidding myself.”-Bruce Willis

“I hate the government. I’m apolitical. Write that down. I’m not a Republican.”-Bruce Willis

“If you take guns away from legal gun owners, then the only people who would have guns would be the bad guys. Even a pacifist would get violent if someone were trying to kill him or her. You would fight for your life, whatever your beliefs.”-Bruce Willis

“I’m really just a regular guy who has had an incredibly blessed life.”-Bruce Willis

“Too many children in foster care are falling through cracks. Be a hero, take the time to learn about adoption today.”-Bruce Willis

“I believe injustice, and I believe in people being held responsible for their actions.”-Bruce Willis

“After I did the first Die Hard I said I’d never do another, same after I did the second one and the third. The whole genre was running itself into the ground.”-Bruce Willis

“I just have more fun when I get to try new things – and the action film genre has kind of painted itself into a corner, copied itself so many times and it has basically run out of bad buys.”-Bruce Willis

“Every day, I work at not taking this fame thing seriously. Fortunately, I have a great group of friends who help me do this.”-Bruce Willis

“I hate working out. Because I work out for films now solely I come to associate it with work.”-Bruce Willis

“Violence – look, we live in a violent world, man. This country was founded on violence. Who’s kidding who?”-Bruce Willis

“Everybody, no matter how old you are, is around 24, 25 in their heart.”-Bruce Willis

“If you catch him, just give me four seconds with Saddam Hussein.”-Bruce Willis

“I wake up laughing. Yes, I wake up in the morning and there I am just laughing my head off.”-Bruce Willis

“I have zero interest in performing in films to try to convey any kind of message. My job is to be entertaining. There’s a very different point of view about messages in films in Europe than there is in the States. Audiences rebel because they feel that they are being preached to.”-Bruce Willis

“I’m always being accused of being a Hollywood Republican, but I’m not! I have just as many Democratic ideas as Republican ones. If they could build three fewer bombs every month and give the money to foster care, that would be great.”-Bruce Willis

“Who I am as a father is far more important to me than the public perception.”-Bruce Willis

“I like a little movie I did in the early nineties called ‘Mortal Thoughts.’ The part was hardly written, but I learned a lot making it. No one remembers it.”-Bruce Willis

“There was a lot of dancing in ’76, ’78, in the ’80s. A lot of dancing. The burn years. A lot of dancing. And for a while, working fit in with all that. ‘Moonlighting’ – that wasn’t acting. It was people telling me ‘Let’s create a character who is you, so you can play him the way you are. The guy you are at night.’ It was fun.”-Bruce Willis