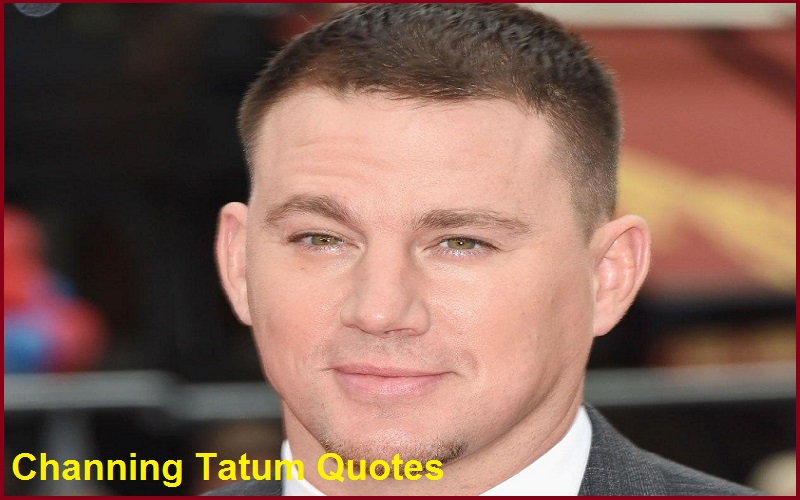 His breakthrough role was in the 2006 dance film Step Up, which introduced him to a wider audience. He is known for his portrayal of the character Duke in the 2009 action film G.I. Joe:

The Rise of Cobra and its 2013 sequel G.I. Joe: Retaliation. Although both G.I. Joe films received negative reviews from critics, they were commercially successful, grossing more than $300 million each at the box office.

“I can completely lose myself into just absolutely satisfying things – a really amazing cheeseburger, a pizza, good fries, a beer. I enjoy being comfortable and eating whatever the hell I like. It’s a big thing for me, just having the freedom to be able to do that.”-Channing Tatum 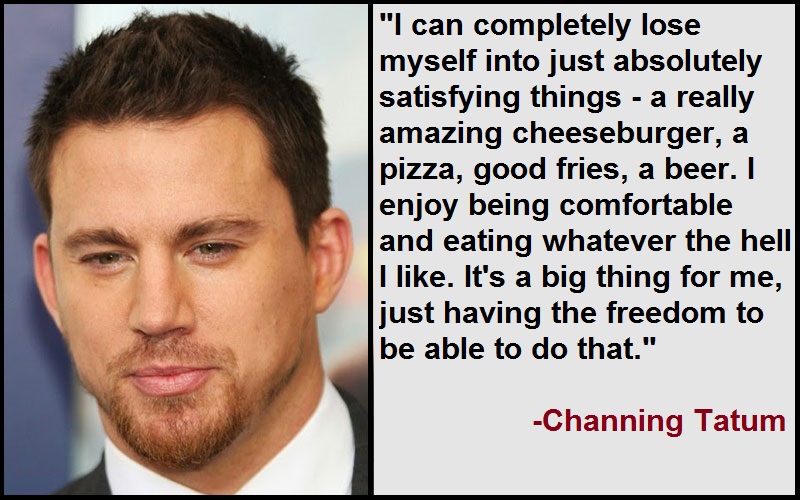 “Life is too short to miss out on the beautiful things like a double cheeseburger.”-Channing Tatum

“I’m thankful for weird people out there ’cause they’re some of the most creative people.”-Channing Tatum

I think we all suffer from guilt at some point in our lives, but for the most part, I never really regret, and I try to always remain positive.”-Channing Tatum

“I don’t know what you’re going through life doing if you’re not really trying to collect some really great memories.”-Channing Tatum

“The film is a direct mirror of the director. If your director doesn’t know how to dress, there will be an aesthetic of the film that won’t come through – whether it’s in the costumes if he doesn’t know exactly what he wants or the look of the film.”-Channing Tatum 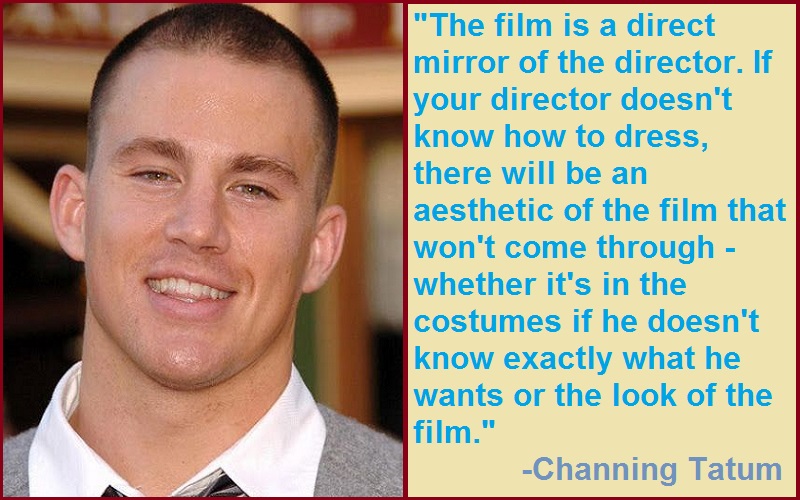 “The records that I like, they have life and warmth and soul in them. Like the slap back on Scotty Moore’s guitar on ‘Mystery Train.’ You’re not gonna get that in a computer. You’re gonna want a live room, you’re gonna wanna bounce the tape, you’re gonna want real musicians, in a room, vibing’ off of each other.”-Channing Tatum

“But I’m not a tough guy or a street fighter for real. I’m just an actor.”-Channing Tatum

“Girls were always my biggest distraction in school.”-Channing Tatum

“I’m not a comedian. I can play off of people, but I’m not that guy. I don’t want people being like, ‘Yeah, he should have stuck with drama.’ It would not be my choice to have critics mumbling that.”-Channing Tatum

“You have the dreams that you want, and then you have to do other jobs until you can get to that dream.”-Channing Tatum

“I still want to write Clint Eastwood a letter saying, ‘I’m sorry, I’m sorry for all us wimp actors. You’re the truth.’ I guarantee he’s not the person you want to fight, even now! You look at him, and you don’t want to mess with him. He would still take you down.”-Channing Tatum

“The more you try to look sexy, the lamer it is, so you just have to commit to the comedy.”-Channing Tatum

“My parents couldn’t handle my energy so they enrolled me in every sport the school was offering. I didn’t resent it because I loved sports and picked them up easily.”-Channing Tatum

“I like to be lean. If I get too bulky I can’t move well and I like to move. When I’m not training, I get really round and soft.”-Channing Tatum

“That’s something I do, like, all the time. I just do backflips off things.”-Channing Tatum

“There are so many things I want to do. Like, I want to get an artist, a musician, a photographer, and a bunch of dancers that I know and just travel across Africa and just film it and just see what happens. Do and learn as much as I possibly can. Luckily, I have a lot more time.”-Channing Tatum

“My bar for being successful is being able to do movies that really mean something to me and being able to make a living off of that.”-Channing Tatum

“In all the movies I’m in love with someone in my head. There’s always love in a film somewhere. It doesn’t matter even if it’s an action movie.”-Channing Tatum

“In all the movies I’m in love with someone in my head. There’s always love in a film somewhere. It doesn’t matter even if it’s an action movie.”-Channing Tatum