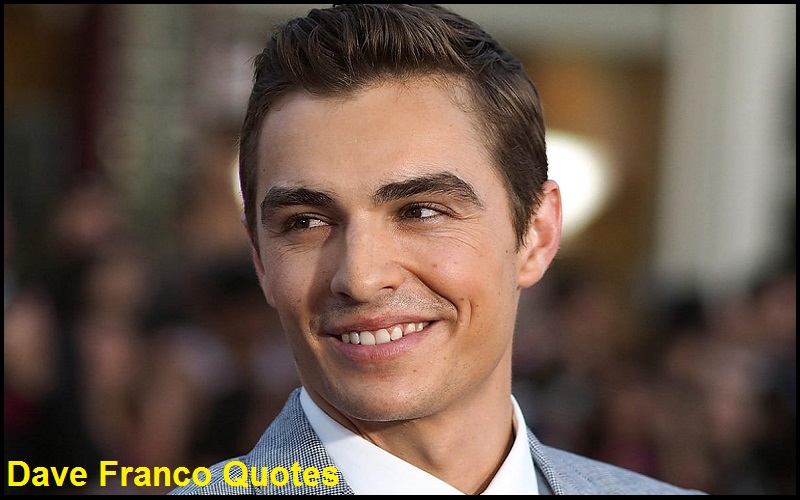 Dave Franco Quotes:- David Franco (born June 12, 1985) is an American actor. He began his career with small roles in films such as Superbad and Charlie St. Cloud. Following a starring role in the ninth season of the comedy series Scrubs, Franco had his film breakthrough as a supporting role in the buddy comedy film 21 Jump Street.

“I swear to God, that movie comes up more in my life than any other movie. Someone says ‘Bowfinger’ once every month or two to me. And how many years ago did that come out?”-Dave Franco 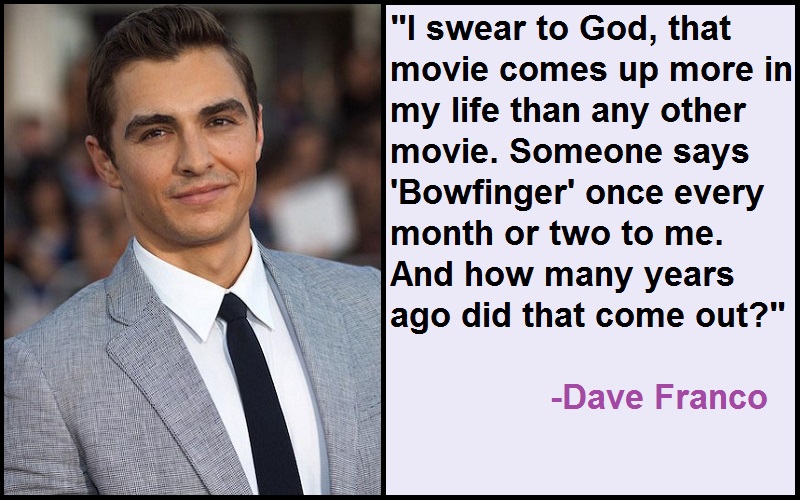 “Films are a director’s medium. We’re all stemming from the director.”-Dave Franco

“I just know that it’s smart for my career to carve my own path and do my own thing.”-Dave Franco

“It’s the most incredible feeling in the world when you finally land a job.”-Dave Franco

“As a young actor, you hear ‘no’ every single day for years on end.”-Dave Franco

“I don’t know if I was born weird. I think it’s just that I was exposed to very strange things from a very early age by my brothers.”-Dave Franco

“I think 99 percent of actors have gone through severe rejection before they ever landed a single role. I probably auditioned for 100 projects before I was cast in even the smallest role.”-Dave Franco

“I’m not one of those people who are, like, always joking in person.”-Dave Franco

“When I think of myself, I’m definitely… I’m not like a comedian.”-Dave Franco

“As much as I love and respect my brother, I’m doing my best to distance myself from him and kind of show people that, even though we do look similar and have similar mannerisms, we are completely different.”-Dave Franco

“To be honest, I was kind of a shy kid growing up.”-Dave Franco

“I think my first big purchase was actually for my mom. She had one of those ’90s TVs in her living room that’s like a 10×10 brick, so I purchased her a flatscreen for her living room.”-Dave Franco

“I can’t say I was like a die-hard zombie fan, but I’ve definitely seen a few different zombie movies and TV shows.”-Dave Franco

“You’re in high school, and you’re telling your friends that you’re skipping lunch to go write poetry, and they were all questioning my sexuality.”-Dave Franco

“I’ve always loved to write. I’ve been writing a lot longer than I’ve been acting, and I hope to continue to do that and maybe do it a little bit more in terms of, like, writing movies that I could potentially act in.”-Dave Franco

“For example, for me, my brother helped me get a manager, which I don’t take for granted. It’s tough getting a manager, let alone one that actually cares about you and is smart. But from there, no one’s going to cast me just because I’m James Franco’s little brother.”-Dave Franco

“I’ve been lucky enough to, for the most part, surround myself with a lot of people who are more talented than me and who I can learn from, and it makes me up to my game.”-Dave Franco

“When you look at other good-bad movies like ‘Sharknado’ and ‘Birdemic,’ those movies know that they’re B movies, know that they’re silly and over the top, as opposed to ‘The Room,’ where Tommy Wiseau, the guy at the center of it all, he attempted to make a very earnest drama.”-Dave Franco

“I went to USC where there’s a huge Greek system. The school is in a pretty seedy area, so the only social life is at these fraternities. I never joined one myself, but I had a lot of friends who were in frats and I would go to those parties. I had a healthy dose of being around frat life while I was in school.”-Dave Franco

“My brand of humor is trying to play the situation as real as possible because I’m not the type of guy who is a joke a minute.”-Dave Franco

“My secret is just surrounding myself with people who are a lot funnier than me.”-Dave Franco

“I love working with family and friends because, as an actor, it makes my job easy. I feel comfortable with all of these people, and I feel more willing to take risks.”-Dave Franco

“No one ever sets out to make a bad movie. There’s almost always an incredible amount of passion and work put behind any given project. You just have to give it everything you got, and sometimes it works out, and a lot of the times it doesn’t.”-Dave Franco

“It’s a weird thing about our business: You give everything you have, and there are moments where you go back and forth in your mind about if what you’re doing is brilliant or a total disaster.”-Dave Franco

“I guess I’ve kind of recognized what my worth is and what my specific brand of humor is. And that’s not necessarily being the guy who’s super witty and saying a joke every second. I’m the guy who you throw in a bizarre scenario, and I’ll play it as real as possible.”-Dave Franco

“I think – in general, I don’t think I’ve been involved in a single movie that turned out the way I anticipated it to turn out. Just because, as an actor, there’s only so much that I can bring to a project.”-Dave Franco

“You can’t make a good movie with a bad script, no matter who’s involved.”-Dave Franco

“I was just so nervous every time I was on stage. It took me many, many years to get to the point where I realized, ‘All right if I’m going to keep doing this, I’ve gotta remember that it’s supposed to be fun. I’ve gotta stop putting so much pressure on myself because otherwise, it’s not worth it.’ And I still am too critical of myself.”-Dave Franco