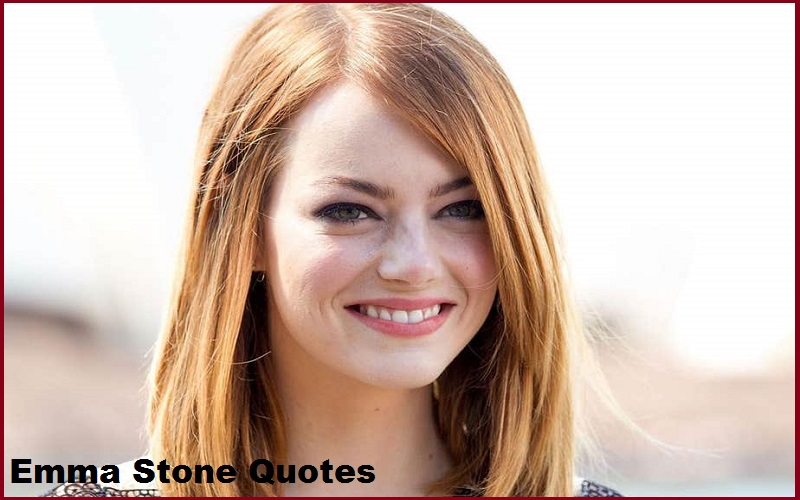 Share Tweet Pin it Email WhatsApp
Emma Stone Quotes:- Emma Stone (born November 6, 1988) is an American actress. The recipient of numerous accolades, including an Academy Award and a Golden Globe Award, she was the highest-paid actress in the world in 2017.
Stone has appeared in Forbes Celebrity 100 in 2013 and in 2017, she was featured by Time as one of the 100 most influential people in the world.

“My favorite thing about movies is the ending, and so all my favorite movies have really great endings.”-Emma Stone 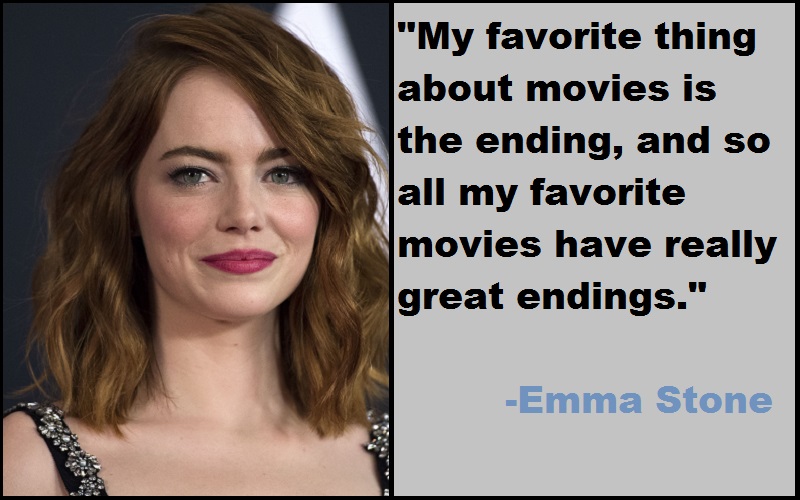 “I think there are plenty of soulmates out there. That’s what I choose to believe.”-Emma Stone

“You know how sports teach kids teamwork and how to be strong and brave and confident? Improv was my sport. I learned how to not waffle and how to hold a conversation, how to take risks and actually be excited to fail.”-Emma Stone

“I’ve never played someone where I felt it was beneficial to build from the outside in.”-Emma Stone

“The roles that have come into my life have taught me – and in that time period maybe I didn’t even know it, but whatever came up or whatever it is that you have to express at that time, has benefitted me in a particular way.”-Emma Stone

“If I feel strongly about anything, I get overwhelmed with emotion.”-Emma Stone

“Comedy’s my first love. I love that so much. You play comedy in drama, too. The difference between genres doesn’t really change the method of acting.”-Emma Stone 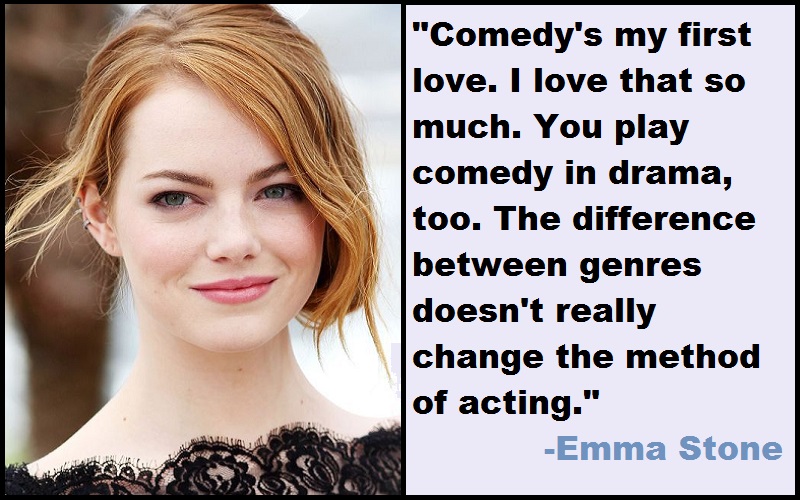 “I just like to keep working and being able to pay my bills.”-Emma Stone

“Yes, you should be healthy and take care of yourself, but growing up, I’ve seen people who have horrible issues with food.”-Emma Stone

“When I was 14 -years old, I made this PowerPoint presentation, and I invited my parents into my room and gave them popcorn. It was called ‘Project Hollywood 2004’ and it worked. I moved to L.A. in January of 2004.”-Emma Stone

“I had massive anxiety as a child. I was in therapy. From 8 to 10, I was borderline agoraphobic. I could not leave my mom’s side. I don’t really have panic attacks anymore, but I had really bad anxiety.”-Emma Stone

“So one day, in a fit of trying to do something different, I just dyed my hair dark brown and got my first role a week later, after which I thought: ‘People are closed-minded, man! Like different hair color changes everything!”-Emma Stone

I was just a ham since about the age of five. If I was performing at Medieval Times or something, I’d be the court jester. That was always my defense mechanism. I was never all that funny; I was just obnoxious and loud.”-Emma Stone

“My parents are both very funny but they’re also relatively soft-spoken, normal human beings while I’m just a lunatic. I don’t know where this loud, ballsy, hammy ridiculousness came from. I’m just glad I followed my goals and my parents did too. It’s not like we even had a plan when I dragged my mom to Los Angeles.”-Emma Stone

“When I look back, I don’t have regrets. At the moment I am really, really hard on myself, I’m definitely my own worst critic and can be my own worst enemy, and I’m trying very hard not to be that.”-Emma Stone

“Comedy was my sport. It taught me how to roll with the punches. Failure is the exact same as success when it comes to comedy because it just keeps coming. It never stops.”-Emma Stone

“Just because I don’t have a college degree doesn’t mean I am not smart!”-Emma Stone

“I really like grammar. And spelling. I was a spelling-bee kid. I’m hard-core about grammar.”-Emma Stone

“I used to do Facebook but you get a little too wrapped up in that stuff. It’s more distracting than anything so I don’t anymore. I left it behind. I detoxed!”-Emma Stone

“Often, joking for me is a way of diffusing the awkwardness of a situation, so it’s kind of exhilarating to be a part of projects where there’s nothing funny or lighthearted.”-Emma Stone

“I’m actually the last person to ask about school. I kinda ducked out at 12, before all that stuff might have happened. I left school after sixth grade and was basically home-schooled after that.”-Emma Stone

“He’s my favorite! He wrote and produced, and starred in and cast all of his movies! Can you imagine? I get really excited when I talk about Charlie Chaplin.”-Emma Stone

“Running is bad for your knees, and I like to do things I actually enjoy, like going for a swim.”-Emma Stone

“Arizona is the worst place to spend the summer – it’s like 125 degrees – so my mom, my brother and I would go to the beach for two months to escape the heat.”-Emma Stone

“The last thing in the world my parents would want to do is get on a stage or do a movie. They would probably rather die. But they let me be who I was, and they supported me.”-Emma Stone

“I always loved acting and improv and sketch comedy and theater, which I did at a local youth theater.”-Emma Stone

“A lot of times, I feel like people come up to me because they think I’m like my character in ‘Easy A’, or because they’ve seen me in interviews, but really what they’re a fan of is a movie or a character.”-Emma Stone

“I love improv. ‘Crazy, Stupid, Love,’ the script was really great, but the directors were open to letting you try different things. And that felt like a muscle I hadn’t exercised in a really long time.”-Emma Stone

“My life is PG-13 sometimes, and I really want Josh Grogan to propose to me, and he just won’t do it.”-Emma Stone

“I think women should wear whatever makeup they want for themselves. Makeup should be fun.”-Emma Stone

“Drama is hard for me. Crying is much harder for me than laughter.”-Emma Stone

“You won’t hear me saying I have nobody issues because I wouldn’t be human if I didn’t.”-Emma Stone

“I was very lucky with the parents I was blessed with. I don’t think it could have worked out any better. They’ve always been so understanding of me and understanding of what I want to do.”-Emma Stone